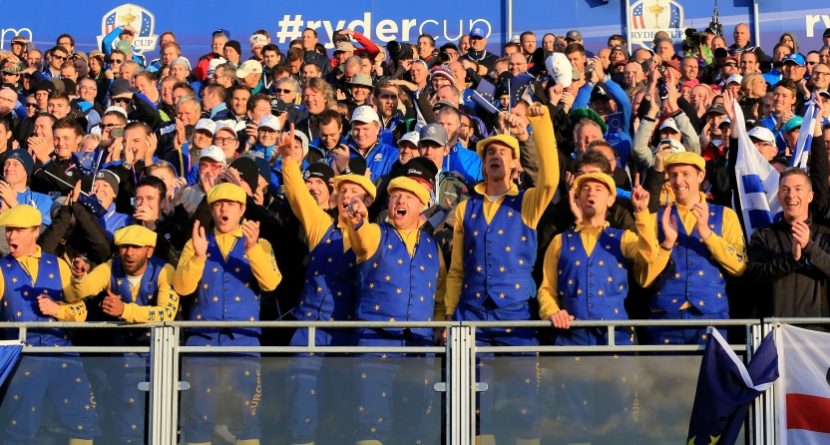 GLENEAGLES, Scotland — It’s the noise that gets you. The deafening noise.

At every other golf tournament on the planet, players are respectfully applauded to the first tee. A ripple of applause greets the announcement of their names and follows their opening tee shots.

Not at the Ryder Cup. The first hint you have that you have arrived at something special is when you pull up in the car park at 6 a.m., in the dark, and have to queue to get in. Welcome to the 2014 Ryder Cup.

When you get in, there is the surreal view of players on the range, hitting golf balls into the distance under floodlights. Everywhere you look there are people. Thousands of people.

With the grandstands fast filling up, even though the first tee time is still 90 minutes away, you know that you have to find your spot behind the first tee if you want to be part of this.

By 7 a.m. there is not a seat or standing space to be had. And then the singing and the chanting begins. “Europe, Europe!” “Ole ole ole, ole.” “There’s only one Ian Poulter, one Ian Poulter.” Every chant is greeted with a roar.

It is like no other golf tournament on the planet. A grizzled old Scottish journalist standing next to me mutters: “We’ve created a monster.”

But what a monster. The atmosphere is joyous. Noisy yes, but joyous.

And then, finally, the players. Justin Rose and Henrik Stenson are roared to the hilt, followed, almost unnoticed, by Bubba Watson and Webb Simpson. By now, the crowd are in a frenzy.

It’s chaos. Even Ivor Robson, that most experienced of starters, seems to have been affected by it. The Americans have the honour and, with Webb Simpson ready to drive, Robson announces: “On the tee … Bubba Watson.” He quickly corrects his mistake and Simpson splits the fairway with a three wood. Then it’s Bubba. He orchestrates the crowd, encouraging them to cheer. Louder! No, louder than that! And accompanied by a wall of noise, he blasts away his opening drive into the distance.

By contrast, there is silence for Rose and Stenson as they address the ball. We are rewarded with two superb drives.

A small group of American fans attempt to rally the troops. “USA, USA”. Back comes a torrent of friendly boos. Everybody has a smile on their face.

Next up it is Thomas Bjorn and Martin Kaymer against Rickie Fowler and Jimmy Walker. There is some friendly banter aimed at Fowler’s haircut. And then they too are on their way.

Then the moment all Scotland has been waiting for. Stephen Gallacher and Ian Poulter arrive on the tee. The noise is deafening. Gallacher, a quiet man who goes about his business with the minimum of fuss, is clearly loving it. He acknowledges the applause. And the more he acknowledges it, the more they cheer. “One Stevie G ,there’s only one Stevie G …” His partner is loving it all too. “Ian Poulter, Ian Poulter, walking in a Poulter wonderland.”

They are playing Jordan Spieth and Patrick Reed. The two Americans find the fairway. Gallacher carves his drive right. But Poulter hits it straight as an arrow.

Three matches started, one more to go. Rory McIlroy and Sergio Garcia can’t hear themselves think as they emerge from the tunnel to the first tee. By now, there isn’t a cloud in the sky. Watson warmly embraces Keegan Bradley and Phil Mickelson, who have the task of keeping these two European giants quiet.

Bradley looks nervous – and hits his opening drive miles right. Mickelson finds the fairway. So does Garcia. And so, inevitably, does McIlroy – fully 30 yards ahead of everybody else. As they walk off the tee, McIlroy and Garcia turn to the crowd and wave. The noise levels rise once more.

The 2014 Ryder Cup is off and running. Welcome to Gleneagles.