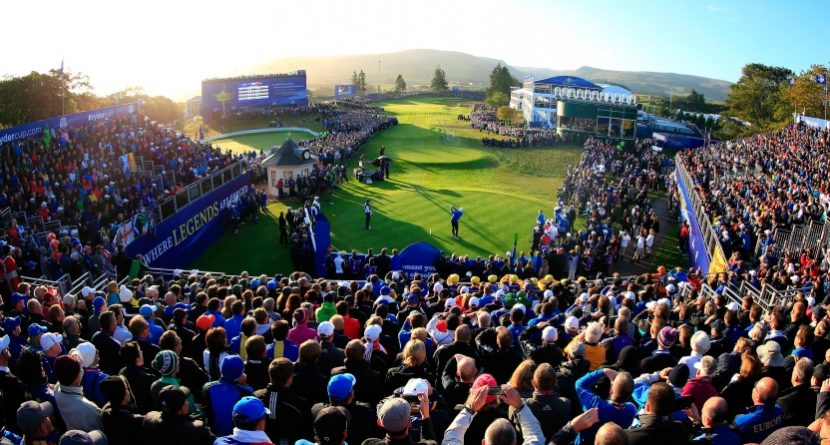 GLENEAGLES, Scotland — Gleneagles is in the middle of nowhere — and I really do mean the middle of nowhere. It is serviced by roads so narrow that two cars going in opposite directions have to slow almost to a halt to pass one another. That is a problem because, for the most part, buses are the only way in or out of this place.

And yet, by the time Webb Simpson hit the opening drive of the 40th Ryder Cup, the first hole was encircled by at least 15,000 delirious golf fans. All told, there are 45,000 spectators at the course, along with a mind-boggling 9,000-person staff.

There are also more than 1,000 journalists covering the event — and although the match features the cream of Europe taking on the best that the USA can offer, the media have come from all over the world: Australia, Japan, Korea, China. What began as a challenge match sponsored by an English seed merchant has become one of the biggest sporting events on the planet.

More than anything else, though, it is about the fans. Almost all of them arrive at the course in buses, thousands of buses, and everything is planned with military precision to ensure they arrive at the course on time. At the end of the day they have to queue up for the journey back to Glasgow, Edinburgh, Perth, Stirling or wherever else they are staying.

This being the Ryder Cup, they come in their own national colours, or in fancy dress. I have seen Captain America, I have seen entire groups dressed from head to toe in Stars and Stripes suits. Then there are the Leprechauns, the kilted Scots, the sombrero-wearing Spaniards. There was even a group of Americans wearing kilts!

Speaking of fancy dress, who on earth was responsible for designing those awful European tops?

Fans Having Fun, But Can’t Spur On Gallacher

The overriding theme is that everybody is here to have fun. It is almost a condition of attending the Ryder Cup. “Sorry sir, but you look miserable. We can’t let you in until you come back with a silly grin on your face or a stupid hat on your head.”

Then there are the roars. With 45,000 people following four matches, it is not easy to see a great deal. But if a European putt drops, you can probably hear the noise from Edinburgh. Sergio Garcia holed a bunker shot at the fourth and there was a chain reaction — first, the roar of those who were by the green, then the cheers of those listening on radio, followed by yet another cheer when his birdie 2 was recorded on the scoreboards around the course.

If they are not cheering, they are singing. There is no major like it. Or any other tournament, for that matter.

Sadly, there wasn’t much cheering for Stephen Gallacher, the only Scot on the European team, and the player that the home fans were desperate to see do well. He was playing with Ian Poulter, the European team’s so-called talisman. They were playing Jordan Spieth and Patrick Reed. What could possibly go wrong? Plenty, as it turned out.

Gallacher hit a wild drive at the first. Never mind, Poulter would sort it out. He put his approach at the opening hole into a greenside bunker and played a beautiful recovery. A half, surely. Except that Poulter missed the putt. A Reed birdie at the sixth followed by one from Spieth at the seventh and the European pair was down three.

Oh dear. This wasn’t in the script. No sign of Poulter’s bulging eyes as yet then. But he doesn’t lose four-ball matches. He would soon start rolling them in from all over the place, wouldn’t he?

The fans were trying their best with Gallacher. “Come on Big Man, you can do it.” “Away Stephen, you’re the man.” Except that he couldn’t do it and, on this day at least, he wasn’t the man. He had a glorious chance to birdie the eighth, but his putt dribbled past. His shoulders slumped. It was impossible not to feel for him. Everybody wanted him to play well. Everybody other than Spieth and Reed.

It went from bad to worse. Three birdies on the trot put the American pair six up and although Gallacher won the 12th with a par, he was simply delaying the inevitable. Tom Watson had said that he wanted to target Poulter, but there was no need. His Medinah touch had deserted him.

In truth, it was almost a relief when the Americans won 5 and 4.  Gallacher’s day was done. More surprisingly, Poulter was also left out of the afternoon foursomes.

The rest of us, meanwhile, joined the queues for lunch. Speaking of which …

Lines And Lines For Days

If this Ryder Cup really is all about the fans — and it is — who on earth made the decision to allow 45,000 into the Centenary Course at Gleneagles to watch four matches?

At least Phil Mickelson, Keegan Bradley, Sergio Garcia and Rory McIlroy gave them their money’s worth by taking a stultifying five hours and 20 minutes to play 18 holes.

So the choice came down to this: Do you find a grandstand and sit and watch all four matches go through, or do you attempt to follow one match? Choose the former, and you are at least guaranteed to see every player hit an approach and a couple of putts. You might even get to see the great bulging eyes of Ian Poulter or Keegan Bradley. Mind you, there wasn’t a lot of eye work going on with Poults in the morning, and if you chose to sit beside the 16th, then you didn’t see him and Stephen Gallacher at all since they lost 5 and 4.

Justin Rose and Henrik Stenson had their morning finished early too, also finishing on the 14th green.

So you decide instead to get in among the action. And what do you see? Well, if you are very, very lucky, you might get to see three or four shots being struck. You will know what is going on because the noise will tell you. You sure don’t need to ask if a European has just holed a winning putt because you will hear a deafening roar. A missed putt come will come with an “Ooooooh,” and an American birdie with a quiet cheer and gentle applause.

Eventually, you will conclude that it is time to get something to eat — a decision you may soon come to regret, especially if you have gone off to get a snack or a drink with the words. “Back in a minute, honey.” Oh no you won’t!

The queues are endless. Thankfully, we are good at queues in Scotland. But, really, having to wait up to 40 minutes for an overpriced burger really isn’t on.

We are told that there are some 3,500 American fans here. What do they make of it? “Hey man, it’s the Ryder Cup,” John Travers, from Dallas, Texas, told me. “We are just so happy to be here.”

“So you don’t mind waiting ages for your food and then having to join another queue for a drink and having to start all over again?”

“I know what you mean man, but at least you get the chance to talk to people you have never met before, and everyone seems to happy.”

Happy? Mr. Travers was clearly looking at the wrong faces. Well, at least it wasn’t raining.

Tales of the Unexpected author Ross Biddiscombe says this is the first time in many years that an accurate income number from television, sponsorship, hospitality, ticketing and merchandising has been published.

“In recent times, organizers on both sides of the Atlantic have become extremely sensitive about the income from the Ryder Cup, but the £65m figure is a product of extensive research and some excellent sources,” Biddiscombe says.

“There should be no reason for the secrecy because the event is one of the best operated in the world of sport, the tickets are not that expensive compared to similar tournaments and millions of pounds come back into the sport,” he says.

The fact that the players don’t get paid and are happy to put their reputations and nerves on the line without being handed a seven-figure paycheck tells you everything you need to know. Money seems to drive everything in golf these days, but for the 24 men lucky enough to be chosen for the Ryder Cup, pride is enough. Pride is more than enough.