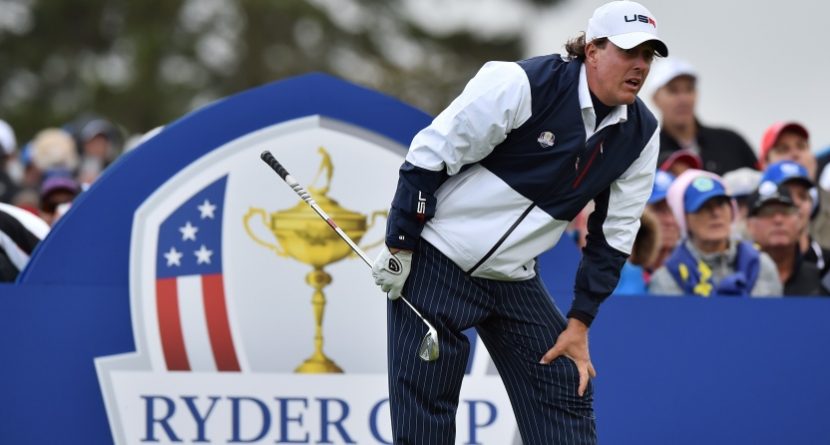 GLENEAGLES, Scotland — There was a major surprise Saturday at the Ryder Cup when U.S. captain Tom Watson decided to leave out Phil Mickelson from both sessions. In the past, that possibility would have been unthinkable.

Mickelson has been out of sorts all season, and only squeezed into the team as a result of his good performance at the PGA Championship. But there must now be doubts as to whether we will see him play in another one of these competitions.

He is 44 years old and this is his 10th Ryder Cup. Nobody is suggesting that he won’t be good enough at 46, but he suffers from arthritis and that certainly isn’t going to improve as he gets older. It was also abundantly clear that he was feeling the cold on Friday morning.

Rory McIlroy upset a lot of people when he suggested that Mickelson and Tiger Woods were playing “their final few holes,” but he is right. How many players are still winning tournaments after the age of 44? Miguel Angel Jimenez, Vijay Singh, erm…. you get my point?

Mickelson has been a Ryder Cup stalwart, but his record isn’t actually very good. He has only been on the winning side twice, and the less said about his individual record the better. He probably has more fond memories of the Presidents Cup. In 10 appearances in that event, he has played on the winning side eight times.

There is not a person in Europe who wants to believe this is his final appearance, but it might well be. He is certain to be named as a future captain — now that would be an American team worth watching!

Dressed For A Night Club, Not A Golf Club

Over the years, I have seen and heard many things, but human beings still have the capacity to astonish me

I would like you to paint a little picture in your head. Imagine that you are a woman who doesn’t play golf and your husband has asked if you would like to accompany him to the Ryder Cup. If you don’t play golf, your first question may well be: “What’s the Ryder Cup?”

But let’s assume that you are a woman who knows what the Ryder Cup is. OK, so you don’t play golf, but your husband does. That means you see him leaving for the course and coming home from the course. Who knows? You may even be the person who washes and irons his golf clothing.

You would think that would give you a pretty good idea of what you should wear to a golf tournament in Scotland then, wouldn’t you? All right, so you may not get to see his golf shoes terribly often if he is the typical golfer who never cleans or polishes them. But you would have a pretty fair idea of what they look like, wouldn’t you?

Bearing all of the above in mind, could you now explain to me why I came across a woman being treated beside an on-course ambulance, having obviously taken a bad fall while attempting to keep up with her husband. She was wearing a tiny jacket, a skirt that was fully six inches above her knee, and … I can hardly even bring myself to write it … high-heeled shoes! Now when I say high-heeled shoes, I am talking five- or six-inch heels. Thin heels.

She appeared to have broken her ankle. Even if this woman wasn’t fully aware of what she was going to watch, don’t you think that her husband might have mentioned to her that a short skirt and fashion shoes really weren’t suitable attire for watching golf?

And there’s more. I am sorry, because I know that this is going to come over all sexist, but I am simply here to tell you what I see and hear. I was standing near the third tee watching Justin Rose, Henrik Stenson, Bubba Watson and Matt Kuchar in their Saturday four-ball match. One after the other, they drove off, and I became aware of a woman complaining to her husband after each drive that she couldn’t make out where the players’ golf balls had finished.

“It is really inconsiderate. We have paid all this money to get in and I can’t see a thing. Why don’t they use that thing on their golf balls that we see on TV?”

“What on earth are you talking about?”

“You know fine well what I mean – that red ribbon thing that trails from the ball so you can follow it.”

She was, of course, talking about Pro-Tracer, the TV technology!

You couldn’t make it up …

Eyes Of The World On Ryder Cup

There are more than 1,000 journalists officially credentialed at Gleneagles this week. When you consider that as recently as 1979, the American media had little or no interest in the Ryder Cup, it represents a massive explosion of interest.

When you throw in TV, radio and Internet coverage, the Ryder Cup has now become one of the biggest sporting events on the planet. And yet there is still no prize money.

So, why the transformation? There a many reasons. Among them, the balance of power shifted in the 1980s and the cup has never been the same since.

But more recently, take a look at the world rankings of the 24 players at Gleneagles this weekend. Eleven of the world’s top 13 players are in action and 14 of the top 20. The lowest ranked player is Lee Westwood, at 44.

Where else would you get so many world-class golfers together on one course, trying to beat each other’s brains in? There are many in Europe who secretly wish for an American victory at Gleneagles because the last thing on earth that any of them want is for the U.S. to lose interest because it keeps getting beaten.

For now at least, the interest will remain and the story of the Ryder Cup will continue to be told all over the world.