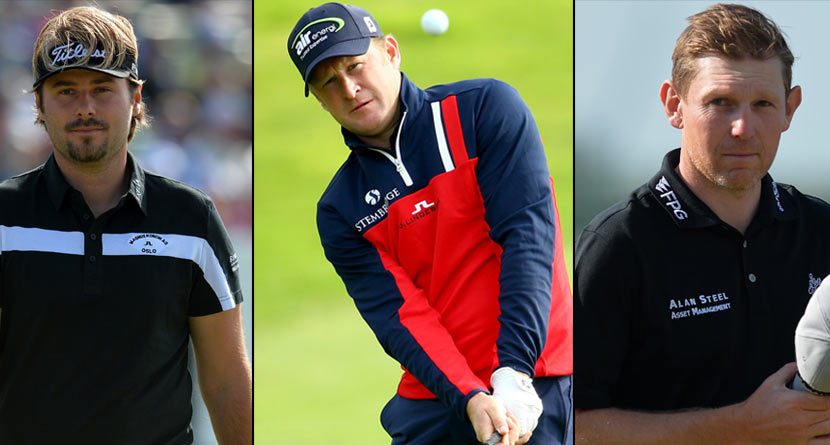 As Ryder Cup week begins, each team has a few players experiencing the sensation of representing their nation for the very first time.

The Europeans boast a potent roster that includes world No. 1 Rory McIlroy, No. 3 Sergio Garcia and last year’s FedExCup champion Henrik Stenson, among other stars. The roster also includes Victor Dubuisson, Jamie Donaldson and Stephen Gallacher, all of whom will be making their Ryder Cup debuts.

Here’s a close look at the European rookies at Gleneagles:

Victor Dubuisson
Victor Dubuisson has long been a name on the lips of European golf experts, but he burst onto the global stage this past February with his runner-up finish at the WGC-Accenture Match Play Championship. After 18 holes failed to settle anything, Dubuisson continued to press eventual winner Jason Day with one phenomenal up-and-down after another. Since then Dubuisson hasn’t won, but he did collect top-10 finishes in each of the season’s last two majors. He collected his first career victory last November at the Turkish Airlines Open.

Jamie Donaldson
Jamie Donaldson has been playing professionally since 2000 and will be making his first career appearance at the Ryder Cup. Donaldson has won three times on the European Tour, including the D+D Real Czech Masters this past August, which secured his spot on the roster. Donaldson, who has enjoyed a career year in 2014 even before making Paul McGinley’s team, also has five top-five finishes and two runner-up showings to go along with that win. He’s currently third in Race to Dubai standings.

Stephen Gallacher
The third rookie member of Team Europe is 39-year-old Stephen Gallacher. Another player on McGinely’s roster enjoying a terrific year in 2014, Gallacher got the 2013-14 campaign started on the right foot by winning the Omega Dubai Desert Classic. Since then, he’s been unable to notch another victory but has played some very solid golf. Along with the win, Gallacher has a runner-up at the Nordea Masters and a third-place finish at the Italian Open a few weeks ago. Unlike Donaldson and Dubuisson, however, Gallacher was one of McGinley’s three captain’s picks, along with Ryder Cup veterans Lee Westwood and Ian Poulter.