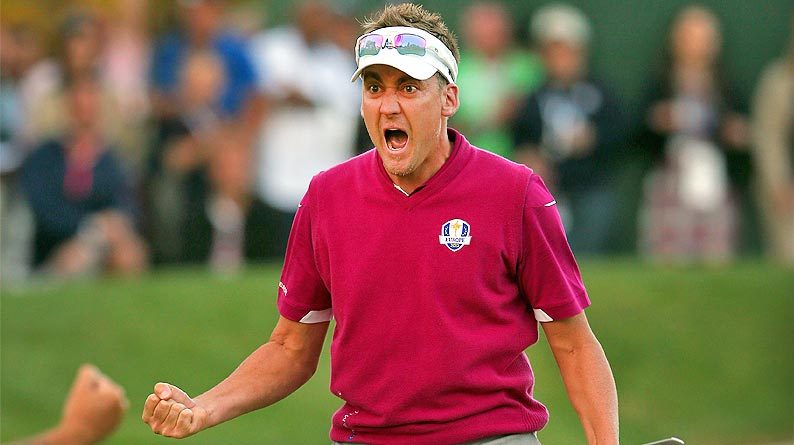 Not even the fabled trash talk of Michael Jordan can shake match-play ninja Ian Poulter. In case you missed it, “Unfiltered with Ian Poulter,” the Englishman’s new radio show on SiriusXM, debuted this week. During the program, Poulter relived an amazing, previously unknown Ryder Cup moment involving the basketball legend.

“He was right there,” Poulter said of Jordan. “He was there on 13 and I remember walking off the tee box at 13, looking over and he kind of wagged his, I don’t know if you can call it a finger, it looked like an arm. This big finger came up and he was wagging it at me, pulling a face as if to say, ‘We’ve got ya, we’ve got ya.'” Jordan didn’t leave Poulter or his European mates alone after that, he followed them. Jordan and his giant finger made another appearance on 15 as Poulter lined up his birdie putt.

“Jordan was standing there again and he’s just looking at me, staring at me, and I’m like, “This is, this is, this is amazing. It’s what I live for. This is what makes sport great,'” Poulter said. “There’s [legendary] basketball player Michael Jordan psyching me out in the Ryder Cup. And you know what? I said, ‘Screw you, I’m gonna hole this putt.'”

“But you know what?” Poulter continued. “He’d done that for so many years on a basketball court. He hit the shot time and time again. I said to myself, I’m just, I’m not allowing him to get in my space. It’s not like he was in my space but he was there. He was there and he was playing his basketball game. And you know what, it was my court and he’s not playing ball so… I holed the putt on 15.” The encounter with Jordan wasn’t quite over, though.

Poulter said, “Jordan [was] standing right in my space, I’m walking to the 17th tee. This claw hammer of a fist of his, he just keeps it out in front of him and he kind of wags his finger and he gives me a little jab in the chest with his fist. It was like a sledgehammer hitting me. It was ridiculous. That was a sign of respect in a way.”

With the fiery Poulter leading the charge, the Europeans capped an epic comeback, the largest in Ryder Cup history, to claim victory and retain the Cup despite the valiant efforts of the American squad and one basketball icon.

“There’s something that comes out of me in the Ryder Cup, I don’t know what it is,” Poulter said. “When I fist pump, when it means that much, there’s like a hand grenade going off inside my body. I love it, the adrenaline comes out, the excitement comes out, I fist pump, get excited and I try to rev our fans up.”

To hear the full story, check out the link below. Other Hot Links:
– TV Preview: Back9Network Original Programming
– Photos: The Many Faces of Ian Poulter
– Ray Allen: ‘He Got Game’ Sequel May Be On Its Way
– Does the USGA Have the Answer to Slow Play?
– PING’s New Ad Explodes Onto Social Media