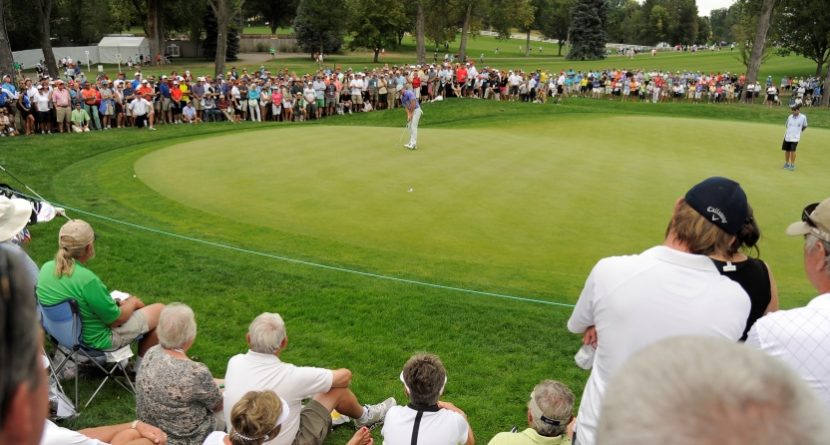 The BMW Championship announced late Wednesday that tickets for Sunday’s final round at Cherry Hills had been sold out, and those on offer for Saturday were also nearly depleted. There are 27,000 available per day.

So it appears as if fans in the Denver area, who haven’t witnessed a live PGA Tour event since 2006, like them some golf. Might the tour explore returning to the area on a regular basis?

For one, the PGA Tour’s schedule is pretty packed, especially from June to September, the most ideal time of year for golf in Colorado. Unless another tournament folds, is canceled or for some reason is taken off the schedule, there’s no room for any new events, let alone one near Denver.

“There wouldn’t be any hesitation about a tour event here,” PGA Tour commissioner Tim Finchem told the Denver Post. “We’d be excited about it. We would love to play here on a regular basis. There are great sports fans here. We’re seeing it this week. And there are good golf courses here.”

One of those layouts is in Castle Rock, about 30 minutes south of Denver, where The International was played on the PGA Tour from 1986-2006 at Castle Pines Golf Club. Not coincidentally, that tournament ended when the FedExCup playoffs began. The new PGA Tour schedule required some shuffling of dates, and Castle Pines was reportedly asked to be one of the playoff events. It declined because tournament director Jack Vickers didn’t want his tournament to be played during football season, and because he didn’t want to relinquish control of how the event was run.

“I’m either going to do it right or I’m not going to do it,” Vickers said on Feb. 8, 2007, the day he announced The International’s cancelation.

Now, the more likely opportunity for a Denver-area course to regularly get back on the PGA Tour schedule would be to get on a rotation to host an event like the BMW Championship. According to the Denver Post, Finchem said that could happen with Cherry Hills, but no official talks of such a “rota” have been had.

As for an annual event, even if a date opened up, none of the courses near Denver with past experience hosting a PGA Tour, LPGA Tour, Champions Tour, or other major golf tournament seem to have interest in opening up their tracks to so many fans every year. According to Mile High Sports Magazine, Castle Pines members “are really enjoying having their golf course.” Same goes for three other clubs mentioned.

So maybe that’s why Denver fans are turning out in droves for the BMW Championship – they have no idea when or if the world’s best golfers will ever return.