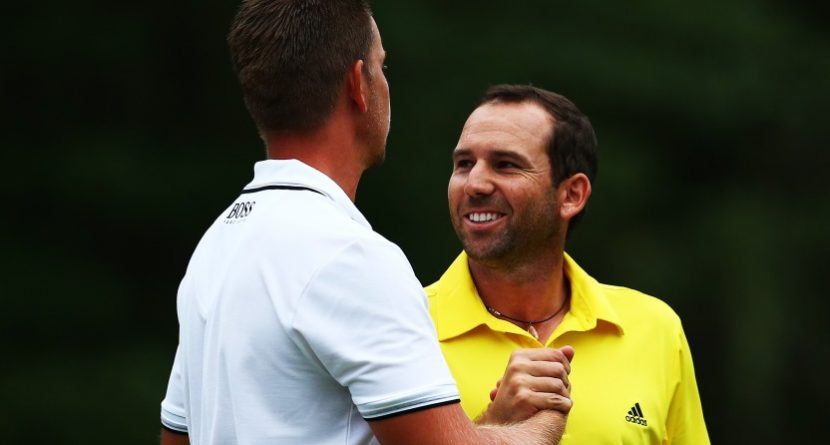 Sergio Garcia became a popular target for haters on Monday. The Spaniard led the Deutsche Bank Championship at TPC Boston by two strokes after 54 holes, then turned in a 2-over-par 73 in the final round. Only six of the 76 golfers on the course played worse on Monday.

But despite his lackluster day, there was Garcia smiling and bro-hugging the winner, Henrik Stenson.

“Henrik’s a good friend of mine and he deserves it,” he said afterward. “He’s been playing well all year.”

As Garcia slowly handed over his best chance to win in 2013, he kept his cool. No drivers were tossed into lakes. No wedges were smashed into bunkers. No complaints were issued post-round. He was honest as always.

“I just wasn’t comfortable,” Garcia told the media. “I wasn’t able to trust myself as I did the first few days.”

And that’s what we love about Garcia — he tells you exactly how he feels, good or bad. Sometimes that gets him into hot water, but at least he’s talking. With a lot of pro athletes these days it’s like pulling teeth to get them to say anything interesting. They’ve become so good about answering questions without really answering questions.

Furthermore, Garcia just shows a passion that a lot of golfers lack. If he hits a bad shot, he expresses that. If he hits a shot he thinks could be good, he sprints after it to get a good view of the landing. If he sticks a ball in a tree, he climbs up and knocks it out; he doesn’t take a drop. That’s why he’s captivating.

On Monday, Garcia may have relinquished first place for the eighth time at the last 11 tournaments in which he held at least a share of the 54-hole lead. But the fourth-place tie marked his best result in nearly six months. He jumped from 55th to 24th in the FedExCup standings with two events left to go. He looks set to compete in the Tour Championship, which includes only the top 30 players, for the second straight season.

When athletes handle themselves with dignity they win in a different sense. It’s easy to sit and watch from a distance as a golfer struggles, then label him a choker. It’s tougher and more bold to be the first man to graciously congratulate the player who took away a title that was seemingly yours.

Garcia will get in the winner’s circle soon. From all of us at Back9, we wish him the best.

Other Hot Links:
– Back9 in 90: Stenson Steps Up
– What’s Hot: Nike Gives You a Swing Coach
– Tweek In Review: Tweets Of The Week