Sergio On Tiger: ‘I Don’t Need Him’ 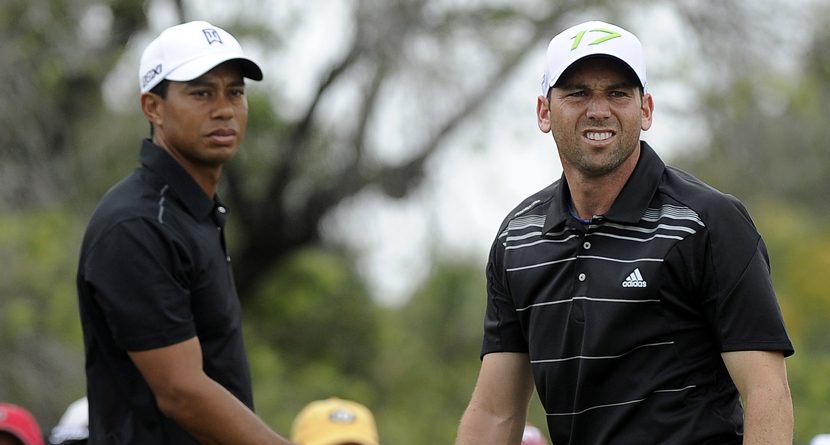 This Tiger Woods vs. Sergio Garcia tale gets better by the day.

Yesterday we wrote about Woods’ response to the question of whether or not he would reach out to Garcia to patch things up between the rival golfers.

His answer was a defiant “No.”

And then Garcia had the floor.

Speaking in Wentworth, England ahead of this weekend’s BMW PGA Championship, Garcia fired back at Woods with some words of his own.

So Sergio, what did you think of Tiger’s one-word answer?

Garcia then went off.

“First of all, I don’t have his number. And secondly, I did nothing wrong and don’t have anything to say to him. And he wouldn’t pick up the phone anyway. But that’s OK; I don’t need him as a friend. I don’t need him in my life to be happy and that’s fine. It’s as simple as that. Like I have always said, I try to be as truthful as possible,” said Garcia, according to Golf.com. “That’s why I think sometimes most of the people love me and some hate me. I understand that but I’m not going to change. That’s what makes me who I am and that’s what makes me happy. And that’s what makes the people I care about happy because they know they can trust me. Tiger doesn’t make a difference to my life. And I know that I don’t make a difference to his life.”

Garcia continued: “He called me a whiner. He’s probably right. But that’s also probably the first thing he’s told you guys that’s true in 15 years. I know what he’s like. You guys are finding out.”

The pair has a testy relationship that dates back to 1999 when Garcia gestured at Woods from the fairway of the PGA Championship in an effort to challenge him. They’ve had their run-ins ever since, including an incident at the Players Championship two weekends ago when Woods pulled a fairway wood out of his bag from the rough during Garcia’s backswing, which caused the crowd to cheer and Garcia to hit his shot right of his target.

“This is not just one thing; this has been going on for a long time,” Garcia said. “It’s happened in other tournaments. The problem is I’m one of the guys that just has to say something. A lot of people think about it, but don’t want to say anything. Tiger can and will beat me a lot of times in tournaments but he’s not going to step on top of me. I’m not afraid of him.”

We’ve now heard from both players in their very public spat. Maybe it’s time to hear from their caddies and coaches? Or, how about their girlfriends?

A showdown between Lindsey Vonn (Team Tiger) and Nicole Horrex (Team Sergio) seems like the next logical step.

Next Page: Ted Bishop On The Anchor Ban