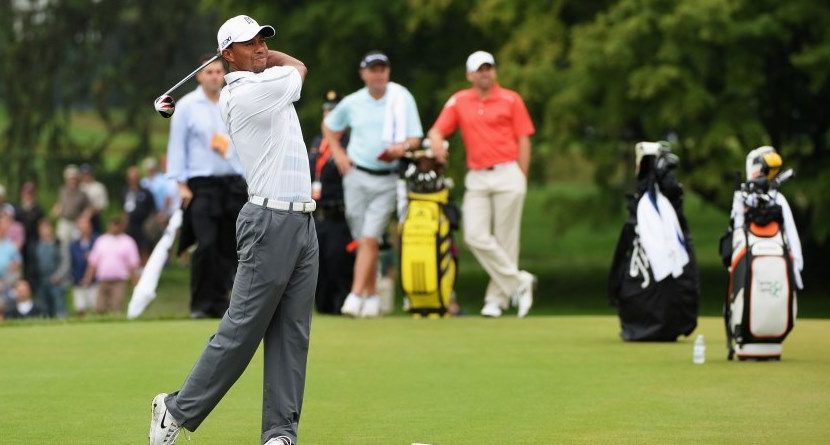 Tiger Woods and Sergio Garcia shook hands today. Fantastic! Does that mean the feud is over?

Photographic proof that the Tiger Woods-Sergio Garcia feud is finally over: usat.ly/1067CEe

Well, neither would speak to the media about it Monday. They’re saving that for a press conference Tuesday. We anticipate Sergio will not try to be funny.

But a simple handshake on the driving range at Merion for the U.S. Open can’t possibly mean all is well after decades of dislike. The gesture by Garcia is to be commended, for sure, but something called a conversation must take place between to the two to mend all their prior issues.

Sergio has said he would welcome the chance to chat with Tiger, but do you get the feeling Tiger has higher priorities? Especially this week? He’s been stuck on 14 majors for five years. He’ll play his first two rounds with the two golfers immediately trailing him in the world rankings. His ex-wife isn’t fond of his new girlfriend.

From Sergio’s perspective, though, the handshake and desire to apologize is necessary. His image is the one that needs repairing, especially when he could face some pretty rowdy fans this week. He’s already been assigned a police escort on the course.

“Yes, he could do, which is very sad for our game,” the Scot told the UK’s Guardian. “Remember we’re only a couple of hours from New York and it’s a lively crowd and I think he could well be booed.”

Well, we’re not sure Merion’s proximity to New York has much to do with anything. It would more so be that it sits just outside Philadelphia. Like we’ve mentioned before, Philly sports fans are a boisterous group.