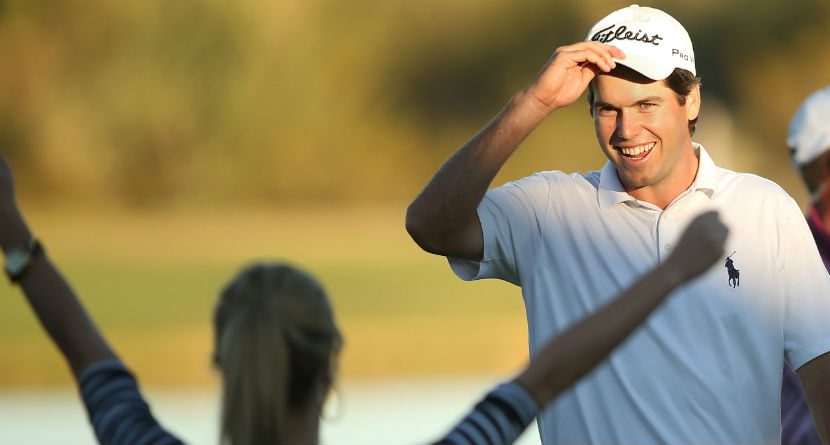 We’re now officially two weeks into the 2014-2015 PGA Tour season and we’ve already had our first amazing Sunday battle. Ben Martin outlasted Kevin Streelman and a host of other contenders — including U.S. Ryder Cup players Jimmy Walker and Webb Simpson — for the title at the Shriners Hospitals for Children Memorial at TPC Summerlin in Las Vegas.

Add in the Volvo World Match Play wrapping up across the pond and it was quite a weekend across professional golf. With it all now complete, here are 5 things we learned this weekend in golf:

Ben Martin is Clutch
Just after Kevin Streelman reeled off five birdies in six holes, Martin went ahead and eagled the 16th. Martin’s 46-footer for eagle on the par-5 16th gave him the outright lead, which he never relinquished. It was the decisive moment after Streelman made a run and looked to be in control — and the moment that undoubtedly won him the tournament.

Webb Simpson Is Ready To Make The Switch
According to PGATour.com’s Sean Martin, Simpson is getting a jump on the anchored putter ban, which goes into effect in 2016. Simpson told Martin over the weekend that he may begin using a short putter at next month’s Dunlop Phoenix Open in Japan and wouldn’t mind using it in 2015 if things go well during the trial.

Theater Doesn’t Care When The Season Begins
For whatever reason, some golf fans haven’t quite yet come to terms with the fact that another golf season has begun. But if we learned anything from this weekend’s events — in Las Vegas and in Europe — it’s that the golf season doesn’t wait until April to get interesting. There were lead changes, unbelievable play and match-play victories this week in golf. And think, it’s only October!

Brooks Koepka Is Getting More and More Comfortable
Last week, we mentioned that Koepka was ready for his close-up after some success in Europe the last few years. He put himself in the limelight again this week in Las Vegas with a T-4 after shooting a Saturday 64 that catapulted him towards the top of the leaderboard. Again, Koepka is a guy to look out for this year on tour and the last two weeks have proven that.

Victor Dubuisson Is No One-Hit Wonder
When it comes to match play, some players are hit or miss. The format is such a change from what they see week in and week out on tour that when it comes time to switch formats, the play suffers. That isn’t the case for Victor Dubuisson, however. He stormed into the spotlight last year at the WGC Match Play Championship in Arizona and showed again at the Ryder Cup how well he can fare with the format. And this past week, he made a deep run at the Volvo World Match Play Championship, proving that he’s ready for match play at any time.