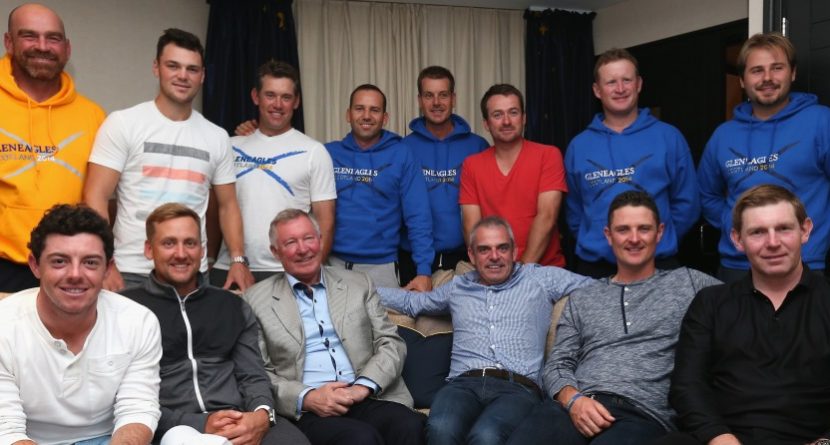 Soccer is the most popular sport in Europe and one of the most highly-regarded figures in that game is Sir Alex Ferguson, the recently retired manager of Manchester United.

Indeed, since Ferguson retired 15 months ago, the man chosen to succeed him, David Moyes, has already been sacked, and the latest incumbent, Louis Van Gaal, has spent £159 million bringing in new players, but has made an even worse start to the new season than Moyes did last year.

It has all added to the Ferguson legend.

“He is a guy who I played with at pro-am about 15 years ago and when I became captain I asked if he would do it,” McGinley said. “I always loved the way his teams played. The more I met him the more it seemed a natural fit.”

Ferguson, 72, follows in the footsteps of Bayern Munich coach Pep Guardiola, who addressed the team at Medinah in 2012, and Welsh rugby legend Gareth Edwards, who spoke at Celtic Manor in 2010.

Rory McIlroy is a well-known Manchester United fan and mentioned the club in his winner’s speech at this year’s Open Championship.

However, McGinley added: “Not everyone who will be in the room is a Manchester United fan so it should be interesting.”

McIlroy admitted after meeting Ferguson for the first time that he was in awe of the man, and could barely speak.

What a great first practice day @rydercup ending with a team talk from the man himself Sir Alex Ferguson. Going to bed a happy boy!

Here’s hoping that Europe gets off to a good start. Ferguson has a temper and hates losing. He once threw a teacup at David Beckham and when his players failed to reach his high standards, they were given what has come to be known as “the hairdryer treatment.” Suffice it to say that it involved a lot of very hot air emanating from the great man’s mouth! And a lot of cowering soccer players.