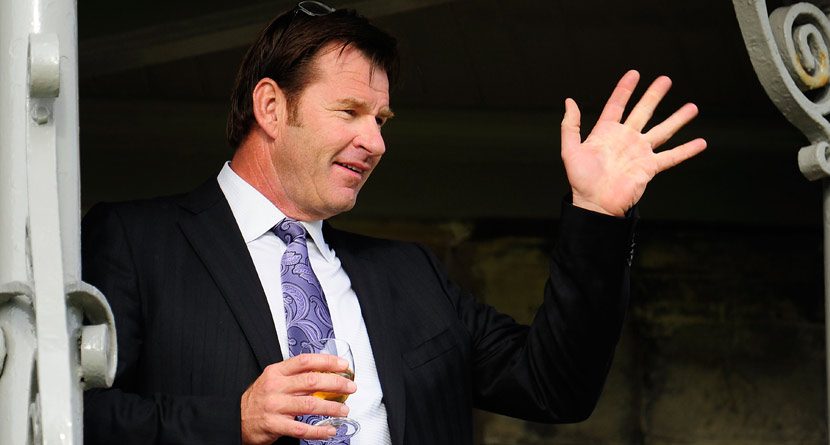 A diverse portfolio of business interests has the six-time major champion fully engaged these days. With his arms wrapped around television, award-winning course design, academies, equipment, apparel, instruction platforms and endorsements, Sir Nick has transitioned the career of a post-PGA Tour great into a modern day Renaissance man.

The seat he occupies next to Jim Nantz on CBS golf coverage is of course what he’s best known for. But like Greg Norman, Arnold Palmer, Gary Player, Jack Nicklaus and others the 55-year-old Englishman is using his elevated global status to reach new heights in the multi-billion dollar golf industry. Be assured: the Faldo brand is trending.

“Thanks to golf you have avenues outside the game when you leave the fairways,” Faldo explained during an interview at this year’s PGA Merchandise Show. “Granted I still get twinges, you know; I’d love to play like I used to play but those days are gone. As you get older you understand it. So really I’m enjoying all these opportunities. I want to build a business. I want to leave things for my kids and leave a bit of a legacy behind. It’s a good time for me. Fun really.”

Knighted by Queen Elizabeth II in 2009 Sir Nick’s plate to the uninitiated would seem rather full. Along with 50 design projects sprinkled over six continents and “rattling on about the game of golf” for CBS and Golf Channel, he continues to grow the Faldo Series, a premiere junior golf and education programme for boys and girls ages 12-21 he founded in 1996 for aspiring young golfers. Expansion into the United States is set for Phoenix, Arizona later this year.

Then there are his three most recent ventures. All unveiled in Orlando, the one commanding the lion’s share of attention at the PGA Merchandise Show is a unique new equipment partnership Faldo has forged with master craftsman David Edel.

As his TaylorMade-adidas deal expired, Faldo sought to move beyond another standard equipment endorsement deal for something more self-fulfilling. Aptly titled “Faldo by Edel,” the initial line features putters, limited edition irons and wedges.  With a reputation for tinkering going back to his days with Mizuno, Faldo finds it refreshing to go from endorsing a brand to being hands-on with one.

“I’m part of the Edel Golf company now so it’s not me just saying, ‘use this product or play that product,’” he says. “Of course this is a genuine passion. I’ve always fiddled with my clubs. In my own workshop at home I always put clubs together, gripped them, swing weighted them, weighed my grips; weighed my shafts. My clubs were as good as you could do 20 odd years ago.”

Having randomly gone through and been duly impressed by Edel’s custom putter fitting ,Faldo cold-called David Edel one morning less than a year ago to talk gear. They decided to meet for some fishing in Vail, Colorado to mull over ideas and potential business interests. It was time well spent. Agreeing to fly to Edel’s Liberty, Texas headquarters, Faldo arrived only to discover David Edel was much more than a club maker.

“He’s there messing about with old fishing reels, watches. I mean he’s a precision engineer,” Faldo says. “David’s one of these guys with a crazy passion for ideas. After our discussions we realized we had a lot of synergies going on with custom club fitting. I believe in it. People much prefer a tailor made suit from one off a rack, right?”

Claret & Green Collection is no less a passion. Inspired by his three Open Championships and trio of Masters victories, Faldo’s new apparel project harkens back to his days wearing Pringle on tour. From the start the intended goal was to combine classic elements of style and fit function with exceptional fabrication. Especially proud is Faldo of the Claret & Green logo.

“I designed that myself,” he says proudly. “The process started with the Royal College of Arms in Great Britain. Being Knighted I wanted to pass down a kind of family shield or coat of arms to my kids. Well, the entire shield represents everything about me. Stripes are in the order I won my majors; Claret and Green for the Opens and Masters; the shield represents I’m a Knight and Faldo is the brand name. Really what you see tells a story of my life, right. I’m proud of it. It took a year of fiddling but I quite like it.”

Elements of a story take a back seat to comprehensive instruction in Faldo’s recently re-released book “Swing for Life.” Reassembling the same crew who worked on the original version the book features 250 photographs (taken from 3,400 frames) and 15 embedded, downloadable videos adding a modern twist to classic Faldo instruction. Having learned from studying pictures of Ben Hogan and Jack Nicklaus, Faldo believes in this increasingly visual world the time was right for an updated version of Swing for Life.

“I wanted to do something to celebrate the 25th anniversary of winning my first Open,” he says. “’Swing for Life’ was very well received 15-16 odd years ago but technology has moved on so much so we put in a lot of time and effort to improve it for golfers. The embedded lessons are very cool.”

Intertwined with everything else going on Faldo Design continues its globetrotting ways creating new projects and renovating existing facilities around the world. Next month his latest design will open in Vietnam. There are also upcoming re-do’s at Doral Resort’s Red and Gold courses for new friend Donald Trump.

“I bullied a billionaire into that deal so I’m very proud of myself for that one,” smiles Faldo about his negotiation tactics to secure the work at Doral.

Mingling with well-wishers and posing for pictures with fans at the PGA Show Nick Faldo looks right at home as Chief Executive Officer of Faldo Enterprises.  Though one wonders when he has time to sleep Faldo himself admits the swirl of business activity around him is something he’s feeding off of.

“I’ve did my time with management and its taken me 10 years of having other people looking after me to realize I’d rather do all this myself,” he says. “People can see my passion. No manager can explain to a client, ‘oh, Nick’s really interested in this’. They’ve got to see and hear it from me. Whether it’s how I pick up a golf club or put my arms around a parcel of land it’s all genuine so if people see it they realize that’s me. That’s Nick Faldo.”