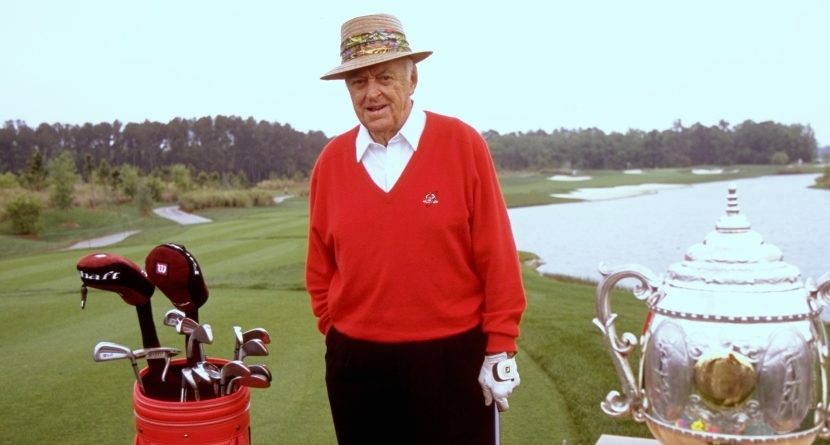 Tiger Woods may be quickly closing in on Sam Snead’s record of 82 PGA Tour victories – Woods owns 78 – but no golfer will ever be able to eclipse Slammin’ Sammy’s legacy. It lives on this week at the annual Sam Snead Festival.

The History
The Greenbrier resort in White Sulphur Springs, W.V., boasts the honor of hosting the event each year because it’s the club Snead called home for more than 60 years. He became the playing professional there in 1935, one year before he joined the PGA TOUR.

The 36-hole Pro-Am tournament was originally known simply as The Greenbrier Open, and first took place in 1948 to celebrate reopening after spending four years as an Army hospital during World War II. But it began to honor Snead nine years later because it likely wouldn’t have existed were it not for Snead, who returned home each year and brought some of the game’s best pros with him.

England’s Henry Cotton won that inaugural event, just a few months prior to claiming his third British Open. And the legendary Ben Hogan captured the crown the next year by besting Snead, a win that sent Hogan on a remarkable comeback from a near-fatal car accident in February 1949.

Snead finally collected his first Greenbrier Open title in 1951, then repeated in ’52 and three-peated in ’53. The latter tournament also featured comedian Bob Hope turning in the best round of his career (76). Two years later, Arnold Palmer didn’t win the tourney but did collect his first professional paycheck.

After it was coined the Sam Snead Festival in 1957, the honoree won more hardware in ’58, ’59 and ’61. Long after his professional playing days ended, Snead continued to faithfully compete at his event each year until his death in May 2002. 2013 Event Preview
Among the featured players for the 2013 event are four cast members from the show “Big Break Greenbrier.” James Lepp, Isaac “Sasquatch” Sanchez, Brian Cooper and Chan Song all competed at The Greenbrier in the summer of 2012.

The action tees off Wednesday with a practice round and welcome reception. Competition begins Thursday morning with a shotgun start on two championship golf courses: The Old White TPC course and The Greenbrier course. It’s another shotgun start on Friday, followed by an awards luncheon. Each team features a PGA or LPGA club or touring professional and four amateur players.

The first 18-hole course at The Greenbrier was the The Old White, which opened in 1914 and was awarded TPC status (becoming part of the PGA TOUR’s Tournament Player’s Club Network) in 2011. Par is 70 on the 7,287-yard course, which joined the PGA Tour schedule in 2010.

Charles Blair Macdonald designed the layout and took inspiration for many holes from famous European holes. According to The Greenbrier resort, “The Old White No. 8 hole was styled after the Redan at North Berwick; No. 13 after the Alps at Prestwick; and No. 15 after the Eden at St. Andrew’s.” The club also claims that U.S. President Woodrow Wilson was one of the first golfers to play The Old White course.

Next Page: Tiger On Making Up With Sergio – ‘No’