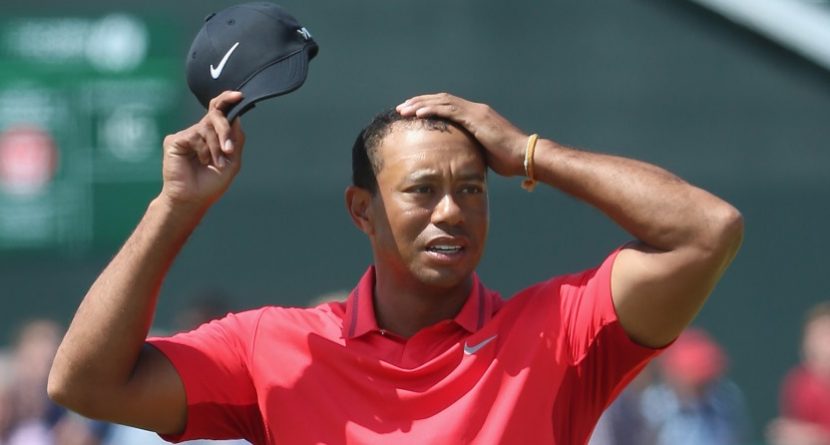 Tiger Woods recently sat down for a phenomenal interview with Colleen Dominguez and Fox Sports Live. Of course the major golf topics were covered.

Tiger on Rory McIlroy: “I think our comparison’s natural. It’s very similar in age to what Watson and Nicklaus was: Jack was older but, you know, not that much older. I’m only 13 years older than Rory. I’m still playing and competing. And I think that we’re going to be doing this for a long time together.”

Tiger on catching Jack Nicklaus (18 majors) and Sam Snead (82 PGA Tour wins): “Absolutely, I think that there are two goals that are probably pushing me right now. One is to get the all-time win record; I’m only three back of Sam on that one. And obviously the major record, I’m four back of Jack.”

But really, the greatest part of the interview is about Tiger’s hair – or lack thereof. Dominguez brings up his age and asks, “Are you comfortable aging?”

“I’m comfortable aging. My hairline’s not,” Tiger said. “I’ve got a nice skylight, and if I don’t wear a hat, you know, I can feel the heat unfortunately.”

Which brought up the inevitable question: Will you shave your head?

“I think I will, but I’m fighting the cause. I’m fighting it hard. It’s a no-win fight, but I’m just hanging in there,” Tiger said.

It’s the debate many middle-aged men face: to shave or not to shave. Some heads look just fine without a trace of hair; look at Tiger’s buddy, Michael Jordan. Others not so much.

How would Tiger look? We assembled a crack team of artists and forensic experts to extrapolate the possibility.  What do you think?