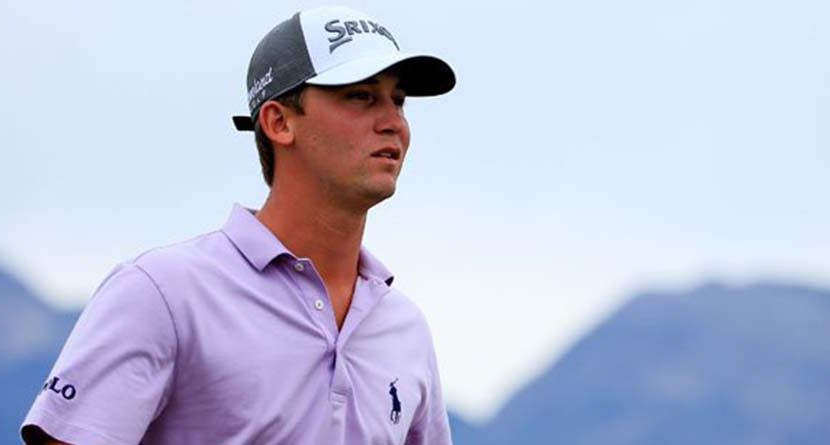 Smylie Kaufman isn’t the name of a 1920’s gangster, although the 23-year-old LSU product could have been charged with grand larceny and arson on Sunday for lighting TPC Summerlin on fire and stealing the Shriners Hospitals for Children Open thanks to a final-round, 10-under par 61.

Teeing off an hour and a half before the final pairing of Morgan Hoffmann and Brett Stegmaier, Kaufman went about his business playing the first seven holes 1-under before catching fire and playing the last 11 holes in 9-under par. To say he finished strong would be an understatement.

Shooting 61, taking the lead with a birdie at the 72nd hole? Welcome to the #PGATOUR, Smylie Kaufman. #QuickHits https://t.co/LEOF6FitQi

Wrapping his round up at approximately 2:45 p.m. local time, Kaufman would have 2:25 minutes of agonizing wait time while the likes Kevin Na, Cameron Tringale, Jason Bohn and Alex Cejka tried to add to their PGA Tour win totals. In the end, it was fellow rookie and Web.com grad Stegmaier who would have a putt from off the 18th green to force a playoff.

Kaufman had previously earned a grand total of $7,210 on the PGA Tour, but winning the Shriners netted him roughly 160-times that amount, $1,152,000. More importantly for Kaufman, the win garnered him a tee time at Augusta National for April’s Masters.

At 23, Kaufman is a year older than the likes of Jordan Spieth, Justin Thomas, Patrick Rodgers, Ollie Schniederjans and reigning PGA Tour Rookie of the Year Daniel Berger — the vaunted high school Class of 2011 — but with the exception of Spieth, Kaufman now has more PGA Tour wins than that esteemed group combined.

With his card secure for the next two years, a trip to Augusta marked on the calendar and more than a million dollars in earnings to his credit, Kaufman officially arrived on the PGA Tour just two events into his rookie season.

Not bad for an old guy from the Class of 2010 with a funny name.