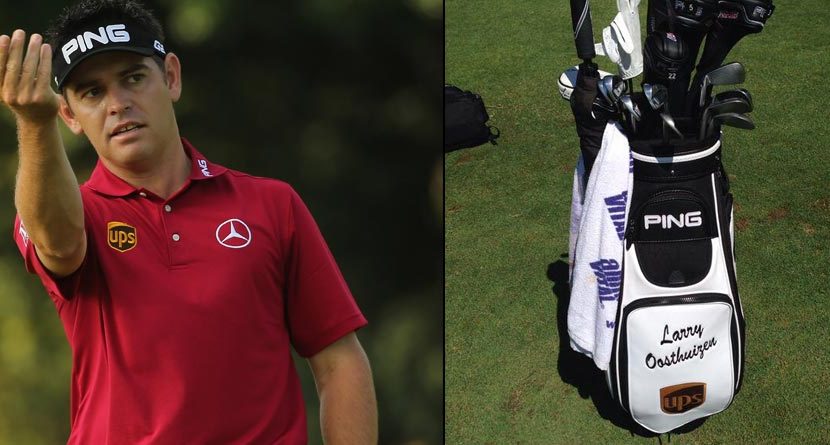 Louis Oosthuizen didn’t have the greatest time at the Players Championship last week. Sure, he missed the cut, but that was just the sad end to a week that started off kind of inauspiciously.

Oosthuizen (pronounced oost-hay-zen) isn’t the easiest name to spell. Certainly, the 2010 Open Champion knows that and expects some mistakes when it comes to his name … but not this mistake:

Pre-2010 Open Championship, this type of gaffe gets a pass. I mean, really, no one knew who he was. He had only won once before he hoisted the claret jug. But in the years since, Oosthuizen has claimed five more European Tour titles and, after his performance at the 2012 Masters (runner-up after a playoff with Bubba Watson), he’s pretty much become a household name for everyone who follows golf.

Well, everyone except the guy in charge of making the parking signs at TPC Sawgrass, I guess.

Of course, in the wake of this slightly embarrassing moment, Oosthuizen’s friend Charl Schwartzel was there to make sure he’ll never forget it.  He posted this to Twitter this morning:

Other Hot Links:
– Charles Barkley Talks Trash at Regions Tradition Pro-Am
– Coming Soon To a Course Near You: The Golf Bike
– Rickie Fowler Takes the Wheel at AMG Driving Academy
– The Fringe: Bubba Buys A Bunch of Burritos For His Buds
– Loudmouth Lets You Wear SpongeBob’s SquarePants