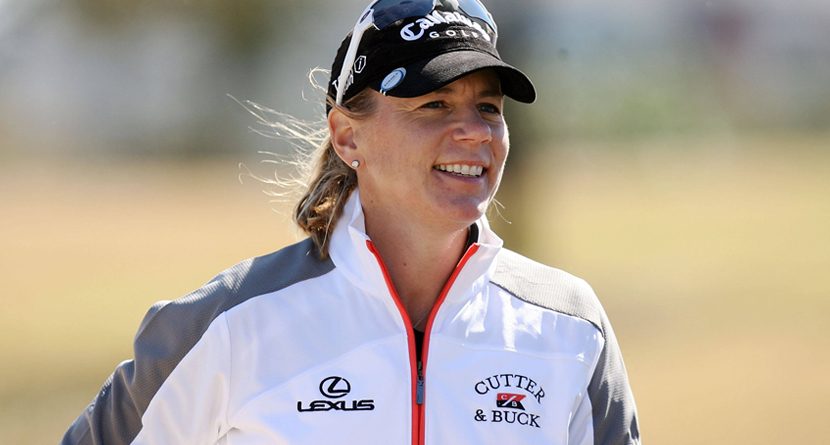 REUNION, Fla. – This is about the time some folks believed Annika Sorenstam might start to catch golf’s competitive bug again.

It was four years ago last month that the World Golf Hall of Famer played her final tournament round, capping her 71 at the Dubai Ladies Masters with a career-walkoff birdie. Sorenstam freely acknowledges that seems a lifetime ago.

And now? There doesn’t seem to be enough time in the day to simply keep the rust off her game.

“I want to maintain some of my game,” said the entrepreneur and mother of two, “but it’s really hard with the little ones and everything I do.”

There’s the golf academy that bears her name. The clothing line that has helped Cutter & Buck gain a solid foothold in the apparel market. The junior tournaments and health initiatives at the heart of her foundation. A weekly TV gig. And, yes, her young family.

“When you add it all up – yeah, it takes time,” said Sorenstam, whose Annika Invitational junior tournament celebrated its fifth edition this past weekend.

Her world still largely orbits around golf. She just doesn’t play all that much anymore.

“I feel like I’m up to date on everything,” she said. “It’s amazing – the game of golf, the doors it’s opened. You think of Golf Channel, [junior] tournaments, [course] design, clothing. It’s so many opportunities.”

It’s a transition that in many ways has been quite natural, while learning ways of adapting to a changing business climate – including an economic downturn just as she was getting ready to make the jump.

“I can’t think of a worse time to start a business,” she quipped.

Ambition and hard work, though, are qualities that work well in any economy. So is attention to detail. And Sorenstam didn’t leave those on the 18th green in Dubai.

“I come from being a perfectionist on the golf course,” she said. “I’m not just going to start a business and be average. I want the best academy, I want to design the best golf courses, I want to have the best wine [label] and I want my clothing to be the best selling.

“Now all of a sudden, you jump into a world that’s very different. In golf, I was the one in control of my swing, my decisions, everything. But in business it’s not that way.”

Having spent nearly three decades perfecting a highly individual game, Sorenstam now had to understand how to inspire and empower others.

“She’s a born leader, and she leads by example,” said husband Mike McGee, a former agent who now serves as the ANNIKA brand’s managing director.

“Everybody appreciates what she’s done on the course, so naturally they respect her. Then they see how hard she works in business and her overall way of looking at things – her way of planning and strategizing – and they respect that, too.”

Golf annals are sprinkled with those who have parlayed golf success into business enterprises. Harry Vardon and Bobby Jones were early cases; Ben Hogan’s equipment line was a staple in pro shops into the 1990s.

The business models these days belong to Arnold Palmer, Jack Nicklaus, Gary Player and Greg Norman. Sorenstam has gleaned tips from Palmer and Norman; she formed a partnership with Nicklaus that bid for rights to design a course for the 2016 Olympics in Rio de Janeiro.

Sorenstam also has made liberal use of a modern resource to sharpen her business acumen: CNBC.

“I certainly was a CNBC junkie,” said Sorenstam, who made mental notes as various CEOs were profiled by the cable network. She compared it to using Nancy Lopez as her role model as she set her sights on an LPGA career.

“I didn’t know her, but I watched what she was doing and I learned from her,” she said. “I would say I did the same thing in business. … I try to pick out the things that I admire and things that I think would fit me. So I guess I’m still learning from others.”

She also finds pleasure in passing along her knowledge to a younger generation. As part of the Annika Invitational – one of three she stages on three continents – Sorenstam gathers 70 or so junior golfers at her academy outside Orlando for a clinic and ask-me-anything Q&A. Another evening has seminars on topics from nutrition to media training.

“They’re so excited. They’re like sponges, wanting to learn,” she said. “If I can share some of my experiences or my mistakes, it’s fun to do that.”

When Sorenstam does play, it’s usually in association with the Annika Academy or in corporate outings. She’s lost 20 yards of distance since stepping away from competition, but doesn’t dwell on it.

It’s not as though daughter Ava, 3, and son Will, 22 months, can come out to hit balls on the range for an hour.

In December, Sorenstam accepted an invitation to a skins game in conjunction with the annual “Swinging Skirts” event in Taiwan. Though she played well enough to earn $39,000 for charity, it didn’t fuel any yearning for a comeback.

“The longer the time goes, the more remote it is,” she said. “I loved what I was doing, but I’m so glad I cut it off and moved on. There’s no way I could have done both [playing and business], that’s for sure.

“So I’d say yeah, it’s possible not to do it anymore.”