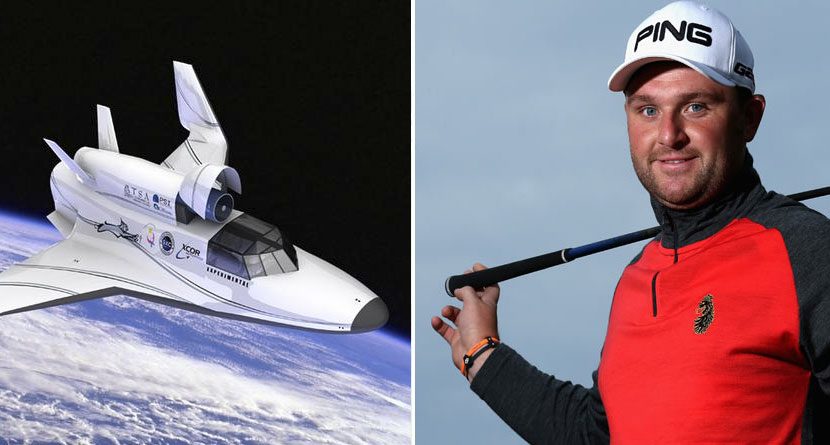 There are plenty of weeks on tour when the car or cash or bucket loader or whatever prize is up for grabs for an ace goes unclaimed. Awesomely, that wasn’t the case this week on the European Tour.

On September 5, we told you about arguably the single greatest hole-in-one prize ever — a trip to outer space — that was being offered at the par 3 15th hole at this week’s KLM Open at Kennemer Golf & Country Club in the Netherlands.

A life-size model of the Lynx Mark 1 — the craft that will be venturing into outer space — has been looming behind the tee box all week, reminding players to be aggressive with their tee shots.

Can you believe that?

Sullivan’s trip will come courtesy of XCOR Space Expeditions — “the most active space flight company in the world.” Sullivan will have to wait a little while to claim his prize, however, as civilian space travel isn’t expected to be available until the end of 2015.

Sullivan’s prize is worth around $100,000 and will require G-Force training and medical clearance before he can take off. Should he clear those hurdles, Sullivan’s flight will be aboard the Lynx Mark 1 and will last about a half an hour. Not jealous yet? Check out this video:

Honestly, I expected a bit bigger reaction out of him. Seriously? You just won a trip to outer space. Outer. Space. I think that warrants a wee bit more than a couple high-fives and a bro hug with your caddie. Flop down and make a snow angel? Run off the tee pretending you’re an airplane (or spaceship)? Do something, man! You just won a trip 39 miles above planet Earth. Show me you’re stoked, dude! I want to see you go bonkers!

Then again, maybe Sullivan isn’t that excited about it? Ironically and because the world can be a cruel, cruel place, it was just last week that Sullivan was treated for altitude sickness:

Tough day on the course today. Not great when a doctor is call out for you. But on to next week KLM http://t.co/NPLQPtEW8z

@andysulligolf was ill with altitude sickness last week, but he’s back climbing the leaderboard in Holland. @EuropeanTour

Yikes. It sounds like Sullivan will need to get used to heights.

Related Link: Out Of This World: Make An Ace, Fly To Space