Spieth, McIlroy Headline Heading Into The Weekend At Augusta 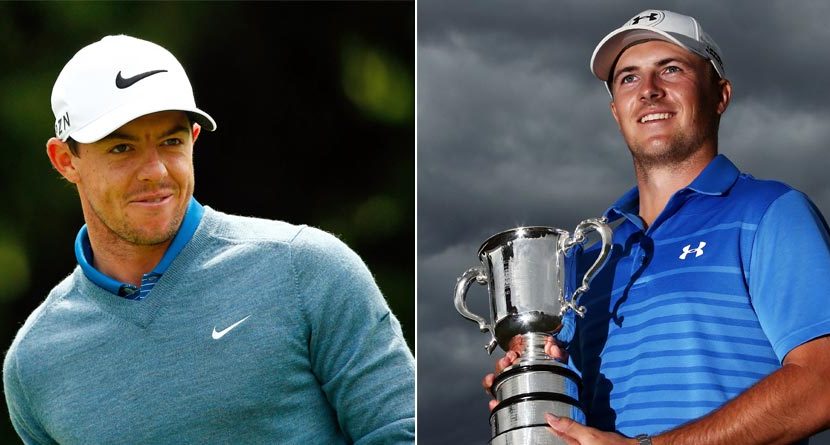 In difficult conditions, @JordanSpieth stood strong and held the lead at #themasters for a sixth consecutive round.https://t.co/Bf07uZqb84

The 2016 Masters was always going to be hard-pressed to live up to the hype wave that it rode into Augusta this week. However, a Saturday final pairing of world No. 2 Jordan Spieth and world No. 3 Rory McIlroy — not to mentioned big names like Jason Day, Dustin Johnson, Hideki Matsuyama, Sergio Garcia and Danny Willett all lurking — is living up to it.

Things didn’t look like they were going to be as cozy at the top of the leaderboard as they turned out to. Spieth, holding a two-stroke lead coming into Friday, saw it grow to four, then five after opening birdies at Nos. 1 and 2. At 8-under par and five shots clear, it looked as if the 2016 Masters was simply going to be a repeat of the 2015 renewal.

Watch leader @JordanSpieth‘s second round in under three minutes. #themastershttps://t.co/nvK3JHwrCT

An uncharacteristic four-putt (!) by Spieth on the par-4 sixth hole dropped him back to even for the day, 6-under for the week and back within striking distance of the mob hovering around 2- to 4-under par.

Stiff breezes and fast greens combined to wreak havoc on the field. Only four players managed to shoot under par rounds on Friday — Rory McIlroy, Dustin Johnson, Daniel Berger and Troy Merritt. That foursomes prize for such a stellar second round was that none of them are more than five shots back of Spieth.

The full leaderboard is available here.