Stacy Lewis: Battling to be the Best 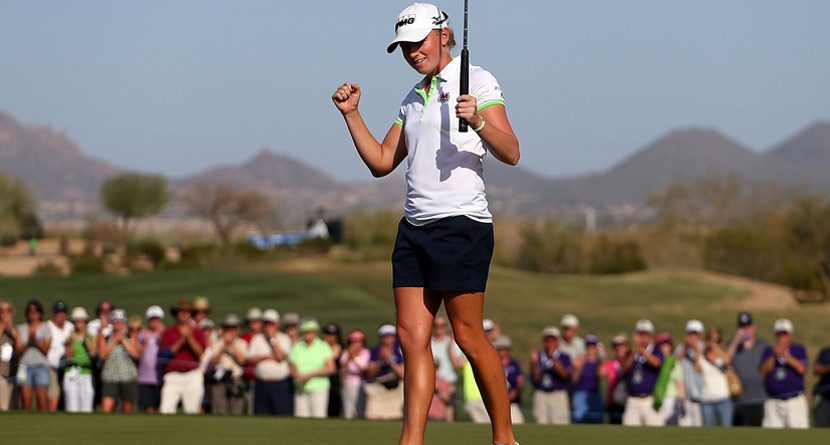 It’s been five years since Stacy Lewis posted her best finish in the U.S. Women’s Open.

Coincidentally, it was her first tournament as a professional.

The University of Arkansas product turned pro before the USWO at Interlachen in 2008 and, playing alongside Paula Creamer in the final pairing on Sunday, finished tied for third behind In-Bee Park.

In the intervening time between then and this week’s U.S. Women’s Open at Sebonack Golf Club in the Hamptons, a lot has happened.

Lewis got her major, winning the 2011 Kraft Nabisco Championship.

This past March, she became only the second American woman (after Cristie Kerr) to be the top-ranked player in the Rolex Rankings since their inception in 2006.

Then again, history has a way of repeating itself. It is, sort of, right now for Lewis. She’s now No. 2 in the world ranking, ceding the top spot in April to — you guessed it — In-Bee Park, who has won five times this season, including the first two majors of the year.

After some brutal U.S. Women’s Opens in the last several years, Lewis likes her chances at Sebonack.

“It feels like the last few U.S. Opens, it’s all been how straight you can drive the ball, and that is kind of who has won the tournament,” Lewis said Tuesday.

“So I like this year that you don’t have to drive it perfect off the tees, but you’ve got to play smart into the greens. You can take it off of ridges, you can go multiple ways to get the ball close, and I like that. I think it brings in another aspect of the game that the U.S. Opens haven’t tested in the past few years.” Growing up, Lewis battled scoliosis, a curvature problem in the spine that threatened her ability to walk. From the age of 11 for six-and-a-half years, Lewis wore a back brace 18 hours each day, hoping it would at least somewhat correct the spinal problem. It didn’t.

So in 2003, Lewis underwent a surgical procedure to try to fix the problem. She walked away with a stainless steel rod and five screws implanted in her back, and after nine months of recovery and rehabilitation, Lewis resumed her golfing life. She earned the spot that had been saved for her on the Razorback golf team and went on the win a dozen times in college before turning pro at Interlachen.

That process, that journey to take on a condition that could have debilitated her took a little over seven years. As she prepares for her seventh U.S. Women’s Open start, Lewis is ready to figure out what, in her words, is now her nemesis.