Stage Is Set For Sunday Singles At The Ryder Cup 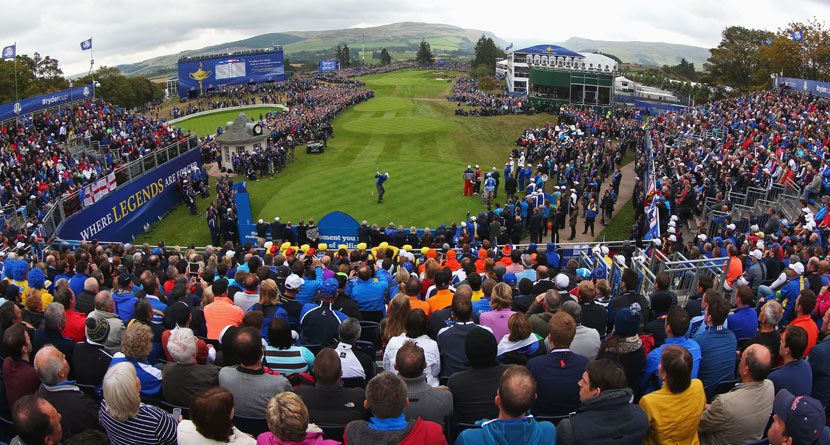 Before a shot had been struck on the final day, the second-guessing had already begun.

Parts of the British media were questioning Tom Watson’s captaincy and Stewart Cink said that American golf fans were now numb to defeat in the Ryder Cup.

It was put to him that maybe it was time for Europe to take on the rest of the world. Thankfully, he dismissed the suggestion. As did Mark James, a former European player and captain.

“Look, what you have to understand is that this is essentially two tours going head to head,” said James. “And let’s not start talking about changing the format. There is still huge interest around the world in the Ryder Cup. The fans love it, and the players love it. The fact of the matter is that, at the moment, Europe has a stronger team, but that will change.”

James also pointed out that Watson was without four of the best players in the U.S. in Tiger Woods, Dustin Johnson, Jason Dufner and Billy Horschel. You could also add Chris Kirk to the mix.

Sure, Watson has made a couple of mistakes – the selection of Webb Simpson never seemed to make much sense, and putting an out-of-sorts Keegan Bradley and Phil Mickelson together in the Friday afternoon foursomes was a particularly strange decision, given that he also sidelined Jordan Spieth and Patrick Reed, who had shined that morning.

Regardless of the outcome, nobody could possibly take issue with his decision to put his young guns out first in the singles. Spieth, Reed and Fowler led the Americans out. These guys carry no baggage. They are also fearless golfers, and if anybody could get the USA off to the flying start they required Sunday, it was these three.

The match of the day is Fowler against McIlroy. Remember that the 25-year-old American finished in the top five in all four majors this season. Yes, he lost out twice to McIlroy, but he doesn’t fear him. A couple of early birdies from Fowler would put a huge amount of pressure on McIlroy.

Make no mistake: if the Americans can get some red on the board in the early stages, the complexion of this contest will change enormously.