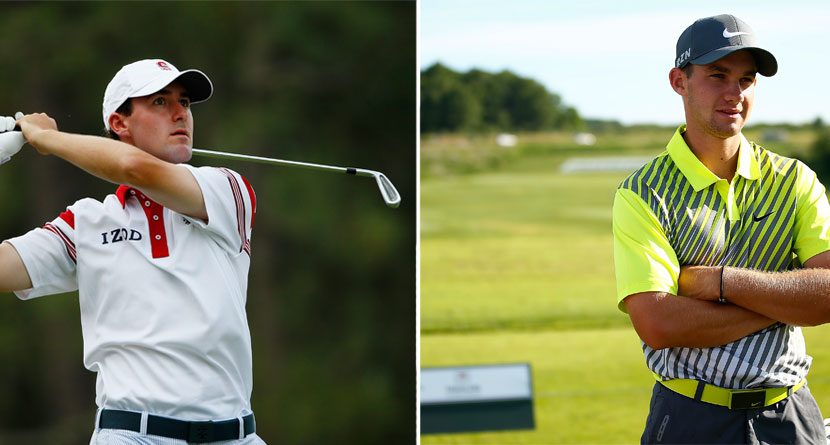 The Travelers Championship at TPC River Highlands has become the home of first-time winners on the PGA Tour lately, with the last four champions being just that: first-time champs.

A few young players making their PGA Tour debuts this week will be hoping to add to that list, making it five in a row: Cameron Wilson and Patrick Rodgers.

Wilson, the 2014 NCAA individual champion, will be making his debut in his home state of Connecticut this week, and he’ll be doing so on a new team: Callaway. Wilson will also be sponsored by IZOD, so he’ll have plenty of new gear as a professional.

We are proud to welcome @CAWilsonGolf to #TeamIZOD. Join us in wishing him good luck on the Tour! pic.twitter.com/WzUiv4skNv

His former teammate at Stanford, Rodgers, will also be playing for a new team, one that features Tiger Woods and Rory McIlroy. That’s right, he’ll be a part of the Nike team, as well as his hometown Indianapolis Colts. He’ll be sporting the Colts logo on his bag this week at the Travelers.

“Nike has always been behind the most elite players in every sport. To be joining the Nike stable is exciting because I know I am joining the best,” Rodgers said. “I was thrilled with the immediate impact the Nike equipment had on my game and I am excited for the future knowing I am aligning with the premier company in sport and golf.” Thrilled to begin my career partnered with @nikegolf and @colts. Couldn’t think of two better partners who share my passion for excellence

These young guns appear ready to take their game to another level as professionals, as they had plenty of success at the collegiate level. Rodgers tees off at 1:40 p.m. on Thursday, while Wilson starts at 2:00 p.m.

Other Hot Links:
– 5 Things You Need to Know: Travelers Championship
– 9 Players to Watch at the 2014 U.S. Women’s Open
– Trick Shot Tuesday: Masters of Misdirection
– Is FootGolf the Next Big Thing?
– Martin Kaymer Came Closer to Losing the Open Than You Think
– The Fringe: Kaymer Watches World Cup in NYC & Bubba Goes Fishin’