Stars In Bermuda for PGA Grand Slam of Golf 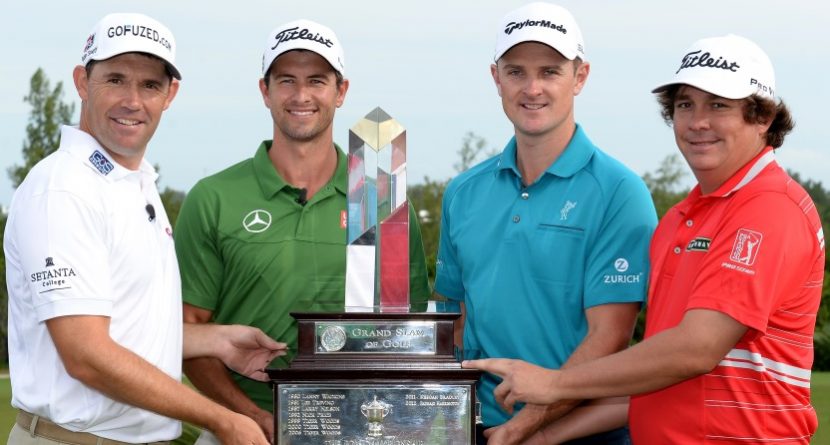 Odds are you won’t see many of the big names in golf on the PGA Tour until 2014 comes around. But that doesn’t mean they’re all in Bermuda on vacation.

Actually, four of the world’s best golfers are in Southampton, Bermuda, this week for the annual PGA Grand Slam of Golf. The made-for-TV event pits the year’s four major winners against each other in a two-day, 36-hole tournament at the Port Royal Golf Course.

This year’s major winners were, in order, Adam Scott (Masters), Justin Rose (U.S. Open), Phil Mickelson (Open Championship) and Jason Dufner (PGA Championship). Mickelson, however, declined his invitation to Bermuda, so his ticket was handed to Padraig Harrington, who won the specialty event in 2012.

For Scott, Rose and Dufner, this marks their first time in the Grand Slam of Golf, as each was a first-time major winner this year. Harrington got into the tournament last year as a replacement as well, taking Ernie Els’ spot after the Open Championship victor sprained an ankle.

The total purse for the event is $1.35 million, with $600,000 going to the winner. That’s significantly less than the champion’s winnings at a typical PGA Tour event, but it can be argued that the Grand Slam of Golf is the hardest tournament field to get into. It’s an honor to be there. And the last-place finisher walks with $200,000, so the players are guaranteed at least that much. Runner-up takes $300,000 and third place receives $250,000.

Rose and Harrington are the most rested, as the two Europeans haven’t played since the end of September. Scott and Dufner, meanwhile, last competed at the Presidents Cup — Scott for the International team and Dufner for the Americans, who won 18.5-15.5.

More sights and sounds from Bermuda: