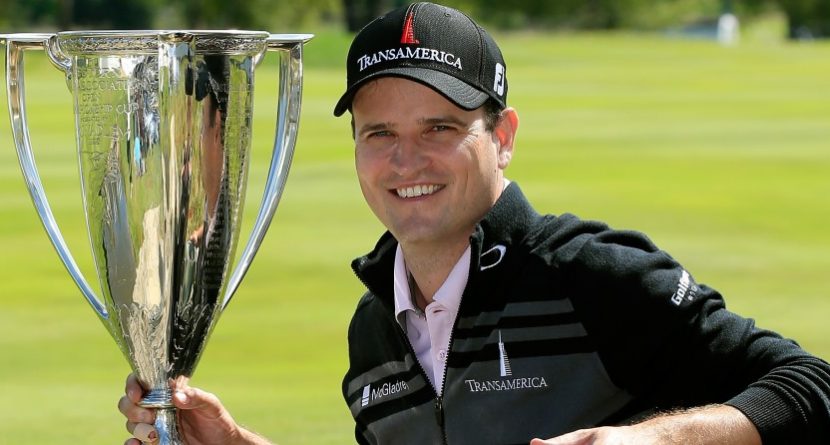 Zach Johnson has been a stud during each round of the FedExCup playoffs, even though he’s only participated in two of the three legs so far.

He missed the opening event, The Barclays, so he could stand up as the best man at his brother Gabe’s wedding. But he was back for the Deutsche Bank Championship, where he drilled a 25-foot putt on the very last hole to lock up the 10th and final automatic U.S. spot for the Presidents Cup. And on Monday (because play was suspended due to rain on Sunday), he turned in a bogey-free 6-under 65 to claim the BMW Championship at Conway Farms.

Naturally, he tops our list of studs this week, and was far from a dud.

STUDS
Zach Johnson: The win marks Johnson’s first since last year’s John Deere Classic in early July, and is No. 10 in his PGA Tour career. More significantly, though, the 2,500 points he gets for the victory shot him from 27th to fourth in the FedExCup standings. That means he now owns one of the coveted top-five spots which can collect the $10 million FedExCup next week by winning the Tour Championship in Atlanta.

Luke Donald: No one jumped more spots in those standings than Donald, however, and that shouldn’t come as a surprise. Donald calls Conway Farms his home course – he lives in the area after attending nearby Northwestern University – and was one of the few PGA pros who had played it prior to this week; Conway was making its PGA debut. After two steady rounds of 70, Donald went 4-under in the third round and 5-under Monday, getting him into a tie for fourth. That propelled him 25 spots up the FedEx standings, as he slid into the 29th slot. Only the top 30 play in the Tour Championship.

Nick Watney: Watney also needed a solid BMW performance to get into the Tour finale. Mission accomplished. He entered the final round 7-under, then went out and fired a 7-under 64 – the best score of the day – to end up as runner-up, two shots behind Johnson. His season-best performance bumped him up 22 spots in the standings, from 34th to 12th.

Jim Furyk: Anyone who cards a 59 gets “studly” mention for the week. But after that record score on Friday, Furyk shot a 69 on Saturday and a 71 on Monday. He lost his final round lead and finished three strokes back in third place. However, that moved him from 15th to 11th in the FedEx standings.

Hunter Mahan: Mahan made a bit of a move up the standings as well, from 18th to 15th, after tying for fourth. But the highlight of his weekend was the ace he scored on the downhill, 205-yard, par-3 17th hole on Saturday. That hole was the one on which BMW was offering to give away its new BMW i3 to anyone holing out their tee shot. Enjoy the new ride, Hunter.

STUD & DUD
Matt Jones: Behind Donald, Johnson and Watney, Matt Jones was next biggest mover on the FedExCup standings board, rising 19 spots after going 10-under and tying for eighth. But his jump was from 51st to 32nd, two spots shy of getting into the Tour Championship. He needed his 8-foot birdie putt on the last hole to drop. It lipped out.

DUDS
Lee Westwood: The big Englishman began the week right at No. 30. He ended it at No. 41. Westwood didn’t leave himself much of a chance after an opening-round 80; he finished 12-over in 67th place. Only two guys slid further down than he did.

Scott Piercy: One of those free fallers was Piercy, who dropped 14 slots from 35th to 49th. He opened with a 10-over 81 and never found his way under par, ending up +18 and tied for last place.

Harris English: All English needed this week was to not lose ground. But he went 3-over-par on Friday, then lost his tee shot at No. 8 on Sunday while rain poured down. Moments later, play was stopped. When he returned to No. 8 on Monday, English took a drop and could only manage double bogey. Whatever chance he had of staying inside the top 30 when he arrived at 18 was washed away with a second bogey on the back nine.

Dustin Johnson: Maybe because he likes living on the edge – he is engaged to Paulina Gretzky – Johnson flubbed his way around Conway early on, going 7-over on Thursday and Friday. He got things under control to an extent over the weekend, but still couldn’t break par. He tied for 62nd at +9, dropping him seven places in the FedEx standings. However, he entered the week 23rd, so he’s going to the Tour Championship as the last man in.

Rory McIlroy: The man who began the year at No. 1 in the world rankings will not play the Tour Championship. McIlroy began the week 41st in the standings, so jumping 11 spots was doable. Not after shooting 13-over in the first two rounds, though. Nonetheless, he ended on a high note, scoring 68 on both Saturday and Sunday (he was one of six players to finish 18 on Sunday), the first time all season he posted consecutive sub-70 rounds. And it sure took a lot out of him: