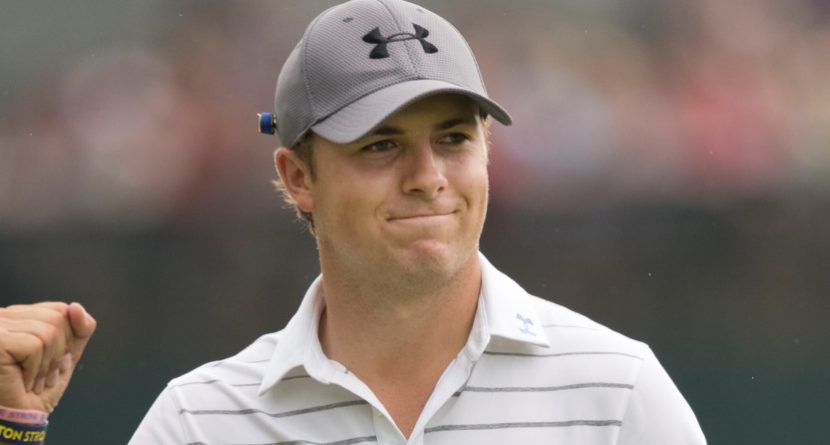 Playoff golf is just like playoff football, basketball or any other sport: Some players flourish, some players falter. There were a handful of both such guys over the Labor Day weekend at the Deutsche Bank Championship, the second leg of the FedExCup playoffs.

The most obvious stud was Henrik Stenson, the Swede who finally picked up a win this year, and in doing so, jumped past Tiger Woods into the No. 1 spot in the Cup standings. But he wasn’t the only one making a big move up or down.

The 46-year-old who dramatically scaled back his schedule this season – he’s played just 11 official PGA events – picked up his third runner-up result of the year. He was two shots behind Stenson, but that earned him 1,500 FedExCup points, vaulting Stricker from 28th to eight in the Cup standings. The performance also secured him a spot on the U.S.’s President’s Cup squad.

The 20-year-old who began the year with no PGA Tour status now sits at No. 10 in the FedExCup. He fired a 9-under-par 62 on Monday, closing his round with three birdies and an eagle at 18, finishing in an overall tie for fourth. Spieth is playing so well right now that he may get one of the captain’s picks for the President Cup.

On the surface, Johnson’s weekend looked pretty so-so: He tied for 27th and dropped from 25th to 27th in the Cup standings. But his birdie – courtesy of a 25-foot putt – on the very last hole locked him into the 10th and final automatic spot for the President’s Cup. He entered the Deutsche Bank at No. 10, but was passed by Stricker. Johnson’s birdie bumped out Webb Simpson, with whom Johnson played the final round Monday.

Making the biggest jump of anyone over the weekend was the oldest son of Craig Stadler, the 1982 Masters champ. Kevin sandwiched rounds of 64 around a 71, and finished up with a 68 to finish in a tie for fourth, just his third top-10 result of the year. He jumped from 75th to 32nd in the Cup standings.

Sneaking into the 70th and final spot for the playoffs’ third leg, the BMW Championship, was The Big Easy. He made birdie on the second and fourth holes Monday, and parred everything else. That was good enough for the last berth by a fraction of a point over Ryan Palmer.

STUDS as well as DUDS

The spunky Spaniard led after 54 holes, primed for his first win since last year’s Wyndham Championship. But while everyone else on the leaderboard around him was staying low, Garcia carded five bogeys en route to a 2-over 73. Still, his T-4 finish jumped him 31 spots in the Cup standings, from 55th to 24th.

Also making a huge move up the standings was Poulter, who climbed from 77th to 52nd with his 15-under T-9 finish. But he double-bogeyed the 18th hole, the easiest one on the course throughout the tournament. Had he just made par on that last hole, Poulter could’ve collected 200 more FedExCup points and been ranked closer to 32nd in the Cup standings.

The tournament favorite was a decent 7-under after two rounds, but he played 3-over the next two. The T-65 finish matches the worst of his season, but he’s still No. 2 in the Cup standings. And his daughter is cute.

He got everyone fired up with that first-round 63, but he inspired few with 71s the rest of the way. His T-41 dropped him three spots to No. 6 in the FedExCup standings.

Last week we were talking about Scott as a strong Player of the Year candidate. He’s still the top contender to Woods, especially because his poor play (T-53) at the Deutsche Bank was better than Woods’ poor play, but we had higher hopes for last week’s winner at The Barclays.

He began the week sitting at No. 60 in the Cup standings, then bogeyed three of his first four holes at the Deutsche Bank. Palmer was under par from there but couldn’t make the cut. That kept him from earning any FedExCup points, and thus dropped him 11 spots to that unforgiving No. 71 spot.

The South Korean had three bogeys through the first three rounds, then matched that total in his final round. The last one hurt the most. It came on 18 – the easiest on the course – and dropped him from 70th and in the BMW Championship to 73rd and done for the PGA season.

Other Hot Links:
– Newsworthy9: Hitting the Links
– Deutsche Bank Championship: Chipping In To Help
– “Fowlering” Catches on Like Wildfire