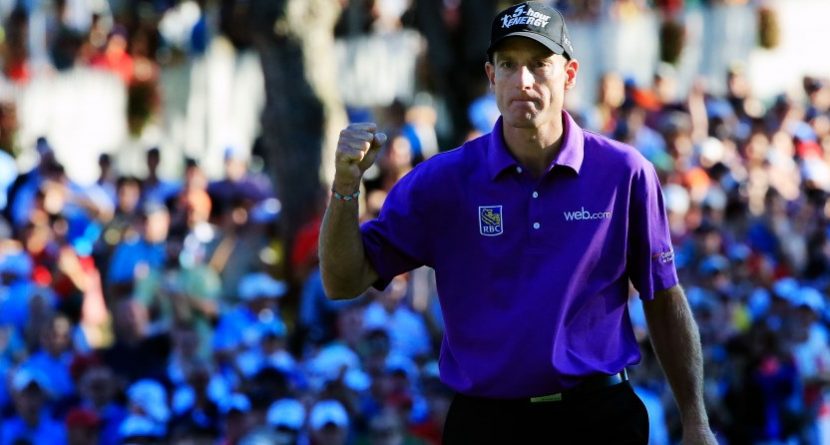 Following the shot-making clinic Jason Dufner put on to collect the 2013 PGA Championship at Oak Hill on Sunday, the majors season is now closed. World No. 1 Tiger Woods failed to win a 15th such title, and Rory McIlroy, who began the year ranked No. 1, didn’t come close to capturing a third.

We saw three guys – Adam Scott at the Masters, Justin Rose at the U.S. Open, and Dufner – earn the first major titles of their career, and witnessed Phil Mickelson grab his fifth overall, but first at the Open Championship.

So who’s the very early favorite to claim the first major of 2014, the Masters? The odds obviously say Woods. But so many things can happen between now and April 10, 2014, it’s foolish to speculate.

So let’s just look back at who closed out the 2013 major season on a high note, and those who did not.

STUDS
Jim Furyk
Raise your hand if you thought the 43-year-old Furyk would play in the final group on Sunday at a major in 2013? Fluff (a.k.a. Mike Cowan), put your hand down. As the caddie, you’re always expected to think your guy’s going to win. Furyk had a great chance to capture a second major at last year’s U.S. Open, but he fluffed the drive on 16 and couldn’t recover. He then began Sunday in the lead, but couldn’t match Dufner’s three birdies on the front nine, so he collected his third runner-up at a major. Regardless, Furyk’s still fighting to add to that 2003 U.S. Open title.

Rory McIlroy
The world No. 3 did not enjoy a good year at the majors, but what many forget is that he was awful in 2012’s first three majors as well. People don’t remember all that because he won the fourth, the PGA Championship. McIlroy couldn’t quite do the same this year, but he did record his first top-10 finish at a major, as his 3-under 277 tied him for eighth. It’s something positive to build on, especially considering he sat at 5-over at one point on Friday.

DUDS
Tiger Woods
When he snatched back the world No. 1 ranking in March, it almost seemed guaranteed that he’d finally snap his majors drought. But all the big ones have played out and Woods still hasn’t won one since his 14th at the 2008 U.S. Open. He placed in the top six at the 2013 Masters (T-4) and Open Championship (T-6), but he finished outside the top 30 at the U.S. Open (T-32) and PGA Championship (T-40).

Phil Mickelson
Lefty couldn’t have been more confident as he arrived at Oak Hill. He won his first Open Championship three weeks earlier, and spoke about how great it would be to battle Woods while the two were (seemingly) at the top of their games. But Mickelson couldn’t get under 71 all week, and his 78 on Saturday matched his worst score ever in a PGA Championship.

Lee Westwood
The man frustratingly sitting atop the Best Player Without A Major list continues to be Lee Westwood. He’s 40 but his top-3 finishes at majors are only getting more frequent; he owns eight, the most of any golfer without a win since 1934. But the absence of a major win is only growing larger. His 3-over T-33 finish at the PGA Championship was the worst of his majors season.

Other Hot Links:
– No Butts About It, Jason Dufner Has His Hands Full
– Vonn Never More Popular… Thanks to Tiger
– Flashback: Jason Dufner Appears In Bizarre Photo, Starts Internet Craze