Studs & Duds From the 2014 Players Championship 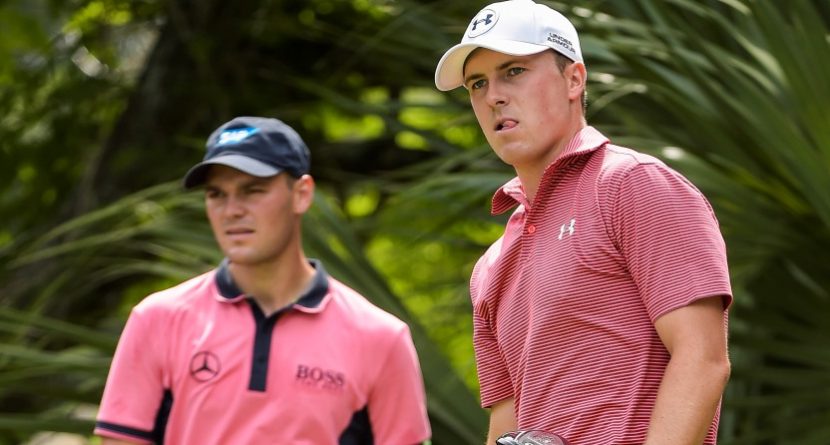 Martin Kaymer held a share of the lead going into Sunday at the Players Championship, and stretched it four strokes at one point. But after a 90-minute rain delay, he came out and carded a double-bogey on 15. Lead was down to one.

A par at 16 sent him to TPC Sawgrass’ daunting 17th hole, where Kaymer’s tee shot landed on the island green but spun back and nearly rolled into the water. Then a nervous chip left him with a 30-foot par putt to maintain the lead. Incredibly, he nailed it:

Definitely a studly move. When the 29-year-old German made par on 18, he collected the largest check in golf history ($1.8 million) and his first victory on the PGA Tour since he claimed the 2011 WGC-HSBC Champions. His 13-under 275 (1-under 71 on Sunday) makes him the just the third player to win a major (he took the 2010 PGA Championship), a World Golf Championship and the Players Championship; Tiger Woods, Phil Mickelson and Adam Scott are others.

So it goes without saying that Kaymer tops the list of studs from the Players Championships. But here are five others who stepped up this week, and five who didn’t.

Jordan Spieth – The man with whom Kaymer was tied entering the final round was Spieth, and this would have been a huge victory for the 20-year-old. There was, of course, the huge winner’s check, but he also would’ve been the youngest Players Championship winner ever. Five bogeys on Nos. 5-15 on Sunday – after making zero bogeys the first three days – did Spieth in, and he finished tied for fourth at 10-under after a 2-over-74 round. But in the past month, the kid’s played in the final Sunday group at the Masters and the Players. Pretty impressive.

Rory McIlroy – He’s not exactly thrilled with another “back door top-10,” but four such finishes in his past four starts isn’t too shabby. McIlroy is a combined 18-under on Sundays in his past four appearances, so he’s got that going for him if he can just get himself into contention on, say, Thursday or Friday. He closed with a 6-under 66 Sunday to tie for sixth at 9-under overall, and he made this awesome gesture to a little girl:

Justin Rose – The reigning U.S. Open champ made some noise on his front nine Sunday with three birdies, then promptly fell out of contention with three straight bogies to start the back nine. Rose could’ve kept unraveling, but instead he carded birds on three of the last four holes to finish T-4 at 10-under. That’s his best finish of the year and something to build off as the focus of the golf world shifts to this year’s U.S. Open.

Steve Stricker – Does this dude not make the game look so easy? At 47, by choice he’s spending more time with his family than he is at the golf course. Yet when he decides to show up on the PGA Tour, which has only been five times this season, he never really contends for the title but also never really flirts with the cut line. Stricker left TPC Sawgrass with $187,500 for a T-13 finish, and we probably won’t see him again until the U.S. Open.

DUDS
Adam Scott – All he needed to do was finish in the top 16 to take over the No. 1 ranking in the world from Tiger Woods. So Scott carded a 5-over 77 on Thursday, barely made the cut and finished T-38. Maybe he gets some slack because this was his first tourney as a married man, but only a little.

Patrick Reed – Maybe a little slack can be cut for Reed too, as his mind might be elsewhere while his wife could give birth to their first child at any moment. But this is the man who wants to be considered among the top five in the world. He shot 9-over before being cut on Friday, and really only played well from January to March, when he collected two wins. Since the infamous “top five” quote: three missed cuts and no finish better than T-48.

Phil Mickelson – Sooner or later Mickelson will pick it up, right? Well, he’s got a month to figure something out if he wants to complete the career grand slam this year by finally winning the U.S. Open. Mickelson was 1-over through two rounds at the Players Championship, which led to his third missed cut of the season, in which he has zero top-10 finishes in 12 appearances.

Harris English – The 24-year-old has a win and six total top-10 results this season. That’s got him seventh in the FedExCup standings, and, prior to the Players, 10th in the Ryder Cup standings. But is this a guy U.S. captain Tom Watson wants battling Europe’s best this fall? In the big events, English wilts. He’s missed two cuts this season: the Masters and the Players.

Bubba Watson – The Masters champ confessed prior to the Players Championship about TPC Sawgrass not seeing eye to eye with him. And we get that; not every course can suit a player’s style. But he’s been the best golfer in the world this season, and he showed he’s capable of going low on the track, posting a 3-under 69 on Thursday. Yet, Watson finished with a 4-over 76 on Sunday, ultimately tying for 48th, his worst result of the year.