Studs & Duds from The Barclays 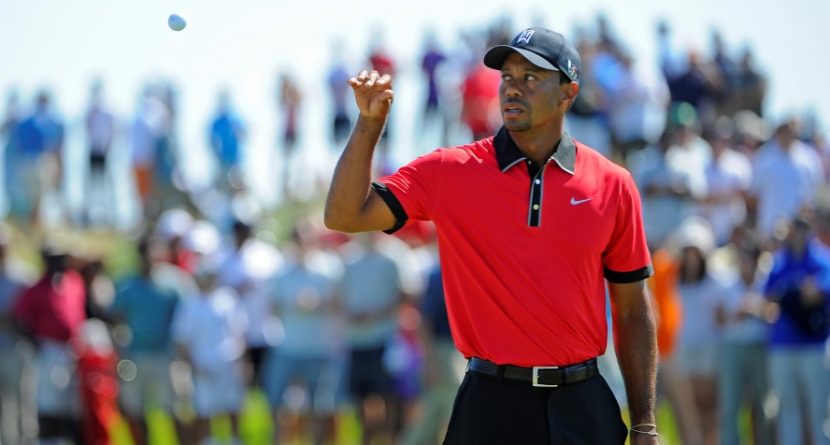 The Barclays – round one of the FedExCup playoffs – wasn’t a major, but at times it felt like one: There was $1.44 million awaiting the winner (the same amount for Masters and U.S. Open victors), some players succumbed to the pressure down the stretch, and Adam Scott played like a stud.

Logically, he tops our list of studs from the weekend. And as with any tournament, there were a handful of duds as well.

STUDS
Adam Scott: Despite carding a 5-under-par 66, which would be one stroke off the best round on Sunday, Scott didn’t think his 11-under 273 was enough to capture his first FedExCup playoffs event. But buoyed by a bogey-less final 24 holes, Scott was about the only one who didn’t wilt under the Sunday pressure. Maybe it’s because, at six shots back to start the day, he teed off so early. Or maybe it’s because he thrives in the big-time tournaments. He won the Masters this year and in the past 12 majors, Scott’s placed among top eight seven times.

Tiger Woods: The world No. 1 tweaked his sore back at No. 13 during Sunday’s final round, but he still came up with birdies on 16 and 17 to give himself a chance for victory No. 6 on the year. Unfortunately, his birdie putt at 18, which would have handed him a share of the lead, halted an inch short. Still, Woods stayed in the 60s for an entire tournament for the first time this PGA Tour season, giving every indication that 2013 Player of the Year honors will come down to the wire between him and Scott.

Graham DeLaet: The Canadian with zero career PGA wins collected the largest payday of his career ($528,000) Sunday with his first career runner-up finish. He ran off four birdies on his final nine holes, carded a final-round 65 (tied with Phil Mickelson for the day’s best), and leaped from 34th to seventh in the FedExCup points standings. Should he finish the year in the top 30, and thus play in the Tour Championship, he’ll get a spot in his first Masters and U.S. Open.

K.J. Choi & Greg Chalmers:  At the par-3 14th on Saturday, K.J. Choi dropped strokes for the first time all day with a hole-in-one, using his pitching wedge to 135 yards. It marked his second ace on the PGA Tour, the first of which came back in 2001. Yet, his feat was matched in the very next group, when Greg Chalmers walked up to the 14th tee with his pitching wedge and holed his second ace of the year, the only Tour player with more than one this season.

Kevin Chappell: Speaking of stealing the spotlight, Chappell fired a 9-under 62 on Saturday to break the course record at Liberty National. It came exactly one day after Keegan Bradley set the record with a 63 on Friday.

DUDS
Geoff Ogilvy: Besides winning, the goal in the FedExCup playoffs is to make it to the next event. The top 125 players compete in the The Barclays, after which the field is whittled to 100 for the second event, the Deutsche Bank Championship. Ogilvy would’ve cracked the top 100 had he sank a 2.5-foot par putt on his final hole. Instead, he dropped to 104.

Aaron Baddeley: The story was similar for Baddeley, who finished 101st. He unfortunately bogeyed 16, 17 and 18 on Sunday, the back-breaker coming from a missed 5-foot par putt on his 72nd hole. That moved Camilo Villegas in the coveted No. 100 slot.

Matt Kuchar: One of just five players entering Sunday with more than one PGA victory this season, Kuchar held a share of the lead and looked set to join only Tiger Woods with more than two. He then bogeyed his first hole, double-bogeyed the ninth, and couldn’t get anything going on the back nine. Kuchar free fell all the way to 19th place thanks to a 7-over 78.

Dustin Johnson: Among the surprising cuts at the Barclays was Dustin Johnson, the new fiancé of Paulina Gretzky. Doesn’t a happy-in-life golfer equal a good golfer? Well, yes if you’re Tiger Woods; no if you’re Rory McIlroy. Johnson is No. 22 in the FedExCup standings, but cuts at the next two playoff events could keep him from the Tour championship.

Ian Poulter: Maybe he was Baba Booey-ed so much he couldn’t concentrate? Poulter, the most vocal critic of the shouts that people yell out after players hit, opened the Barclays with a 6-over 77. He followed up with a 3-under 68, but that didn’t help him make the cut. He’s now 77th in the FedExCup standings, so he’ll play this week in Boston, but he needs to jump inside the top 70 to continue after that.

Other Hot Links:
– Dustin and Paulina: An Instagram Love Story
– Fan Voting Can Be A Huge Hit In Golf
– Twitterati – Best Social Pics