Studs & Duds from The Presidents Cup 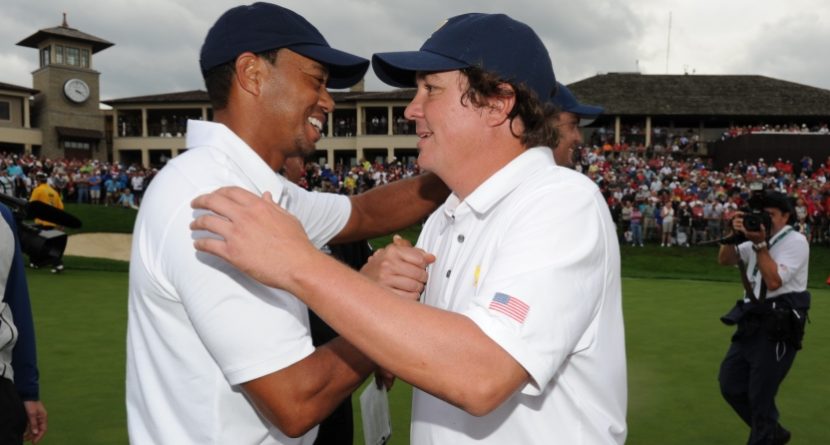 The Presidents Cup was a close contest, and then it wasn’t, then it was again, and in the end, it wasn’t. A team of U.S. all-stars has beaten a squad made up of the best golfers from every other continent (not including Europe) five straight times now, and eight of the 10 times the Presidents Cup has been played.

Yet, this year’s event at Muirfiled Village wasn’t total domination. There were studs and duds on both sides:

STUDS
Tiger Woods: His singles match clinched the win after the U.S. sat on 17 points for nearly an hour, watching the Internationals claim three matches in a row and make things interesting. But despite a back that was once again bothersome, Woods defeated Richard Sterne 1-up and concluded the week 4-1 in his matches, the best mark of anyone.

Jason Dufner: Paired with Zach Johnson for the team sessions, the Duff Daddy also lost only once all week (in four of the five sessions; he and Johnson sat out the Saturday fourball matches). The Presidents Cup rookie took down Brendon de Jonge, 4 and 3, in his singles match, and is married to the woman who might take the best Instagram photos ever.

Zach Johnson: Also 3-1 on the week, Johnson took his Sunday singles match 4 and 2 over Branden Grace, giving the U.S. 17 points and at least a tie for the Cup. He and Dufner are the only Americans who won their singles matches at both the Presidents Cup and 2012 Ryder Cup. Shots like this really help a man’s score:

Jason Day: He may reside from Australia and compete for the International team, but he’s a member at Muirfield Village. His knowledge of the course showed, going 3-1-1 on the week. Day won every match not against Phil Mickelson and Keegan Bradley, and turned in the biggest singles romp when he ousted Brandt Snedeker 6 and 4 on Sunday.

Graham DeLaet: Day’s partner for the pairs matches also fared well with a similar 3-1-1 showing in his Presidents Cup debut. DeLaet made a few remarkable shots over the weekend, including this one on the final hole of his singles tilt with Jordan Spieth to win it:

DUDS
Mother Nature: She wreaked havoc all week, delaying matches with rain Thursday, Friday and Saturday. And though she didn’t halt any play on Sunday, she forced the closing ceremony indoors. The total rainfall for the week was 1.97 inches.

Richard Sterne: Of all the 24 players competing, only Sterne and Hideki Matsuyama hadn’t played Muirfield as part of the PGA Tour’s Memorial Tournament. His lack of course knowledge showed, going 0-4 in his Cup debut. Why he was matched up against the No. 1 player in the world – who has won the Memorial on this course five times – during Sunday singles, we don’t know. But his defeat to Woods gave the Cup to the U.S.

Branden Grace: Also 0-4 for the week was Grace, another South African rookie in this event. Grace and Sterne lost their first two matches together, then paired with others to both drop each of those Saturday matches 4 and 3. Grace fell 4 and 2 to Johnson on Sunday.

Brandt Snedeker: Just because we’re nitpicking here, Snedeker was the only American to come out of the week with a losing record (2-3). He was kind of crushed on Sunday by Day (6 and 4), but at least he left his first Presidents Cup on the team with that actual cup.