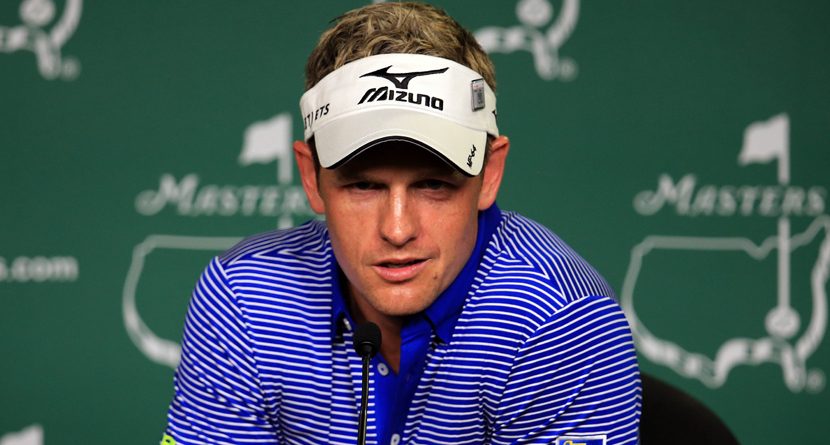 For golf fans, Masters week is like Christmas, the Fourth of July and March Madness all rolled into one. So while we wait until Thursday morning to unwrap all the presents waiting for us under the Eisenhower Tree, here’s a breakdown of some of this week’s marquee groups.

Group Most Likely In Need Of A Strong Start: Rory McIlroy, Keegan Bradley and Freddie Jacobson McIlroy and Bradley are young, major championship-winning golfers who have developed somewhat of a chummy relationship while living around the greater Jupiter, Fla. area. Both players have also received a good bit of criticism recently, McIlroy for his switch to Nike and Bradley because of the anchored putter, and it stands to reason that their nerves will be pumping as they take the course Thursday afternoon. A comfortable pairing can go a long way towards determining an individual’s success, so expect Bradley and McIlroy to keep each other grounded in the face of adversity. And if that doesn’t work, they can always look over at Jacobson and marvel at his untucked shirt.

Don’t be surprised if by Amen Corner Grandpa Crenshaw has both Manassero and Guan sitting on his lap while regaling them with stories from his first Masters championship in 1984, when both teenagers were nothing more than a twinkle in their parents’ eyes. Guan, 14, is the youngest player in the field, while the 19-year-old Manassero wasn’t even 2 when Crenshaw won his second green jacket in 1995. If their round runs late, the 61-year-old Crenshaw may have to rush his playing partners back to the hotel so they don’t miss curfew.

Mize and Henley are both Georgia natives and probably hold a deep appreciation for the natural spring beauty of the Peach State. Henley was going to be one of my sleeper picks but has cooled off a bit after winning the Sony Open earlier this season. Mize, the 1987 Masters champion and an Augusta native, continues to ride his lifetime exemption all the way to two made cuts since 2001. Bottom line, Mize is here while Greg Norman is out prepping the Chinese national golf team for the 2016 Rio Olympics.

Group Most Likely To Be In The Lead Heading Into Saturday: Fred Couples, Dustin Johnson and Branden Grace

“Boom Boom” (Couples) always stirs some good feelings heading into Augusta, and the South African Grace was my preseason pick to win this years British Open Championship. DJ is a wild card because he has the distance to challenge the par 5s but has never faired well when holding a lead in a major championship. What a story it would be if Couples once again manages to sneak his way into one of the final groups on Sunday. How would his old college roommate Jim Nantz temper his excitement?

Two of the feistiest, most authentic players on the PGA Tour, Ian Poulter and Bubba Watson, are set to reignite their very spirited Ryder Cup rivalry. With Bubba’s length off the tee he might not need any help walking on water over the very reachable par-5 15th, but for the shorter-hitting Poulter a motorized flotation device may come in handy. The Englishman was my preseason pick to win this year’s Masters based on his play at Medinah during the Ryder Cup, and he has really given no reason to switch allegiances. However…

Tiger’s performance so far in 2013 would lead you to believe that he is ready to recommence his pursuit of Jack Nicklaus’ record of 18 majors. Recently, the world’s No. 1 golfer said that his goal has always been to win 20 majors. As dominant as Tiger’s been at Augusta, it is truly amazing when you realize that he hasn’t slipped on a green jacket since his playoff victory over Chris DiMarco in 2005.

Until he wins that next major, the questions and skepticism will continue to surface surrounding the state of his game. Will he continue his streak of hot putting since the Steve Stricker tip at Doral? Can he shape his driver to fit the predominately dogleg left fairways of Augusta? Will he be able to hold off a suddenly rejuvenated McIlroy and an omnipresent Phil Mickelson?

So far this season Woods has had all the answers and for the first time since his Turkey Day trauma in 2009, your money is once again safer with Tiger over the field.

Do you think you know who will win the 2013 Masters? Then you could win a Caribbean vacation. Play in the Back9Network Masters Challenge powered by Golfradar!