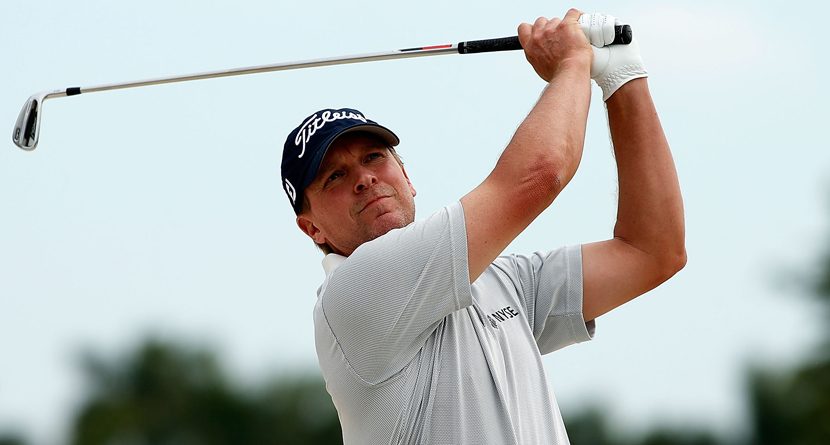 The Shell Houston Open is the final tuneup before the Masters for many of the world’s top golfers. At the conclusion of this tournament, pros like Rory McIlroy, Keegan Bradley and Lee Westwood will return to the safety of their homes, where they will strut before a mirror in search of the perfect set of accessories to match up with the ever-desirable and elusive green jacket.

McIlroy sent Tiger Woods a congratulatory text message after Tiger won last weekend’s Arnold Palmer Championship, a victory that allowed Woods to supplant Rory as the world’s No. 1 golfer. The always-appreciative Woods apparently responded by telling his new BFF to get his “finger out of his a**” and win this week. McIlroy would be wise to respect Tiger’s candor and honesty, but might want to remind his Jupiter neighbor about censoring future text messages. We all remember how that went the last time Woods’ texts went public.

One more thing about this latest interaction between the two best golfers in the world: Do you think Arnold Palmer and Jack Nicklaus ever used to talk to one another like this? It’s hard to imagine Arnie telling Jack to do anything with his body other than make sure to take a big step over the bunker rake.

Group Most Likely To Finish On The First Page Of The Leaderboard: Steve Stricker, Bill Haas And Brandt Snedeker

The only things certain in life are death, taxes and Steve Stricker finishing in the top 5 this weekend. If Stricker’s exceptional play continues, expect more and more golfers to limit their playing schedules like the 46-year-old decided to do this year. Too bad the Wisconsin native wasn’t available for the men’s basketball team last Friday in St. Louis, as the Badgers could have really used some better touch around perimeter in their second-round loss to Mississippi.

Group Most Excited To Be Playing In Next Year’s Tavistock Cup: Phil Mickelson, Hunter Mahan And Geoff Ogilvy

If Mickelson is truly fed up with California’s tax rates, then Florida seems like the ideal landing spot for his family — which could result in the veteran deciding play in next year’s Tavistock Cup as a member of either Lake Nona or Isleworth. Perhaps if Rickie Fowler has his way, Phil will join Oak Tree National. Although I’m not sure how much Amy Mickelson would enjoy summers in Edmond, Okla.

With a win this week, 2012 Masters runner-up Louis Oosthuizen could generate the sort of momentum necessary to forget all about Bubba Watson’s miraculous hook shot from the pine straw. If the South African falters, then Westwood is overdue for his first solid performance on American soil since he moved his family to the states this winter.