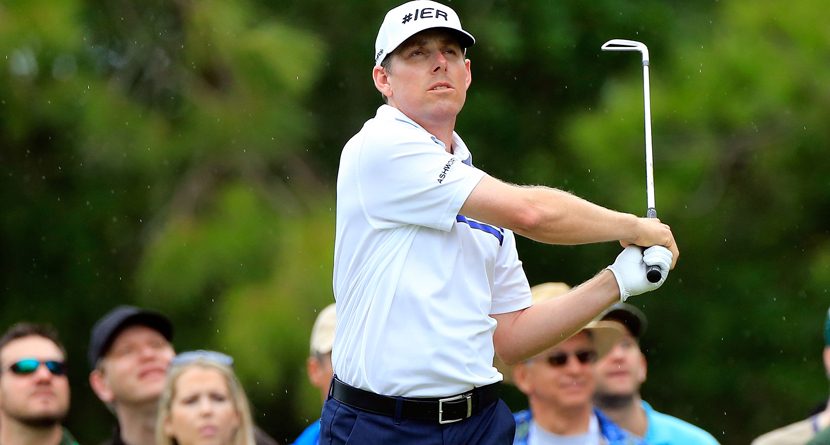 While most golf fans cast their glances forward to next week’s Masters, play on the PGA Tour continues in San Antonio at the Valero Texas Open. With golfers like Rory McIlroy recently joining the field, the competition is sure to heat up in the heart of Texas a few days before the action kicks off in Augusta.

With five championships between them, these three golfers know their way around the Alamo. Too bad Curtis is no longer sponsored by the NFL because I would always enjoy when he — and the late Payne Stewart before him — would wear shirts emblazoned with the logo of the local professional football team. Since San Antonio doesn’t have an NFL team, I wonder who Curtis would have represented this year.

The Dallas Cowboys used to play a preseason game in the Alamo Dome and the Texans aren’t too far away in Houston. Or maybe he’d go with Minnesota, as the Vikings have been rumored for relocation ever since the Metrodome collapsed.

Group Most Likely Gearing Up For A Green Jacket: Ian Poulter, Jim Furyk And Charl Schwartzel

Poulter was my preseason pick to win the Masters and so far in 2013, he hasn’t provided anything that would force me to hedge my bet. Schwartzel conquered Augusta in 2011 and Furyk is still capable of grinding out red figures in major championships. If Poulter does win, the question is what kind of food would he serve at the champions dinner? Perhaps some of this curry dish that he so proudly displayed on Twitter? If this were the case, Augusta better line Magnolia Lane with a few more porta potties.

Group Most Likely In Need Of A Role Model: Jordan Spieth, Rory McIlroy And Matt Kuchar

The 19-year-old Spieth recently earned a temporary PGA Tour membership, while Rory McIlroy — formerly the world’s No. 1 player — is searching for some last-minute momentum before the first major of the season. The always-steady Kuchar could provide some nice veteran leadership for the two youngsters, especially considering that he and his wife Sybi form a championship-caliber mixed doubles tennis pairing. Meanwhile, McIlroy continues to date professional tennis player Caroline Wozniacki.

They may not be household names, yet all three of these golfers have already won on tour this season — which is more than can be said for marquee players like Keegan Bradley, Bubba Watson and Webb Simpson. If this trend of off-the-radar American golfers winning PGA Tour events continues, then Ryder Cup captain Tom Watson could have some tough choices when it comes to rounding out his team for Gleneagles.

Speaking of random American golfers, the streak continues this week as the U.S. earns a clean sweep of PGA Tour events heading into Augusta. Take that, China!