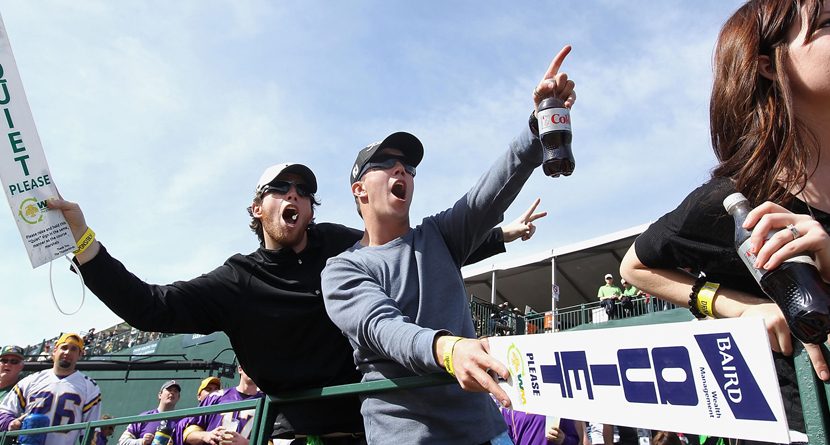 If the Minnesota Vikings do ever make it back to the Super Bowl, then what happens to those purple people-eaters who lord over the 16th tee box like it is some sort of Nordic funeral pyre? Do they abandon their post in an effort to be there for their favorite football team as they play for the first NFL championship or stay in Phoenix and remain members of the loudest arena in golf? We can verify this later but I’d be very surprised to see many Colin Kaepernick or Ray Lewis jerseys hanging around the Waste Management Open this week.

Now on to this week’s Superlatives. Speaking of Ray Lewis, the big news from Tuesday’s media day was the Ravens veteran middle linebacker’s refusal to acknowledge or respond to the report in S.I. which linked him to a Florida-based company called S.W.A.T.S. (Sports with Alternatives to Steroids) that, among other things, produces a deer-antler spray described as “a natural, anabolic hormone that stimulates muscle growth” and includes something called IGF-1,which is on the NFL’s banned-substance list. After Lewis tore his triceps muscle on Oct. 14, he reportedly contacted S.W.A.T.S and was recorded asking for “everything you got, because I got to get back on this this week.” If the NFL eventually validates this evidence then Ray Lewis has many more problems on his hands than trying to keep up with Colin Kaepernick.

According to SI, Vijay Singh is also linked to S.W.A.T.S., which apparently explains why the soon to be 50-year-old is still yoking drives 300 yards down the fairway. As late as November, Vijay paid $9,000 for deer-antler spray which has prompted a PGA Tour investigation and an admission of guilt from Singh. (But he didn’t know it had a banned substance!) Maybe these revelations will bring about harsher testing standards on tour or maybe golfers will continue to be allowed to stay one step ahead like most other professional athletes. And one other thing, who knew that deer of New Zealand were such potent creatures? Wait till these guys get their hands on some reindeer-mist. That stuff will make you fly!

Group Most Likely To Bust Out An A Cappella Version Of “O Canada”: Mike Weir, Stephen Ames and Tim Clark By the end of the week Ames and Weir may have to make Clark an unofficial Canuck. Speaking of our neighbors to the north, I’m happy to have the NHL back in my life if only because it offers one more reason to watch this clip. Plus, as a loyal Back9 contributor I must toe the company line and plead with Commissioner Bettman to help return the Whale back to Hartford. It’s been way too long since central Connecticut has failed to support a professional sports franchise.

Group Most Likely To Go A Little Overboard On The Purell: Bubba Watson, Nick Watney, and Russell Henley Don’t be surprised if both Watney and Henley show up to the first tee wearing those white surgical masks that were so popular back during the swine flu outbreak. Bubba might still be contagious after pulling out of both the Hyundai Tournament of Champions and the Farmers Insurance Open due to illness. Which reminds me, I hope they sanitize the flagsticks this week. All those golfers and caddies hands could lead to the next global pandemic.

Group Most Likely To Give the Gallery At The 16th Hole A Whole Bunch Of Free Sh*t: Rickie Fowler, Phil Mickelson, and Jason Dufner Phoenix loves themselves some Puma as Rickie readies himself to toss stacks of flat-brimmed Puma hats, while the raucous, irreverent crowd at the stadium hole awaits their free swag. If Dufner wants to try and top the increasingly popular Fowler, then the Auburn grad should consider releasing a real live war eagle from his golf bag. That oughta get the fans attention.

Group Most Likely To Break Out the Spectacles: Padraig Harrington, Hunter Mahan, and Brandt Snedeker Paddy Harrington is always looking for an edge. From sports psychologists to astrologists the Dubliner is willing to do whatever it takes to return to his major championship winning form. This now apparently includes wearing eyeglasses even though he has 20/20 vision and doesn’t technically need them except for when the dry desert air kicks up into his contact lenses. He believes they may help him read the greens a bit better, which is fine except if he’s going to wear glasses he might as well go for it and borrow a pair from Tom Kite. Those Coke bottles will never go out of style. Stanley is the defending champ and Kaymer is poised to experience a rebirth after a career saving putt and performance at the 2012 Ryder Cup. Hopefully this time around he’ll avoid wearing angler-designed patterned neckwear he fashioned last time he contended in the Arizona desert back at the 2011 WGC – Accenture Match Play.