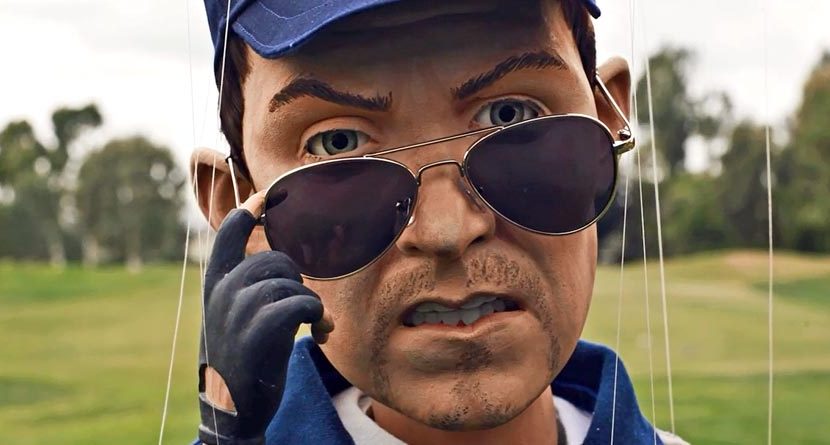 To help with the rollout of its new JetSpeed metal woods and drivers, TaylorMade golf has unveiled a new ad campaign featuring the Speed Police: a group of four puppets made in the likeness of Sergio Garcia, Justin Rose, Dustin Johnson and Jason Day. Remember the movie “Child’s Play”? That gave me night terrors. Now Puppet Justin Rose will haunt my dreams for the next few months. Thanks a lot.

The first installment of the Speed Police has already aired on television and depicted a mini “police car” speeding through a golf course. You may recall the commercial featuring Paulina Gretzky who was hanging out near a teebox at the course. You know, typical everyday stuff.

The next commercial in the series is scheduled to air during the first round of this week’s WGC – Accenture Match Play event. Following that spot, a series of follow-up ads will be aired throughout the season.

So what do Sergio, Jason, Justin and Dustin look like in puppet-form? I’m so happy you asked! Here’s Officer Dustin Johnson, a hard-hitting tough guy from the U.S. of A. who swings first and asks questions later.

Next we have Officer Jason Day, a passionate Aussie who’s in touch with nature. Because he’s some kind of puppet hippie.

Officer Justin Rose is a quick-witted, level-headed Brit who goes by the book and is a champion of charm.

Finally, Officer Sergio Garcia is a soft-spoken tour veteran who hails from Spain.

And let’s not forget the teaser video that launched the new series starting Paulina Gretzky: