Ted Talks: One Shot At A Time — With The King 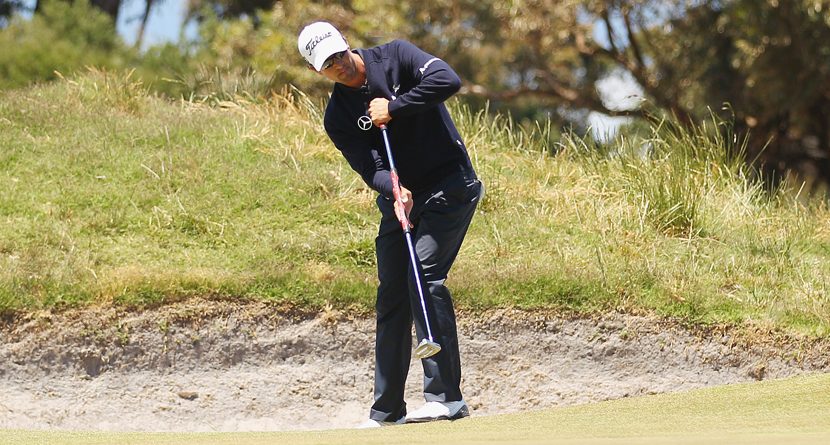 Last week, I sat eye to eye with Arnold Palmer in his office at Bay Hill Club and Lodge. If The King and I have one thing in common — perhaps there is only one thing — it would be our offices.

Both are cluttered and loaded with memorabilia that reflects golf, friends and family. But for me, it was a special moment in time and it was the equivalent of talking baseball with Babe Ruth. The point of my visit was to bring Palmer up to speed on the PGA of America’s position on the proposed ban of anchoring by the USGA and R&A.

Palmer has been an outspoken advocate of the USGA in this fight, and my mission was not to change his mind. He told me that his main concern is that he fears a ban on anchoring could cause bifurcation of the Rules of Golf. He feels that two different sets of rules would be a major setback to the sport.

Palmer hates to hear the PGA Tour and the PGA of America talk about another set of rules that would allow anchoring. Palmer is also steadfast in his belief that players who anchor a long putter are not performing a stroke as it was intended when the game was founded.

Once an advocate of a non-conforming driver for the recreational player, Palmer is now in a different place than he was back in 2001 when Callaway and the USGA went toe to toe on the issue. With all due respect, I had to ask him, “What’s different today? Why the change of heart?” The 83-year-old smiled with that legendary twinkle in his eye and shrugged his shoulders.

“That’s just the way I feel,” he replied.

Nobody in golf wants a head-on collision caused by some silly controversy over a long putter. Palmer will even go as far to call the long putter a contraption, not recognizing it as a golf club. I disagree with that, and I also think that anchoring a long putter is a stroke as defined by the Rules of Golf.

According to page 33 in the Rules of Golf, “A ‘stroke’ is the forward movement of the club with the intention of striking at and moving the ball, but if a player checks his downswing voluntarily before the clubhead reaches the ball he has not made a stroke.” No one can convince me that an anchored putting stroke is anything but a ‘stroke.’

Call this Bishop’s Last Stand if you will. I am going to offer a simple solution to this whole mess. Listen up, Mike Davis, because this idea was not mine. It was Glen Nager’s, the current USGA President. Glen and I spent a couple of days together in late February at Augusta National Golf Club. We stayed together. I knocked his glasses off as we got out of a van for dinner. But we teamed up the following day and won our friendly competition among the USGA, the PGA and our great hosts at The Masters.

You heard it here first. Nager and Bishop bonded (at least I thought we did). I have been intrigued by a concept that Nager presented to me on our flight from Atlanta to Augusta. Nager is a guy who has taken 13 cases to the Supreme Court of the United States. I respect him greatly and I want to take his idea to another level.

If the USGA would drop the proposed Rule 14-1b and, instead, make the ban on anchoring a Condition of Competition in the rule book, all entities in golf could handle it the way they want. Rule 33-1 says, “The Committee must establish conditions under which a competition is to be played.”

Currently, there are (11) Conditions of Competition in the Rules of Golf. These conditions include matters which are not appropriate to deal with in the rules of the game. They include such matters as Specification of Clubs and the Ball; Caddies; Pace of Play and Suspension of Play; and Practice, Advice and Anti-Doping. These Conditions of Competition are options available to any entity that is conducting an event.

By creating a 12th Condition of Competition dealing with anchoring, the USGA and R&A could ban the stroke from their competitions. The Masters and PGA Championship would have to decide how to handle it. The PGA Tour could allow anchoring in all of its events, including those on the Champions Tour. The PGA of America professionals who run events nationwide could let the recreational amateurs continue to anchor the long putter.
To Palmer’s point, the world of golf would continue to exist under one set of rules. What about the confusion of having major championships “look” different because players are anchoring a long putter in some, but not in others? That’s not unprecedented in golf history.

Prior to 1975 and subsequent to 1921, players used any sized ball to their liking in the British Open, provided its diameter was not smaller than 1.62 inches. The “small ball” or “English” ball was widely used across the pond because it went farther and was more workable in the wind.

Over the years, a desire grew to standardize the rules on golf ball size. In 1974, the R&A outlawed the small ball in British Open Championships, but it wasn’t until 1990 that the R&A adopted the USGA’s 1.68-inch minimum diameter rule, relegating the small ball to history. But for decades, players actually had the option to play two different sizes of golf balls in a major championship.

Is a 12th Condition of Competition a perfect solution? Keegan Bradley, Webb Simpson, Tim Clark, Adam Scott and Carl Petterson will say no. They would get to anchor their long putters in all but maybe three events each year — the U.S. Open, the British Open and maybe The Masters. They could still compete in these majors with another putter. It would allow them to play the PGA Tour every week just like they do now. Recreational amateurs would be able to continue and enjoy the game using their anchored strokes.

The 12th Condition of Competition could be golf’s great compromise. Every stakeholder in the game gets what they want. Arnold Palmer keeps one set of Rules. Doesn’t all of this sound way too simple?