Ted Talks: One Shot at a Time 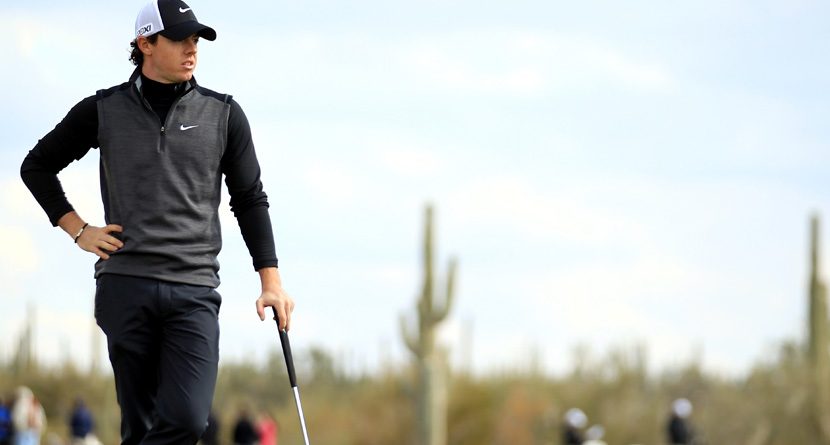 Let me start by saying that I have two daughters and if both were in the dating scene, I would totally approve of Rory McIlroy as a potential suitor.

The young Irishman turns 24 years old in May, and it would appear that he has life in his cross hairs as he sits atop the No. 1 spot in the Official World Golf Ranking.

SportsPro has rated McIlroy as the second most-marketable athlete in the world, while the Golf Club Managers’ Association ranked him as the second most powerful person in British golf. Unfortunately, for any single woman out there who yearns for McIlroy, he has been dating Danish tennis star Caroline Wozniacki since 2011.

Last year at the age of 23, McIlroy already had two record-setting major championship win under his belt. He won the 2011 U.S. Open by eight shots and the 2012 PGA Championship by the largest margin in the history of the event. He was the leading money winner on the PGA Tour last season with over $8 million in earnings. In addition, McIlroy won over 5.5 million pounds on the European Tour. Rory has set a pretty high bar for kids his age.

On March 11, as PGA President, it will be my privilege to present McIlroy with the Vardon Trophy which he earned by having the low stroke average on the PGA Tour in 2012. Later, on June 3, we will play together at the PGA Championship Media Day at Oak Hill CC in Rochester, N.Y. As defending PGA champion, McIlroy will host our Champions Dinner during Championship week in August.

Golf can be a fickle game and no one, not even McIlroy, is exempt from the cruel treatment that the sport can dish up. So far this season, McIlroy has played in three events. He missed the cut in two and got beat in the first round of the WGC-Accenture Match Play in Tuscon. Things came to a screeching halt for him last Friday at the Honda Classic where he walked off the eighth hole when he was seven over par.

McIlroy was asked three times by reporters if a physical problem had forced his early exit. Each time he responded, “No, I’m not in a good place mentally.”

Then the story changed to a sore wisdom tooth, before a picture was released of him munching a sandwich moments before he headed for the parking lot. The night before, McIlroy had tweeted pictures from a birthday dinner for his Mum with the rest of his family.

Tiger Woods offered this advice, “He’s got to be more…. just got to think about it a little bit more before you say something or do something.”

McIlroy’s great friend and fellow Irish major champion Graeme McDowell summed it up best: “When you start trying to prove things to other people and you stop playing for yourself it is a very dangerous place to be. He is playing more to prove things to the media, playing to the naysayers and people who say he shouldn’t have done what he has done.

“To me it is not equipment, it’s all technique and a little bit of belief. To me he is not swinging the club the way he was late summer last year,” added McDowell. “But he will be okay. Once he starts believing in himself again he will be back.”

Nike has to be a bit nervous. McIlroy already switched from their putter back to a Titleist Scotty Cameron model after just one competitive round in January. Over the years, many professional Tour players have taken the bucks and switched clubs. It hasn’t always worked out so well. Who knows what demons have settled between Rory’s ears, if any.

In fairness to McIlroy, his illustrious career has not been filled with much controversy. However, he described the Ryder Cup as “an exhibition” in May 2009. The following year, McIlroy said he regretted his comments and said that the Ryder Cup is “definitely not an exhibition.”

Later in 2010, he answered a media question regarding Tiger Woods potential of being a captain’s pick in the Ryder Cup by saying any member of the European Team would “fancy his chances against him.”

In 2011, following a poor showing in the Open Championship he told the media that he was “not a fan of golf tournaments that are predicted so much by weather” and added he would “rather play when it’s 80 degrees and sunny and not much wind.” These comments drew the ire of the British press.

This is all of the controversy you can dig up on the Irish kid with the black hair resembling an inverted bird’s nest, hidden by his Swoosh hat each week. Seriously, that’s it?

McIlroy is a Roman Catholic. Despite growing up in a small Irish village in County Down, he carries a British passport. His great uncle was killed by the Ulster Volunteer Force in a sectarian attack at his east Belfast home in 1972. McIlroy’s main sporting passion outside of golf is for the Ulster rugby team. He often interrupts his busy golfing schedule to attend matches at Belfast. He is frequently accompanied at Tour events by his father, Jerry.

Despite his recent misfortunes, McIlroy still retains the top spot in the Official World Golf Ranking by a considerable margin. He is scheduled to play in only two events before The Masters and is woefully short of competition. He has finished just 62 stroke-play holes in more than three months.

He recently purchased a $10 million home near The Bear’s Club in Jupiter, Fla. That is where he will try to resurrect his golf game in the next few weeks before heading to Augusta. My guess is that he will be ready when he makes the quest north in search for a Green Jacket.

McIlroy’s biggest problem? He is so well-liked, so revered that people want to see him succeed. Golf needs him to be the sport’s next icon. It’s a lot of pressure on a nearly 24-year-old. This Irish kid is 5-foot-9 and 160 pounds. There is not a bad bone in his diminutive body. He possesses the heart of a lion. He has proven that he knows where the jugular is and he is not afraid to put his spikes on it. Rory will roar again.