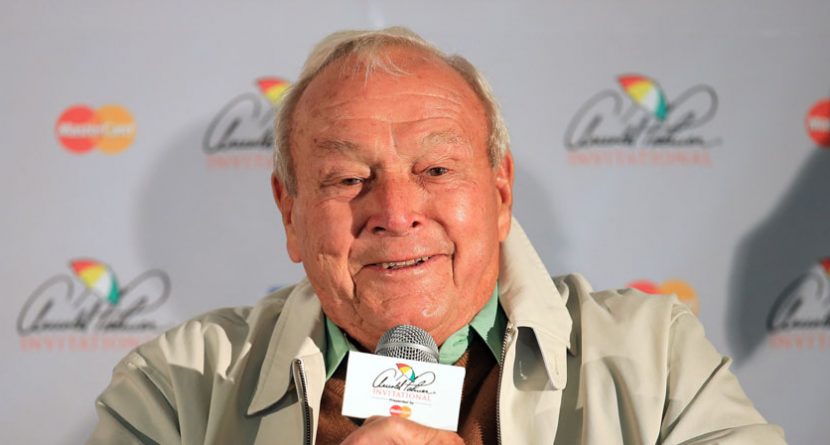 In April, the world of golf focuses on The Masters and the folks at Augusta National Golf Club, but, in March, it’s about the Arnold Palmer Invitational at Bay Hill Golf Club.

This week’s PGA Tour event in Orlando is really all about the King and golf’s annual trek to his doorstep. It’s a moment in time each year when we get a chance to pay Palmer the attention that he so justly deserves.

On Tuesday, Palmer delivered his annual State of the Game address from Bay Hill. It was no surprise he spent time talking about the controversial anchoring issue that is threatening the overall stability of the game. Palmer has supported the USGA in its proposed ban of the anchored stroke. At the same time, he has appealed to golf’s major bodies — the USGA, the R&A, PGA Tour and the PGA of America — to come to a consensus on the issue that will avoid two sets of rules, or bifurcation.

“I hope that behind scenes, four of the central golf organizations of my life, all of which do remarkable work growing and promoting the game, can come to some understanding and we continue to have one set of rules for everyone,” Palmer said. “Like most older players, I want to pass along to my grandkids a game that’s stronger and healthier than the one I inherited. That means a game with the interwoven threads of philanthropy and integrity intact.

“With the USGA’s and R&A’s decision to recommend a ban on anchored putting and the consequent opposition from the PGA Tour, the PGA of America, golf equipment manufacturers and some rank-and-file-amateurs, the stage has been set for something more ominous,” continued Palmer. “I think we are facing a serious challenge to the rules that govern the global game. My concern is that the fabric that unites us — one set of rules — will be irreparably torn.”

These are meaningful comments from one of golf’s greatest living legends. When Arnie speaks, everyone listens.

Turn back the calendar to 2001, when Callaway introduced a new ERC driver. The golf club exceeded the USGA limits for how quickly a ball springs off the clubface. The USGA had developed a test for the termed spring-like effect in 1998, believing that too much extra distance off the tee would make courses obsolete and corrupt the game. The ERC model was one of about two dozen drivers the USGA deemed to be non-conforming.

The USGA drew a line in the sane in 2001. Callaway went storming across it with the ERC and the ERC II. Leading the charge was Palmer, who shocked the industry by endorsing the ERC II as a club the masses could enjoy.

Things got testy. The USGA felt betrayed by Palmer, the honorary chairman of its member program since 1975. It even removed his signature from letters sent out to recruit new members. Palmer was labeled a traitor by many golf purists because he supported a non-conforming club. Arnie took the stance that the ERC should not be used in formal competition, but he saw no harm in using it for fun.

At the time, David Fay was the executive director of the USGA, and he said, “There’s one game and there’s one set of rules. We’re not inclined to treat the Rules of Golf as if it were some buffet line where you pick and choose.”

A few months ago, Fay who is now retired from the USGA said that it might be time for bifurcation of the rules. His concern was over how banning the anchored putter would affect the recreational amateur. And now we have Palmer, who once was supporting bifurcation, saying that we should not go down that road. This is an unbelievable reversal from a dozen years ago.

In the March 22 edition of Golfweek, Jeff Rude reported that combined, the PGA Tour Policy Board and its Players Advisory Council voted 22-2 against the ban. The PGA of America conducted a straw poll of its of 235 members representing its 41 sections last week at the PGA Conference of Leaders, and the PGA was unanimous in support of its opposition to the USGA’s ban on anchoring.

Mike David with the Indiana Golf Association, one of those associations, offered his perspective, “Indiana has not surveyed our (amateur) board to whether or not they will support the ban…we have definitely not taken any formal position.”

I maintain that the USGA and R&A have underestimated the ramifications a rule change banning anchoring. In my opinion, the next best thing to no ban would be the creation of a 12th condition of competition in USGA rules that deals with anchoring. Presently, the four major championships are not uniform to applying four conditions of competition (for example, the one-ball rule, practice putting at hole last played, embedded ball rule and removal of stones in bunkers are handled differently in the majors).

This way every stakeholder walks away with what they want and everybody plays by the same set of rules. Davis, though, disagrees with the idea saying the USGA doesn’t believe in such conditions for “real fundamental rules.”

Next Wednesday, I fly to Orlando to meet with Arnold Palmer. Pete Bevacqua, PGA of America CEO, and I requested the meeting. Our intent is not to change Palmer’s mind on anchoring, but more to explain why the PGA of America is so opposed to the proposed ban.

At 83 years old, Palmer is the chief of the golf tribe, and his perspective matters. But, for a guy who once was adamant in his support of a non-conforming driver because it posed no harm, his current views on the anchoring topic are interesting.

One mind has changed, however. This week, Tom Watson told me that he has reversed his original support of the proposed anchoring ban.

“I have talked to many amateur players who say they will quit or play less if the ban goes through,” he said. “I don’t see how that is good for the game. The PGA Tour is trying to protect its players’ ability to earn a living. My views have definitely changed.”