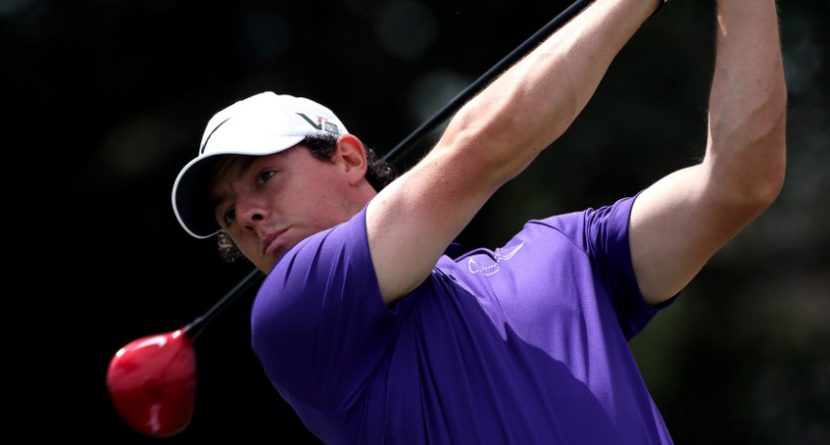 Rory McIlroy showed up at PGA of America headquarters on Monday afternoon around 3:30 p.m.

He was a bit early and spent the first few minutes of his visit posing with the pair of trophies that he would be presented later on, the PGA of America Player of the Year Award and the Vardon Trophy. Both were fruits of his outstanding 2012 season which has earned him the No. 1 spot in the Official World Golf Ranking.

The Player of the Year award is based on stroke average, money earned and tournaments won. The Vardon Trophy, named after the famous English golfer Harry Vardon, is given to the player with the low stroke average on the PGA Tour. Just a handful of professionals have won both awards in the same year. McIlroy joined the likes of Arnold Palmer, Ben Hogan, Sam Snead, Tom Watson and Tiger Woods in doing so. At age 23, Rory is the second youngest (behind Woods) to receive both awards in the same year.

The young Irishman showed up at PGA HQ in a pair of shorts, Nike tennis shoes and a pink and white striped shirt. He was wearing a white cap and had just finished playing in an outing at PGA National which was a fundraiser hosted by Ernie Els for Autism.

It was kind of ironic because just 10 days earlier McIlroy had made big news when he walked off the same course after the eighth hole in the second round of the Honda Classic, with Els as one of his playing partners.

But, this was a different day, and McIlroy was in better spirits after he rallied to finish in the top ten at Doral last week in the World Golf Championships event. His final-round 65 vaulted him way up the leaderboard, and he was openly feeling good about his last 26 holes when he was 10 under par.

I am not going to profess to be a Rory McIlroy apologist because there is nothing to apologize for when it comes to this kid. Sure, at 23 years old he has done and said a few minor things for which that he would like a mulligan. But, he is open, honest and wears his emotions on his sleeve. He is respectful and knows his responsibility to the game.

He was honored Monday at PGA Headquarters in front of PGA officers and a couple hundred staff members. He took two hours out of his busy schedule and participated in a photo shoot and fireside chat. I escorted him to his seat on the stage with the music from the Manchester United soccer team blaring over the loud speaker. Irish flags were waving and large cut outs of McIlroy and his curly locks were being flashed by the crowd. It was a festive occasion.

Through it all, McIlroy was a great sport as the PGA acknowledged his accomplishments and at the same time, poked some fun in his direction. I presented him with an alarm clock which was symbolic of his last-minute arrival to the First Tee on Sunday at the Ryder Cup in his match against Keegan Bradley.

“Look, Rory,” I said. “The last thing I want as PGA President is for my defending champion to be late to the tee at Oak Hill this summer. So, here is an alarm clock to make sure you wake up in time.”

He blushed, smiled and looked down at the ground. A typical, innocent, patented McIlroy reaction. One that was similar when he was told he had a spot on his shirt during the photo shoot. This was a result of a quick lunch at Rocco’s Tacos on his way to the ceremony. Later on, his angst on the soiled shirt become more apparent when it became clear he was headed down to Miami to watch his girlfriend, Carolyn Wozniacki, the Danish tennis star, compete in a match. Hey, you can’t show up for that with taco stains on your shirt.

When asked about the putting lesson that Steve Stricker gave Tiger Woods prior to the WGC event last week, Rory was candid.

“Yeah, I had a little bit of a problem with that,” quipped McIlroy. “It’s not like Tiger needs any help with his game right now. When he putts like he did last week nobody can beat him. But, I know he and Stricker are good friends, so I guess he was just trying to help him out.”

So, does that mean McIlroy would consider taking a putting lesson from his Irish buddy Graeme McDowell, former U.S. Open champ?

“No,” a hesitating McIlroy answered with a sheepish grin. “I would never take a putting lesson from Graeme. But, I would take one from Stricker.”

Quick on his feet and ever present with his surroundings, how can you not love the kid?

When asked who the most famous person was in his hometown of Holywood, Ireland, Rory said it was his dad, Gerry. McIlroy revealed that there was no stature erected in Holywood to honor him. However, a local bakery sells cupcakes with his face on them.

He talked about the sacrifices that his parents had made enabling him to play golf.

“They both worked all of the time. They worked different shifts and most days they would only see each other for an hour. I think it was the secret to their marriage,” laughed Rory.

McIlroy loves living in Jupiter, Fla., just outside the gates to The Bear’s Club where he can play and practice.

“It’s nice to have a place to call home between tournaments. I love living in the States,” he said.

The most famous person McIlroy has ever met through golf with? His list is solid and includes Presidents and numerous leaders of foreign countries.

“I would say it was Rudy Guiliani. I got a chance to play golf with him,” revealed McIlroy. “To think, I am playing golf with the mayor of New York City when 9/11 happened. That was something I will never forget and that was very special to me.”

McIlroy is 5-foot-9 and weighs 160 pounds. He is wiry, and it’s not a surprise that he likes boxing. His forearms and biceps are muscular. His waist is tiny, but you get the sense you wouldn’t want to step into the ring with him because at some point that feisty Irish heart will drive the competition.

The PGA Tour is lucky to have him as a regular. The PGA of America is blessed to call him their defending champion. The world of golf can look forward to many great decades of the Rory Mcilroy era.