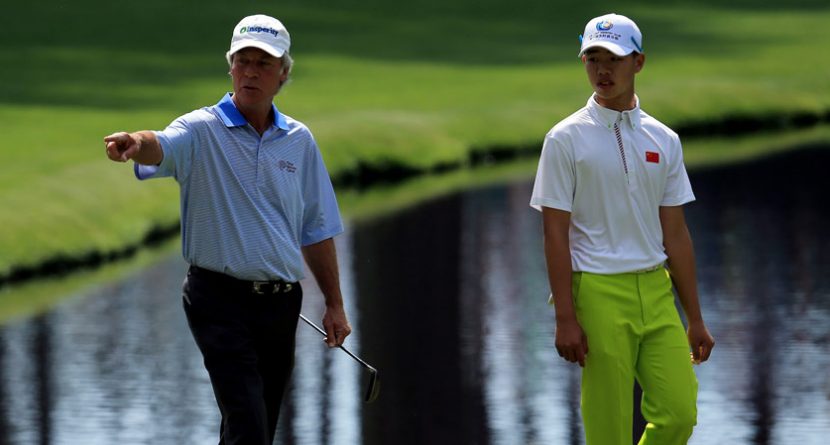 In 1984, I attended my second Masters and watched Ben Crenshaw win the tournament that year by two strokes with a score of 11-under-par 277.

Back then he was known as Gentle Ben. The handsome, young Texan had blonde hair, and he was one of the hottest commodities on the PGA Tour. At 32 years old, Crenshaw was truly one of the stars of that era.

Twenty-nine years later, he shows up at Augusta National Golf Club with two green jackets to his name. His second victory came in 1995 just a few weeks after his mentor, the legendary Harvey Penick passed away. Who can forget the image of Crenshaw on the 18th green after making the winning putt? His head buried in his hands, sobbing over the emotional victory he had dedicated to Penick.

Augusta National Golf Club always has a flair for the dramatic, and they did not disappoint with the pairings on Thursday and Friday. Crenshaw, the grizzled 61-year-old veteran was paired with 14-year-old Tianlang Guan, the Chinese junior sensation and Matteo Manassero, the 19-year old Italian who was the low amateur at the 2010 Masters at the age of 16.

Consider this: Crenshaw is playing in his 42nd consecutive Masters this year. Guan (1) and Manassero (2) have a combined three Masters appearances. In fact, those kids’ ages combined (34) for the number of Masters’ appearances that Grizzled Old Ben has.

Crenshaw, who was one of the game’s great putters of all-time, three-whacked the hole from 25 feet for a bogey. As he walked off the green he was outwardly disgusted, smacking his driver on the ground a few times as he approached the ninth tee. He still has that fire in his gut.

But, it was clear on Thursday that it was Gentle Ben again, and his primary mission these two days was to pass the torch to a new generation of golfers. Crenshaw ranks tied for eighth all-time behind Gary Player (52), Arnold Palmer (50) and Doug Ford (46), as well Raymond Floyd, Jack Nicklaus and Billy Casper (each with 45) in overall Masters appearances with his 42. There will probably be a day when he hits the ceremonial tee shot from hole No. 1.

Not to be outdone, Crenshaw hit a great second shot to within 15 feet of the hole. He drained the putt and wound up shooting a 6-over 78. That was no doubt a disappointing score for this proud Texan. However, I would make a case that short of those two Sunday afternoons in 1984 and ’95, this might have been one of Crenshaw’s finest days on the most hallowed grounds in all of golf.

It was a great gesture and one that no doubt required absolutely no thought from Crenshaw: spend two days with two rising starts in the game and give something back. Show them the ropes at Augusta and someday when these two kids contend for their own green jackets, they will remember these two special days with Crenshaw and the advice they received from Gentle Ben might make the difference.

That is a formidable group. Woosnam, Langer and Couples are in the field based on the fact they are all former Masters champions. Approximately, 10 percent of the field is anchoring a long or belly putter this week.

The USGA and R&A are expected to make some announcement on the fate of anchored putters soon. You have to wonder what impact it will have on this group of players. How sad it would be to see a 53-year-old Fred Couples no longer be able to play in the Masters because of the proposed rule change.