Teenager Lydia Ko Tees Off for First Time as a Pro 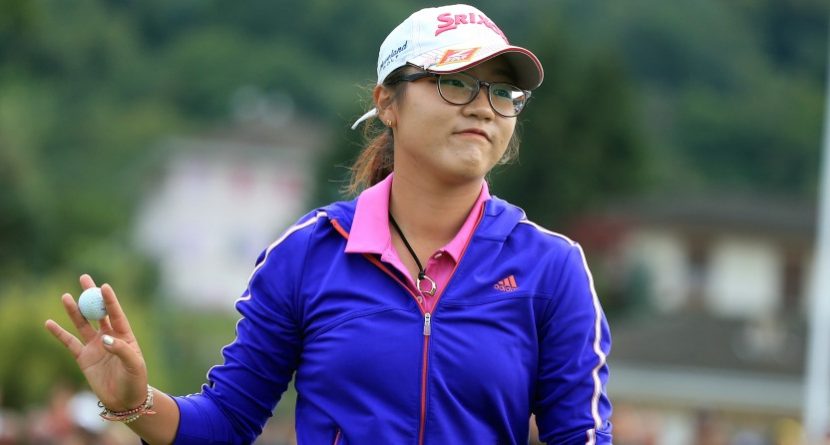 Lydia Ko‘s first round is underway at the CME Group Titleholders event at the Tiburon Golf Club in Naples, Fla. No big deal – the 16-year-old has competed in 15 LPGA events the past two years, 11 this year alone. She’s ranked No. 5 in the world. It’s just another day on the course.

Only it is a big deal, because for the first time, Ko can walk with some money for her performance.

Born in South Korea but raised in New Zealand, the teenager opted to become a professional, and thus accept money and sponsorships, last month. She’ll be a full-fledged LPGA Tour member starting in 2014, having been granted an exception to the tour’s minimum age limit of 18, but she still earned her way into the LPGA season finale.

It’s a bit odd to hear the fifth-best women’s player in the world tell reporters this week, “I don’t have any money yet,” when asked questions about where she’s going to live and what clubs she’ll use. But she’s right, unless you count the $80 per month allowance Ko receives from her parents.

The dough will come soon enough, though, maybe even on Sunday. The victor at the Titleholders will collect $700,000, the biggest check in women’s golf. Yet she doesn’t have to win to earn money; she just has to make the cut, which she’s done in every LPGA Tour event she’s started. Had Ko been a pro all season long, she’d likely have already earned more than $1 million in tournament winnings alone.

Should she prevail in Naples – which would be a feat considering Ko hasn’t been able to practice much because of high school exams – it would mark her third career LPGA Tour win, and fifth overall. Ko won the 2012 Canadian Women’s Open at 15, making her the youngest winner of an LPGA event, and she defended that title this season. She’s also won in Australia and New Zealand, and came close to winning her first major in September at the Evian Championship, where she was runner-up.