The 2016 Olympic Golf Course In Rio Is Ready To Go 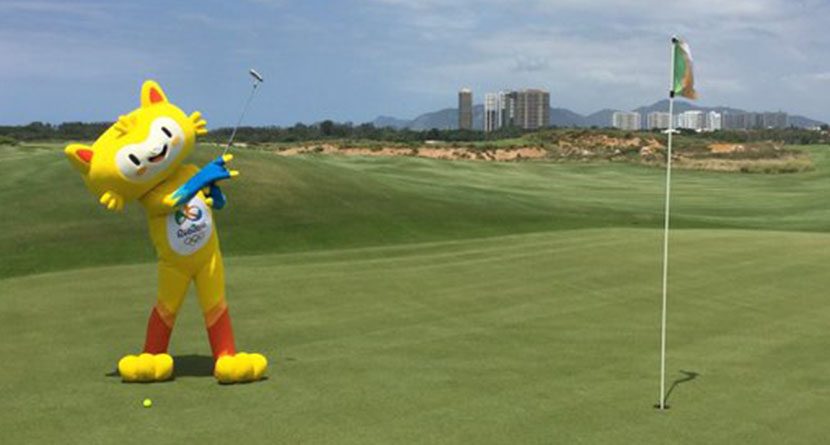 The much anticipated Gil Hanse-designed golf course that will host the 2016 Olympic Golf Competition was unveiled to the public on Nov. 22 during a ceremony in Barra da Tijuca near Olympic Park and Olympic Village. The 18-hole course was built on 240 acres and will be used to help grow public participation in the sport following the games.

One of the 2016 Games’ mascots, Vinicius, struck the first shot on the course during the ceremony.

The course, which was funded with private money, boasts two artificial lakes that have become home to some not-so-artificial wildlife.

When you’re cutting the greens on the Rio Olympic Golf Course and you come across this… #Jacobsen #10monthstogo pic.twitter.com/TsTaPenorZ

“It is a very challenging course,” Paulo Pacheco, the president of the Brazilian Golf Confederation, said. “It has plenty of undergrowth and is very open so the wind will challenge the golfers here, who will also have lots of bunkers to deal with. This layout is narrow and will demand great precision from the players.”

The course will be meticulously maintained in the build up to the games, being “trimmed three or four times per day and watered every 48 hours.” Some of the world’s top players have voiced varying opinions on how they highly they covet a chance to play the Rio layout, most notably Adam Scott, Jordan Spieth and Tiger Woods.

The International Golf Federation will determine the field of 60 men and women based on their world rankings. The men’s competition will take place from Aug. 11 to Aug. 14 and the women’s event will run from Aug. 17 to Aug. 20.