The 5 Golfers Who Have Achieved the Career Grand Slam 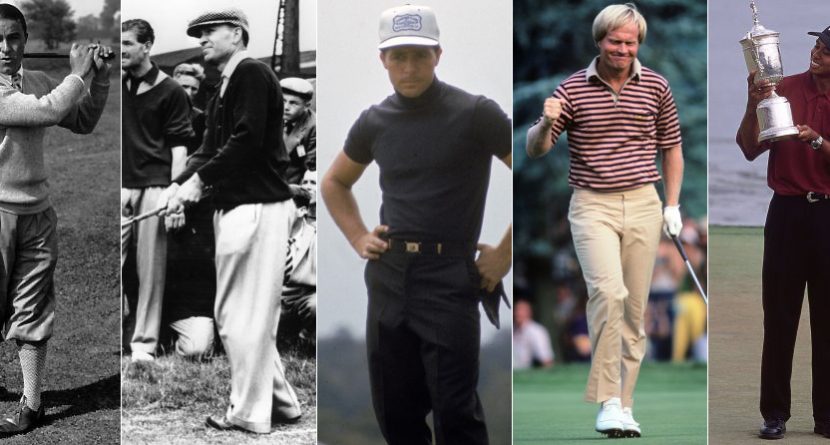 Since the establishment of the Masters Tournament in 1934, marking the modern era of the golf grand slam, only five players – Gene Sarazen, Ben Hogan, Gary Player, Jack Nicklaus and Tiger Woods – have broken through to have their names etched on each of the Masters, U.S. Open, Open Championship and PGA Championship trophies. Phil Mickelson would join the club this year if he takes the 114th U.S. Open at Pinehurst.

The modern grand slam is a remodeled version of the old grand slam, which was defined before Arnold Palmer’s era as calendar-year victories in the U.S. and British Opens and U.S. and British Amateurs. In his book titled “Arnie and Jack: Palmer, Nicklaus, and Golf’s Greatest Rivalry,” Ian O’Connor wrote: “On his way to the 1960 British Open at St. Andrews, Palmer and his sportswriter pal Bob Drum were talking over drinks when Arnold said he’d like to win the British and then the PGA to collect a grand slam of pro majors. Drum wrote it, the idea stuck…”

As Mickelson takes his first attempt to complete the career slam this week, here is a look back at the five golfers who have achieved the feat, and their best performances at the U.S. Open: Gary Player – 1965 U. S. Open
South African Gary Player became, in 1965, the first foreign golfer to win the U.S. Open in 45 years. He and Kel Nagle of Australia finished in a deadlock with scores of 282, 2-over-par at the Bellerive Country Club in St. Louis. Both hit 54 out of 72 greens and each used 128 putts. Nagle had 11 birdies to Player’s eight, but the Aussie was over par on more holes. Player “putted superbly” in the playoff and was five up through the first eight holes on his way to winning the tournament with a 71, three shots better than Nagle. With this victory, Player completed the grand slam at age 29, and it remained his only U.S. Open title. At the prize-giving ceremony after the playoff, Player announced that he would donate $25,000 of his $26,000 prize to the USGA, asking that $5,000 be earmarked for cancer relief work and $20,000 to promote junior golf. Jack Nicklaus – 1980 U.S. Open
In 1980 at Baltusrol, 23 years after his first U.S. Open, Jack Nicklaus won a fourth and final national championship (after titles in 1962, ’67, and ’72). He shot a record score of 8-under-272, and joined Willie Anderson, Bob Jones, and Ben Hogan as the only men to win the U.S. Open four times. Nicklaus and Tom Weiskopf equaled the lowest Open round ever with 63 on the first day. Nicklaus’ halfway score of 134 was the lowest ever, his 54-hole score of 204 was the lowest, and his winning 272 was the lowest 72-hole score ever. Tiger Woods – 2000 U. S. Open
Tiger Woods turned in arguably the most dominating performance ever in his first U.S. Open win in 2000 at Pebble Beach. He held tournament records for the largest lead after 36 holes (six strokes), lowest 36-hole score (134, tied with Jack Nicklaus, T.C. Chen and Lee Janzen), largest 54-hole lead (10), lowest 72-hole score (272, tied with Nicklaus and Janzen), most strokes under par (12, tied with Gil Morgan, who reached that total in the third round in 1992, only to collapse and finish tied for 13th) and, of course, largest margin of victory. He won by 15 shots – two better than the record for a major previously set by Old Tom Morris at the 1862 British Open. Woods added U.S. Open crowns in 2002 and ’08.