The Age of Entitlement 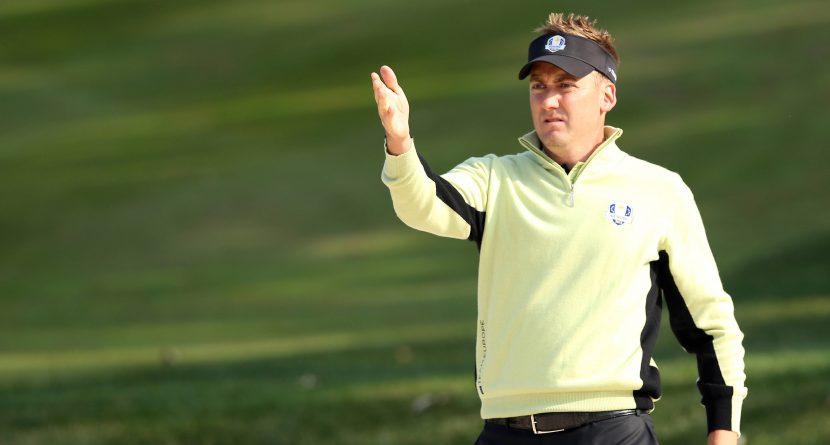 If you spent Tuesday afternoon doing something other than mechanically jabbing the refresh button of an internet browser in the hope of unearthing Twitter gold, you may well have missed Ian Poulter’s baffling attack on Korean electronics giant Samsung.

In that case, bear with me.

The Englishman, as you may or may not know – it depends solely on the diligence with which you monitor his public pronouncements; and, let’s be honest, one could be forgiven for jamming that particular frequency – has spent years building and furnishing a mansion at Lake Nona, in Florida.

A Stepford Xanadu of vaulted ceilings, glass and space-age gadgetry, the narrative of its halting progression from muddy foundation to nouveau riche palace will be familiar to many of the Ryder Cup hero’s 1.4 million Twitter followers.

The same can be said, of course, of his adolescent propensity for the throwing of tantrums. His feed, punctuated by flurries of digital foot stomping, ad hominem spluttering and self-aggrandisement, stands as testament to a life lived free of introspection.

On Tuesday, his grand obsession and unguarded inner life collided – spectacularly, unedifyingly – to produce a single, 138-character tweet, in the process marking what can confidently be judged a low point in the PGA Tour’s burgeoning relationship with social media.

“I bought 19 @SamsungSupport TV’s [sic] for the new house,” quoth Poulter. “1 is faulty and they want to fix it in 1 weeks [sic] time. DO Not buy @Samsung rubbish.”

Rarely has a communique intended for public consumption proven so tone deaf to the concerns and means of its audience.

Fuelled by disbelieving retweets, the pitter-patter of sarcastic ripostes soon became a deluge: some lamented Poulter’s plight (“My heart aches!”); some volunteered unique (and painful) uses for the malfunctioning device; others still struggled with the arithmetical implications of it all. (Were some rooms to be equipped with multiple screens, like the office of a 1980s TV network executive?)

While Poulter engaged in some damage limitation of his own, stating for the record that he would “make do” with the remaining 18 televisions, Samsung dispatched a customer service rep to avert public relations catasrophe.

It’s easy to dismiss Poulter as an outlier, a figure set resolutely apart from the mainstream of PGA Tour opinion. He has, after all, spent a decade labouring to carve out a position for himself as the circuit’s arch iconoclast, its metrosexual rebel without a cause.

But to unquestioningly endorse such a stance is to take Poulter’s own hype at face value.

In reality, his sense of entitlement stems not from some province uniquely his own; it’s hard-wired into the culture and lifestyle of the PGA Tour.

Something of a slow learner in golfing terms – he famously turned professional with a handicap of 4 – Poulter’s exuberance more likely stems from his own insecurity and gleeful sense of disbelief.

Like a passenger suddenly promoted to first class, he remains both giddy at his good fortune and proud enough to realise his own warped notion of a plutocratic lifestyle. Even after all these years, it’s still about the free champagne and canapes.

As such, Poulter is less a black sheep of the PGA Tour than its unfiltered and unruly ego.

This, after all, is an entity that has taken to rewarding sporadic and underwhelming performance on a scale hitherto unmatched in world sport.

As things currently stand, a week shy of the season-ending Children’s Miracle Network Classic, 95 players have exceeded $1 million in PGA Tour earnings for the season. That, of course, doesn’t include FedEx Cup bonuses and sponsorship contracts.

For those unsure of their future, struggling to escape the long shadow cast by the Web.com Tour and its many, less prestigious cousins, the perks of membership are counterbalanced by a creeping uncertainty and sense of impermanence.

Long-term members, however, those at ease with both their talent and fathomless wealth, soon grow accustomed to a life lived without inconvenience, where customer service can usually be reduced to a question of receiving exactly what you want before you know you want it (and for free).

Here, Poulter’s irritation at the discovery that life could be otherwise takes on the character of a broader dysfunction.

In his presumption and lack of perspective, can we not discern something of, say, Bubba Watson’s unapologetic taste in expensive jewellery; the world No. 1’s habitual willingness to exchange appearance fees for competitive disinterest, and – whisper it – the combustible self-regard that saw Jeff Overton wrestled from his limousine (by a member of the plebian class, no less!) at a university basketball game last year?

Golf has hit the big time, alright; but rarely in the game’s professional history have the stakes looked quite so small.