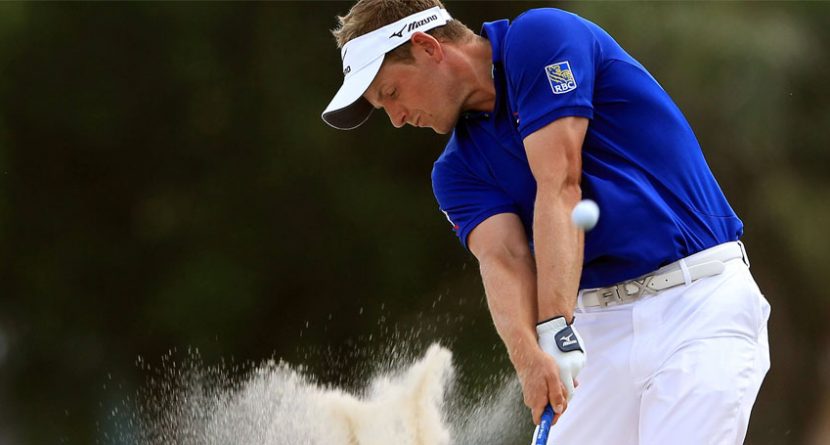 It was May 29, 2011 when Luke Donald landed on the lofty perch atop the Official World Golf Rankings for the first time in his career. With a memorable victory at the BMW PGA Championship on the European Tour – defeating his countryman Lee Westwood in a dramatic final round – the affable, easy-going Englishman became the No. 1 player in the world. It was a welcome achievement, falling right in line with the goals he’d set at the end of 2010.

“When we first started with Luke we set a goal of winning on both Tours (PGA Tour and European Tour) and being inside the Top-5 world rankings,” said Ben Shear, the Founder and Director of Strength & Conditioning at Athletic Edge. “I told Luke, ‘That was an amazing accomplishment. Congrats, you’ve done something very few players have done in golf. Even Phil Mickelson hasn’t done that.'” Shear is the Head Strength and Conditioning Coach for “Back 9 Tour Services.”

Along with his colleagues at Athletic Edge, Shear has played a key role in Donald’s recent success. Working with professional and amateur golfers for over 10 years, he is part of a team that includes massage therapist Craig Knight and physical therapist Jeff Banaszak. The men specialize in creating unique programs using bio-mechanical testing and functional training in the gym to maximize their clients’ physical abilities. Other golfers under their guidance include Webb Simpson, Jason Day, Rory Sabbatini, Bo Van Pelt, Kyle Stanley and Tim Clark.

At the Athletic Edge Performance Center in New Jersey, Shear and his team utilize 3-D analysis to break down the complexities of their clients’ sports-specific movements, such as a golf swing. Studying the full range of motion, bio-mechanical errors can be pinpointed. An athlete’s posture, functional strength, power, balance, mobility, stability, endurance and coordination are thoroughly assessed in order to correct any weaknesses, imbalances and compensations. When Shear and his team first analyzed Donald in 2010, they noticed that a lack of shoulder mobility and wrist issues (stemming from a wrist injury in 2009) were hindering the golfer’s range of motion. Shear then designed a regimen tailored for Donald, using functional fitness training to stabilize, strengthen, and condition his client, to produce a more efficient swing.

“We worked closely with his swing coach, tweaking positions of club, improving his driving, increasing his shoulder mobility, helping him getting the club where he wanted it to be.”

“We weren’t looking to make Luke a long-hitter. That’s not Luke’s game,” Shear said about his 5’9″, 160-pound client. “We wanted to make him stronger and more powerful as a whole, emphasize his strengths.” Of course, a beneficial by-product of that was Donald adding around 10 to 15 yards to his game.

Shear says they consistently monitor everything with their athletes at Athletic Edge. With Donald, they are continually re-assessing and testing in a systematic way, making him fractionally better in little things every day – all of which add up to major improvement over the long haul and making him more resilient and less susceptible to injury. And Donald is ever-the-eager student, wanting to get better and better, while putting in the time to do it.

“Luke is the consummate professional. He’s disciplined. So focused and hard-working. He’ll say, ‘Tell me exactly what to do, and I’ll do it, no excuses.'”

The diligent student held the top spot of the OWGR for a total of 53 weeks – 40 of them consecutively. Next week, the 35 year-old is back in his homeland for the Open Championship at Muirfield Golf Links.

Donald has 14 professional wins but has yet to record a major victory. In fact, his resume in the majors is far from perfect.

Donald has tied for third at two majors — the 2005 Masters Tournament and the 2006 PGA Championship — and has seven other top-10 results. Other than that, he’s struggled.

“After becoming No. 1, the next step is obviously winning a major and validating that ranking,” said Shear. “But there’s no need for drastic changes. You’ve got to stay with what got you there.”

“We’ve seen it with (David) Duval and numerous players. Some golfers get to that point where they’re No. 1 and they make drastic changes and it hurts them. We’re not doing that.”

And during a major week, there certainly aren’t any drastic changes in the routine for Shear’s players. It’s all about the training prior to it; putting the player in position to peak at the right moment.

“We work hard leading up to this week and once it’s time, you let them go play golf.” “It’s important to have lots of mental energy, time to practice, and time for commitments and media. You have to find a balance between them all. You never know what other obligations you’ll get dragged into. And with the weather and bad conditions over there, it can be difficult.”

But Shear believes it’s just a matter of time for his client to capture that elusive other goal. If it’s not this week at the Open Championship he believes it’ll be another major.

“You talk about players who achieve greatness, this guy’s right there. I have no doubt he’ll get one, if not many more. People forget there were conversations about Mickelson for a long time about how he couldn’t win the big one, and what happened? He won. And then the floodgates opened.”