The History Of The Masters Honorary Starters 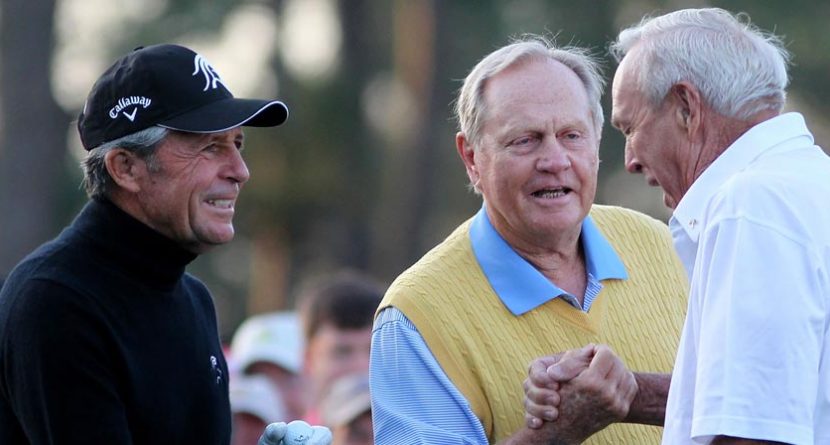 On Thursday morning at the start of the Masters, Jack Nicklaus, Arnold Palmer and Gary Player will walk to the first tee at Augusta National.

Each will be announced by the starter, hit their tee shot, then pose for pictures  for the patrons who arrive bright and early with the hopes of seeing these legends – who, between them, won 13 Masters – again.

This current group began just two years ago, however, after Player decided he could join Jack and Arnie. Player competed 52 times in the Masters, Arnie and Jack 50 each.

Of these three, Arnie was first to take up the role, acting as lone honorary starter in 2007 after the passing of Sam Snead in 2002 and a four-year gap without one. Jack joined Arnie in 2010.

Before them, however, the tradition of the honorary starter began in 1963 with Jock Hutchison and Fred McLeod on the first tee. They won the first two Senior PGA Championships, played in 1937 and ’38 at Augusta National. The pair had the first tee time for a decade, before McLeod held the job alone for three years until his death in 1976.

It wasn’t until 1981 that Gene Sarazen and Byron Nelson took resumed the tradition. Ken Venturi stood in for Nelson in ’83 because of his wife’s poor health.

A year later, Sam Snead joined Sarazen and Nelson, holding the triumvirate post from 1984-1999. Sarazen died weeks after the ’99 Masters leaving Nelson and Snead together for two years. Nelson stepped aside in 2002, clearing the stage for Snead, who died a little over a month after his last ceremonial tee shot.

Palmer, 83, Player, 77, and the 73-year-old Nicklaus are in just their third year together, however, they are arguably the most acclaimed of the honorary starters.