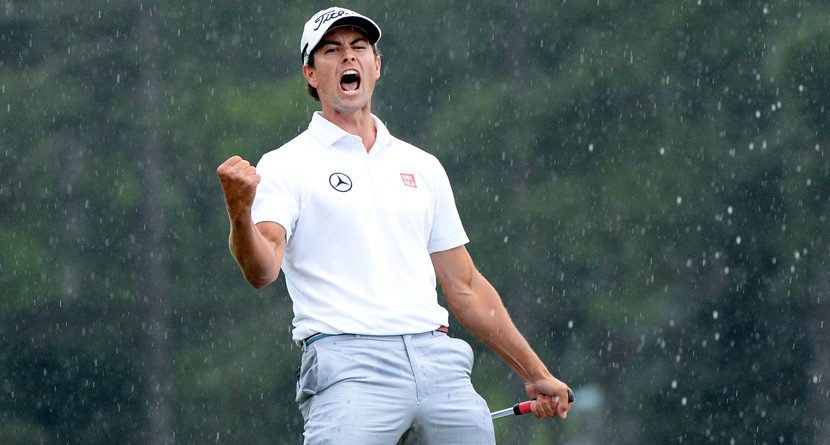 Winning the Masters Tournament means you’ll be remembered forever as part of the “tradition unlike any other.” Along with all the other spoils that victory brings, perhaps the most sacred component besides the green jacket is the lifetime invite to compete in the event. Here’s a look at the former champions returning to Augusta this April to compete in the 2014 Masters Tournament.

Angel Cabrera – 2009 Masters: Angel Cabrera slipped into his green jacket due in part to a stumbling Kenny Perry in 2009. After birdieing 15 and 16, Perry bogeyed the last two holes, falling into a three-way playoff with Cabrera and Chad Campbell. Cabrera was even-par through two playoff holes, good enough to take down Perry and Campbell and claim his second career major title.

Fred Couples – 1992 Masters: Thanks to some incredibly good luck, Fred Couples was able to claim his first major title at the tournament he loved the most. Lady Luck kicked in for Couples on the treacherous par-3 12th hole when he left his tee shot short and it rolled down the bank. Instead of falling into Rae’s creek like nearly every ball in history before it, Couples’ ball clung to the hill, enabling him to save par and capture his first and only major championship.

Ben Crenshaw – 1984 & 1995 Masters: In 1984, Ben Crenshaw claimed his first green jacket by two strokes over Tom Watson for the 10th win of his career and his first major title. Crenshaw had a storied amateur career, due in large part to lessons learned from legendary teacher Harvey Penick. When Penick passed away early during Masters week in 1995, Crenshaw was heartbroken. Perhaps through divine intervention (if you believe in that sort of thing), Crenshaw played on and captured his second green jacket and the final win of his PGA Tour career at the age of 43.

Trevor Immelman – 2008 Masters: Despite his recent struggles, Trevor Immelman has been able to pencil in the Masters on his schedule since 2008. That year, Immelman returned from surgery to capture his first and only major championship. He held at least a share of the lead all four days and despite a final-round 75, was able to hold off four-time Masters champ Tiger Woods.

Zach Johnson – 2007 Masters: Zach Johnson was a bit of a surprise winner at Augusta in 2007 but has since become one of the biggest stars on tour. Proving that his major wasn’t a fluke, Johnson has won 9 times since picking up his green jacket. He’s already won twice this year and looks to be in prime position to capture his second major championship at this year’s tournament.

Bernhard Langer – 1985 & 1993 Masters: With the help of Curtis Strange’s struggles late, Bernhard Langer came from four shots back to claim a two-shot victory over Strange, Seve Ballesteros and Raymond Floyd for his first green jacket in 1985. Eight years later, the German won his second Masters title. Langer is still considered the best player to come out of Germany and was the only player from there to win a major championship until Martin Kaymer won the PGA Championship in 2010. Sandy Lyle – 1988 Masters: Capping a three-year run of improbable Masters champions, Scotland’s Sandy Lyle slipped on the green jacket for his second major title in 1988. Lyle slept on the lead Friday and Saturday but was tied with Mark Calcavecchia coming to 18 on Sunday. After hitting his tee shot into a fairway bunker, Lyle pulled off one of the greatest shots in Masters history. Pulling a 7-iron from his bag, Lyle hit his approach over the flag, using the slope of the 18th green to bring the ball back to the hole. He made the putt to complete a memorable up-and-down and claim his place among the game’s greats.

Phil Mickelson – 2004, 2006, 2010 Masters: Until 2004, Phil Mickelson had the dubious honor of being “the best player without a major.” Since he jumped for joy on the 18th at Augusta nearly a decade ago, Mickelson has collected a PGA Championship in 2005, two more green jackets (2006, 2010) and a claret jug last summer. En route to his third green jacket in 2010, Mickelson put together one of the greatest stretches of golf in Masters history and pulled off the famous shot from the pine straw on 13.

Larry Mize – 1987 Masters: While Greg Norman had many a foil in his pursuit of the green jacket, his defeat at the hands of Larry Mize in 1987 was perhaps the most gut-wrenching. After Norman had a putt to win outright go begging in the cruelest fashion on 18, and Seve Ballesteros bowed out of the three-man playoff, the stage was set for Mize and Norman at the 11th. Mize proceeded to hole out from almost 100 feet away to seal Norman’s fate. For Mize, the Augusta native, it was his only major victory.

Mark O’Meara – 1998 Masters: Mark O’Meara was another player who, for a time, was saddled with the moniker “best to never win a major.” That all ended in 1998 when he won not one, but two major titles. The first of those came in impressive fashion at Augusta. Trailing early, O’Meara birdied three of the final four holes, including at 20-foot birdie putt on 18 to punctuate the performance and don the green jacket.

Jose Maria Olazabal – 1994 & 1999 Masters: Jose Maria Olazabal added his name to the list of multiple Masters winners in 1999 when he parlayed a one-shot lead going into Sunday into a two-shot victory over Davis Love III and Greg Norman. In 1994, Olazabal claimed his first major title, beating Tom Lehman by two strokes to win the Masters.

Charl Schwartzel – 2011 Masters: In one of the most impressive finishes in history, South African Charl Schwartzel added his name to Masters lore, birdieing the final four holes en route to a two-shot victory over Australians Adam Scott and Jason Day. Schwartzel also added a hole-out eagle at No. 3 to his impressive round. For Schwartzel, it was his first, and to this date, only major championship victory.

Adam Scott – 2013 Masters: Just eight months after bogeying his final four holes to lose the Open Championship to Ernie Els, Adam Scott wiped away all the negative noise surrounding his play in major championships and shed the title of “best to never” with an incredible playoff win over 2009 Masters champion Angel Cabrera. Scott made birdie on the second playoff hole to claim his first green jacket, his first major and the first Masters title for an Australian-born player.

Vijay Singh – 2001 Masters: During the late 1990s and early 2000s, the world’s answer to Tiger Woods was Vijay Singh. The Fiji native won three majors and was world No. 1 for a total of 32 weeks. Singh’s Masters title in 2001 was his second major triumph and came by three strokes over Ernie Els.

Craig Stadler – 1982 Masters: “The Walrus,” as Stadler is affectionately known, claimed Masters glory in a sudden-death playoff in 1982. Stadler bogeyed the final hole in regulation to fall into the playoff with David Pohl, but maintained his composure and beat Pohl with par on the first playoff hole. This year, Stadler will be making his final Masters start alongside his son, Kevin, who will be making his first.

Bubba Watson – 2012 Masters: Bubba Watson was always known for his ability to see things others couldn’t and to create masterful golf shots because of it. He made sure that history will always remember him for the same reason in 2012 when he pulled off one of the most miraculous golf shots in history to put him in position to win the Masters. From the pine straw right of the 10th fairway, Watson unleashed a massive hooking wedge shot. It found the green and cozied up to makeable two-putt range. Watson converted and claimed his first major championship, denying 2010 Open Champion Louis Oosthuizen his second major triumph.

Tom Watson – 1977, 1981 Masters: Tom Watson won eight major championships in his career: five Open Championships, a U.S. Open in 1982 and two Masters. His first green jacket came in 1977 when he defeated Jack Nicklaus by two shots. In 1981, Watson again played foil to Nicklaus by two strokes. Watson has continued to impress in his advanced age, nearly winning the 2009 Open Championship and finishing T-4 at the Masters in 1997, 15 years removed from his second win at the event.

Mike Weir – 2003 Masters: In 2003, Mike Weir became the first Canadian to win a major championship when he topped Len Mattiace in a playoff to win the Masters. It was also the first time a left-handed player had won the event. Weir began the day two shots off the lead but fired a 4-under-par 68 to get into the playoff with Mattiace. Since his victory at the Masters, Weir has faced his share of struggles on the course, having only won twice since.

Ian Woosnam – 1991 Masters: Ian Woosnam spent 50 weeks as the No. 1-ranked golfer in the world, but his crowning achievement in the game came at the 1991 Masters. Going into the 72nd hole on Sunday, Woosnam was tied with two-time Masters champion Tom Watson and future two-time champ Jose Maria Olazabal. When Watson and Olazabal stumbled making double-bogey and bogey, respectively, Woosnam held on and made par at 18 to claim the green jacket. His Masters win would be his only in a major championship.