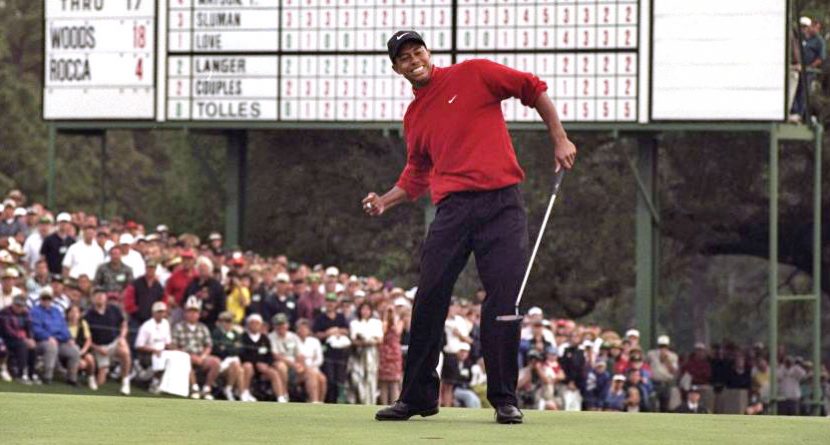 For nearly 80 years, the Masters Tournament has truly lived up to the mantra of being a “tradition unlike any other.” From Tiger Woods to Jack Nicklaus, golf’s greatest players have put their skills to the test in trying to etch their names amongst those to have competed on the sport’s biggest stage.

As the golf world turns its attention to Augusta National this week, we look back at some impressive performances from players who became entrenched in the pages of golf history. 1997 will always be remembered as the year of “The Tiger.” At 21 years old, Woods quickly burst on the pro golf scene as one of the sport’s hottest players. His calling came at the Masters in which Woods not only broke down barriers in becoming the first non-Caucasian player to win at Augusta, but he did so in dominating fashion. Woods set tournament records that still stand to this day in fending off Tom Kite by 12 strokes while accumulating a four-day score of 270 (−18).

“The King” was only 30 years old at the time, yet it was still a memorable moment in an illustrious career filled with plenty of them. Palmer picked up the second of his four Masters victories by birdieing the final two holes to win by one stroke over runner-up Ken Venturi. The event was also highlighted by a young Jack Nicklaus, who was playing in his second Masters. At the tender age of 20, Nicklaus, the reigning U.S. Amateur champion, made the cut for the first time at Augusta and finished tied for 13th place.

In the first playoff at Augusta since 1970, Fuzzy Zoeller picked up the first of his two major titles with a birdie on the second hole of the playoff with Ed Sneed and Tom Watson. Jack Nicklaus stayed within striking distance with an impressive final round, but he bogeyed 17 to miss the playoff by one stroke. Tom Kite had a double-bogey at 16 for an even-par 72 in the final round to finish fifth and three strokes back of Zoeller.

With a 17-under 271, the “Golden Bear” won his second Masters title, a collection that would grow to include six in all. That score was a tournament record at the time, three strokes better than Ben Hogan’s 274 in 1953, but it was later matched in 1976 by Raymond Floyd and bettered by Tiger Woods’ 270 (−18) in 1997. Nicklaus’ nine-stroke margin of victory was also a record until Woods’ 12-shot ’97 triumph.

The 50th anniversary of the Masters also played host to a historic moment for one Jack Nicklaus. By shooting a final-round 65 (-7), he recorded his 18th professional major and a record sixth Masters championship with a one-stroke victory over Tom Kite and Greg Norman. At age 46, the victory made Nicklaus the oldest winner of the Masters and the second-oldest winner of any major championship behind Julius Boros, the 48-year-old who won the 1968 PGA Championship.

Just days after the passing of his longtime friend, coach and mentor, Harvey Penick, “Gentle Ben” put on a memorable performance in winning his second Masters at the age of 43. During his post-tournament interview, Crenshaw said that despite the mandatory rule of carrying 14 clubs in your bag during a round, he had a 15th club in his bag – a reference that Penick’s spirit was with him during an emotional weekend at Augusta National.

The South African finished two strokes ahead of Aussies Adam Scott and Jason Day to win his first major championship. The 2011 Masters featured several story lines: Ben Crenshaw made his 40th consecutive Masters appearance; Martin Kaymer, who was the top-ranked player in the world at the time, failed to make the cut; and Tiger Woods and Rory McIlroy went back-and-forth in sharing the lead during the final round. But Woods ended up finishing four strokes behind Schwartzel, while McIlroy finished 10 strokes off the lead.

Phil Mickelson finished three strokes ahead of Lee Westwood to win his third Masters and fourth major title at the 2010 edition. This season, Lefty has his sights on completing the grand slam with a win at the U.S. Open. Doing so would give the five-time major winner a victory in each of the four major championships (Masters, U.S. Open, Open Championship and PGA Championship) in the span of his illustrious career.