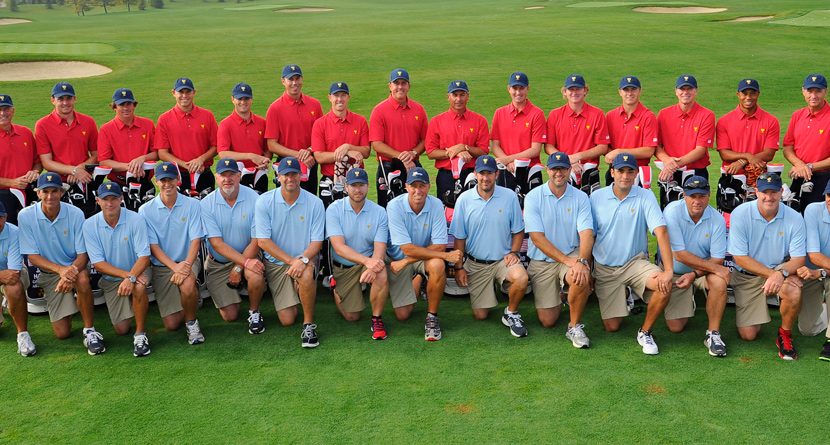 The U.S. Team is the heavy favorite over the International Team at the Presidents Cup this week at Muirfield Village in Dublin, Ohio, listed at odds of -300 at the LVH SuperBook. The Internationals are the +250 underdogs.

Related Link: 9 Things You Need to Know About the Presidents Cup

The Americans have won all but one of the Presidents Cup tournaments since the event began in 1994. The International Team’s lone win came 15 years ago in Australia.

“On paper, everything seems great,” Snedeker said. “But it’s not played on paper. Those guys are going to be very well-coached. They’re very, very good players with a track record at Muirfield. They probably have a better record, taking Tiger out of it.”

Speaking of Tiger and dominance, Woods has won the Memorial at this course five times.

Betting interest on this event is scant.

“We don’t even get as much action on this as we do a weekly even,” Jeff Sherman, who sets golf odds at the LVH, told The Linemakers on Sporting News. “The Ryder Cup is the only exception of a team-play event where there’s interest in it. The Presidents Cup, there’s really minimal action, because all you have is a two-way play in odds to win. People like to bet the long odds on the golfers to win each week a lot more. …

“The only (significant) action we get are the Sunday singles matches, and that’s somewhat limited because it’s the same market everywhere. On a weekly tournament, I can put up different matchups than the place down the street.”

Not to mention, it’s football season.

If you’re inclined to make a play on the Presidents Cup, though, here some thoughts from The Linemakers’ Brian Blessing:

“The U.S. should win, but -300 is absolutely an inflated number.

“In matchups, two players for the Americans are on my radar. The calm demeanor of Jason Dufner suits him well in this type of format, and he is a must use. The complete other end of the spectrum is Keegan Bradley, who gets fired up and plays off the emotion of the home crowd. Look for him to be paired with Mickelson again.

“For the international team, Marc Leishman is a sneaky-good player and could bring home a few nice plus prices.”