The Secret: The Cult of Ball Striking 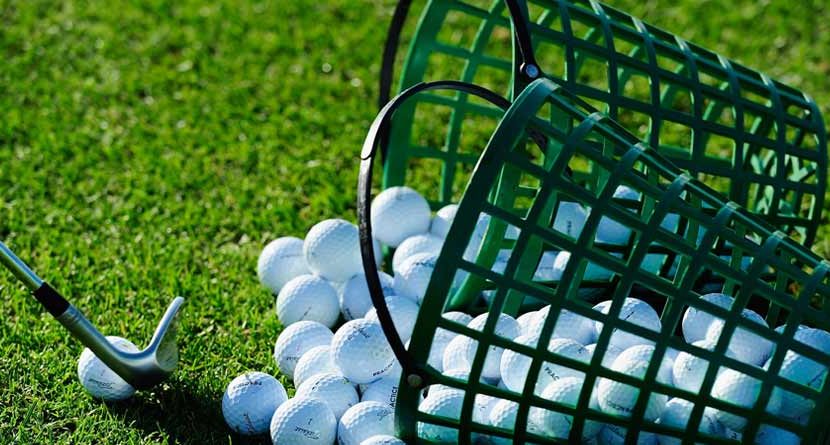 There’s something about the act of conveying a white, dimpled ball from one point to another by means of a swishing metal rod that torments the imagination. An act so complex as to preclude the possibility of mastery, yet just simple enough to seduce us with its possibility, we can’t leave the golf swing alone.

For that venerable New Englander John Updike, golf could be likened to a “non-chemical hallucinogen” that “… breaks the human body into components so strangely elongated and so tenuously linked, yet with anxious little bunches of hyper-consciousness and undue effort bulging here and there, along with rotating blind patches and a sort of cartilaginous euphoria – [it] so transforms one’s somatic sense, in short, that truth itself seems about to break through the exacerbated and, as it were, debunked fabric of mundane reality.”

For Updike, whose imaginative wanderings returned again and again to the golf course, all the frustration and discomfort we call Sunday afternoon held the promise of some ineffable greatness. The wretched weekend hacker was never more than a clutch putt or bombed drive away from a face-to-face meeting with big-time, capital-lettered Truth. And he had a point.

The pure strike, the clean delivery of accelerating clubface to ball: these are sports’ most potent opiates, gateway drugs to a life squandered on second-hand swing thoughts and nonsensical YouTube videos.

At the risk of sounding like a plus-foured chauvinist, I’m going to suggest you don’t really get this with other outdoorsy pasttimes; the compulsion to know and mimic is always that bit weaker, the high points less tantalising and unstable.

Consider the viewing experience. Baseball, soccer, tennis or any number of their athletic cousins, we’re content to consume dispassionately, from the distance of a second-tier seat or slumped somewhere in front of a radiating screen. Tactical analysis may play its part, wafting through conversations or throbbing away in the background of a telecast, but questions of technique remain largely submerged beneath bigger, more consequential storylines.

With golf, mechanics often become the narrative itself, the lens through which we view Tiger Woods, say, or Phil Mickelson.

To attempt a scientific dissection of Lionel Messi’s otherworldly skill, by imposing on his diminutive frame a color-coded maze of plane lines and angles, would seem ridiculous. We accept his constellation of attributes – balletic grace, uncanny spatial relations – as the product of something largely beyond our ability to reproduce or even understand. There are basic principles at work there, sure, but the magic, those sparks of inspiration and innovation, are thrown up only in the presence of an intuitive other – some genetic or psychological x-factor – and we’re happy to leave it at that.

The same evidently can’t be said of golf. Maybe it’s simple vanity in action, maybe it’s the lure of a scoring system that allows each player to succeed on their own narrow terms, but golfers are obsessed with accounting for and rolling back the limits of their own performance. No sport is quite so self-absorbed, or places so much stock in anguished pseudo-science and lonely introspection. It’s a never-ending quest for the swing thought, the programme, the move. The secret, in short, to the riddle posed by the “two turns and a swish” that constitute the modern swing.

NFL fans get some soft patter about calls and running lanes. We get the supercharged techno-geekery of the BizHub Swingvision camera and a telecast never more than two minutes away from some chatter about spine angles and swing planes.

Though golf’s fixation on analysis can be excused – this, after all, is a game unceasing in its demand for more – it remains irritating nonetheless. Shelves of technical manuals; gigabytes of needlessly convoluted demonstrations and explanations; camcorder odes to the “philosophies” of Hogan, Nicklaus and Snead. It’s all so arbitrary, yet the trade in doctrinaire tutelage remains robust. Schools of thought continue to rise and fall on little more than an optimistic interpretation of history and a liberal sprinkling of buzzwords.

Never mind that Moe Norman’s many, often crippling, ideosyncracies bore the hallmarks of high-functioning autism – he was playing a brand of golf that, for just a few easy payments, you too can take to the course!

Try as we might, golf cannot be reduced to a single programmatic vision. At any one time, hundreds, if not thousands, of unseen forces are pushing a pulling the golf swing, having their way ball flights and bounces. Beyond the threshold of what are referred to as “the fundamentals,” there’s little in the way of universal knowledge to be communicated, no method that can be relied upon to bridge the gap separating the look and feel of a swing.

The Secret, if golf can be said to have one at all, is that ball-striking remains as much a trick of the mind as the body. The market in tips, philosophies and fixes is in fact a sort of lottery, where dumb luck and coincidence help pull the occasional bargain from mounds of snake oil. Cold comfort to those in the habit of idling away their lunch hours in pursuit of inspiration on YouTube, I’m sure, but it could be worse: what would golf be, after all, without its sense of mystery?