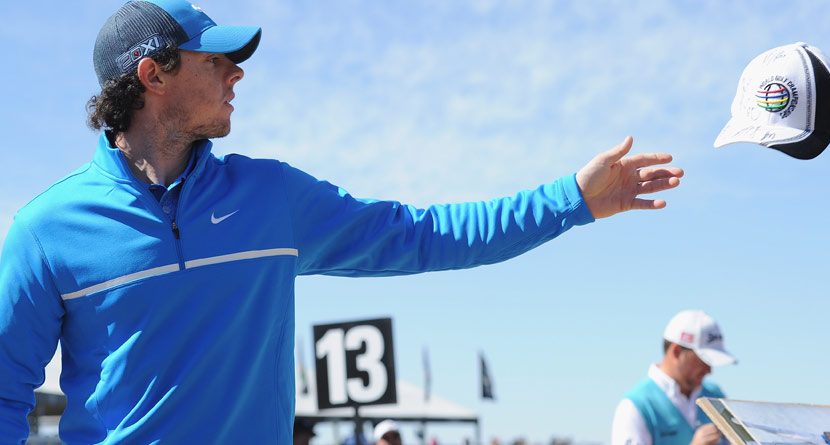 For those who may not have taken notice, Matt Kuchar affirmed once again that he has a game made for golf’s bigger stages.

Though Kuchar’s romp through the WGC Match Play Championship produced his fifth PGA Tour victory, each of the past three have come with higher stakes at play. He opened the 2010 FedEx Cup playoffs by winning The Barclays, following that with The Players Championship last year.

Of Kuchar’s nine top-10 finishes in 2012, seven came in what would be considered the tour’s marquee events – the four majors, four World Golf Championships events, The Players and four FedEx Cup playoff stops.

It’s a glimpse of what so many expected 15 years ago, when Smilin’ Matt seemed so unflappable in his first visits to the Masters and U.S. Open. The promise had faded, though, during a five-year rough patch that included a trip to the then-Nationwide Tour. No longer.

• The Takeaway: While early focus centered on Rory McIlroy, Tiger Woods and European Ryder Cup heroes Ian Poulter and Justin Rose, few noticed Kuchar was a quarterfinalist in each of the previous two years. He went 2-1 at last year’s Ryder Cup, too. When Mahan took him to the 17th hole in the final, it was just the second time Kuchar had played it all week. He never saw No.18.

• The Shot: With Mahan staring at birdie after striping his tee shot at the 219-yard, downhill 12th within 10 feet, Kuchar ripped an 8-iron that came to rest 15 feet from the flagstick. Kuchar drained the birdie putt, keeping his 2-up advantage as Mahan tried to rally.

• Quote: “Match play I find to be such an amazing, unique format. … It seems like each hole there’s so much momentum riding and so much pressure on every hole. To come out on top after six matches of playing [among] the top 64 guys in the world, it’s an incredible feeling.”

• The Takeaway: After a mediocre second half to 2012 cost him a spot on the U.S. Ryder Cup team, Mahan is squarely back on track after a solid West Coast. He hasn’t placed lower than 16th in five starts since returning from Hawaii, tying for 8th at Riviera before heading to Dove Mountain.

• Trends: Until running into Kuchar’s buzzsaw, Mahan had not trailed in any of his 10 previous matches dating back into last year’s title run. He outlasted Zach Johnson in a 19-hole tilt to begin his 2012 march, then never fell behind in five subsequent matches – and his first five this year.

• Quote: “Absolutely every facet of your game was tested today. Kooch, I think he deserved to win because he did a better job in every facet than I did.”

• The Takeaway: Day’s third top-10 finish on the West Coast put aside any concerns from a disappointing 2012 brought on by nagging injuries and the adjustment to being a first-time dad. He tied for 9th in his season debut at Torrey Pines, then finished 6th at Pebble Beach after a closing 67.

• Trends: One more top-10 finish will match Day’s collection for all of last year. His track record on the Florida Swing, though, has been less than stellar – no finish higher than a tie for 20th, with four missed cuts and two withdrawals.

• Quote: “I think the whole week in itself is a positive week for myself. I played good golf against great golfers.”

• Rory McIlroy: Concerns about his equipment change will continue to dog the young icon until he plays a weekend round. Two months into 2013, McIlroy has played just 54 holes of competitive golf – missing the cut at Abu Dhabi and getting bounced by Shane Lowry in his Match Play opener. Now he must defend a title at this week’s Honda Classic.

• Robert Garrigus: In his Match Play debut, Garrigus showed he could be a man to reckon with in future years as made a run to the quarterfinals. The Phoenix bomber likes the idea of standing on the tee and knowing a 9 isn’t going to cost him anything more than one hole. Now he just has to qualify for future brackets.

• Steve Stricker: The wily veteran came to Dove Mountain following a six-week layoff, part of a plan to cut his schedule by nearly half and spend more time with his growing kids. So what happened? A run to the quarterfinals. Combined with his runner-up finish at Kapalua, it seems Stricker knows what he’s doing.